The University of Louisville will wear special adidas uniforms for its Nov. 14 season opening men’s basketball game against Minnesota in the Armed Forces Classic, to be played at the U.S. Coast Guard’s Air Station Borinquen in Aguadilla, Puerto Rico.

The limited edition uniforms feature a white and grey camouflage pattern with red and light blue trim as a tribute to the Coast Guard’s red, white and blue colors and racing stripe.  The back of each player’s jersey displays the Coast Guard motto of “Semper Paratus,” which translates to “Always Ready.” 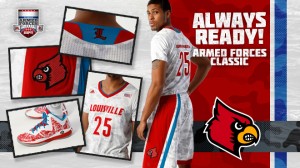