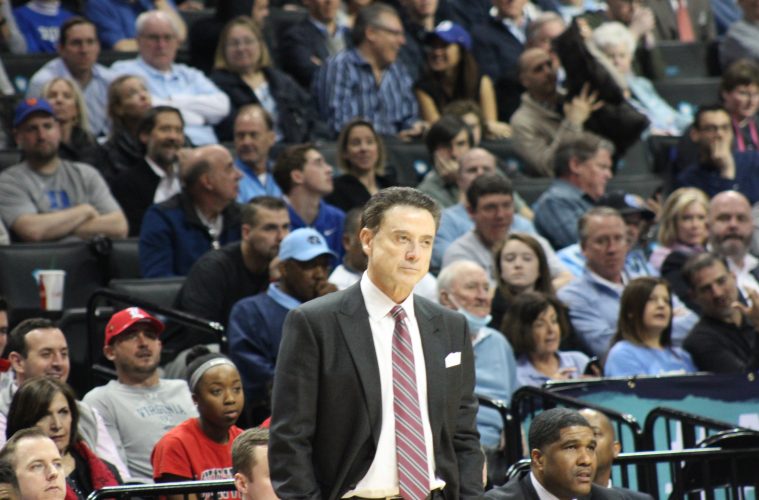 THE MODERATOR: We’ll go ahead and get started with a brief opening statement from Coach Pitino.

COACH PITINO: I thought we played well enough to win the game tonight. We certainly have improved a lot offensively, but we still have some free-throw shooting woes, which really hurt us. If we improve that area and play the same type of offense that we’re playing, I think we have a chance to go pretty far.

Q. Deng, you looked like you were able to get a lot of penetration, a lot of layups early. What was so effective about that?
DENG ADEL: In the first half, we did a good job of rebounding and pushing the ball. When we ran, opened up the lane, and we were just trying to move the ball and get easy layups.

Q. Coach, you had a 12-point lead and almost run him out of the building, four or five transition baskets. They looked a little leg dead, having played yesterday. How did they get back in the game and win?
COACH PITINO: Well, we played four games to win the Big East, and I think Connecticut one time played five. If they’re leg weary, then they’re not in very good shape. So I don’t buy that.

We missed a key blockout on the line. They missed a free-throw. We didn’t blockout, they threw it back out and got a three. It was a key play in the game. If you don’t block out on the foul line, there’s something wrong.

Q. Talk about Kennard’s performance and how he seemed to take over at the end.
COACH PITINO: He’s a great player. I love him. I recruited him in high school. We gave him his left hand a little bit too much tonight. We didn’t at Louisville. I love his game.

Sometimes I look at rankings, and I can tell you from spending eight years in the pros that what you see on this.net or this.net is not what the general managers are thinking in the pros of who to draft. That’s just saying who the best players are, in their opinion. I’ve always felt he was, from an offensive standpoint, one, two, or three best players in the country because he really knows how to play the game of basketball. He really head fakes well. He passes well, and has great feel for the game, and he’s a great foul shooter as well.

Q. Rick, on the foul that was called against — on you, your team against Grayson Allen that sort of touched off that little Grayson Allen sequence there, you seemed to be indicating that you thought he cleared off with his free arm. Was that the case? And what was your view of that entire sequence?
COACH PITINO: I felt early on in the play he fended off with his arm, but I’m okay with that call. I’m not okay with Donovan Mitchell’s block shot and the fact that he got his other foul, which he didn’t foul him on either play.

So that play I’ll live with, but you take your best player and put him to the bench on plays that I believe weren’t fouls. Now, I watched one of those, the second one. It’s just referees play a huge factor in games. They really do. It’s not often talked — sometimes it goes in your favor. A couple times this year it went in our favor, and of late it hasn’t gone. They can play a huge factor by putting your best players on the bench at times if it’s a foul or if it’s not a foul.

They’re a good crew. They’re a good refereeing crew. I thought he used his arm to fend off, and then they got the real foul after the two dribbles. They made the right call.

Q. Just to jump off of what you’re saying about Luke Kennard, do you see him as the best pro prospect on that Duke team?
COACH PITINO: Oh, I don’t know. Mike would be better answering that. It’s either him or Tatum, obviously. Certainly, they’re both great. It all depends what type of team you have. Like if you’re San Antonio, and they had a high pick, he fits in so well with that scheme. It all depends on what team and what you need, as far as that’s concerned. I think he’s going to be an outstanding pro, no question in my mind.

Q. Rick, you forced 18 turnovers in January against them. They handled the ball better today. What did you see as the difference in that regard?
COACH PITINO: Well, we didn’t press as much in this game. We pressed a little bit, not much, because when you play every day, it’s tough to press every day. It’s a little bit different. You know, it’s — we lost a game mentally tonight a little bit.

The obvious thing is you pick up the stat sheet, and even some of those one-on-ones, we lost the game — could have won by 10, 15 points if we make our free throws. That’s the obvious thing.

There’s three or four major mistakes we made in the game — not switching out, not blocking on the three, not blocking on the foul line, giving up a three, coming in on the strong side, giving up a three. And then running a play we practice every day at the end and then not getting in the right spot. So those are things this team lacks right now. Because they give you a lot of effort, great heart, but mentally they’re just not where they need to be.

Q. I know you’re coming off this game, but just your thoughts on the value of having the ACC Tournament here in New York as opposed to, say, Greensboro. Obviously, Coach Boeheim had some strong statements about that yesterday.
COACH PITINO: Well, I can’t be as eloquent as Jim. Let me say this. You have to understand what it’s all about because, when there were eight teams and most of them were on Tobacco Road, Greensboro is a great town and a great fit. But when you’ve got a corporation, it’s now not about — for us, we don’t care if it’s Greensboro, Washington, New York. We don’t go out. We’re sequestered away, watching film, getting ready.

Greensboro was great for an eight-team league on Tobacco Road where all the teams are from, they gather together, and it’s one big happy fraternity. But now we’ve got them out of the fraternity, it needs to be a good environment, and this certainly is a good environment.

Q. Do you think there’s any added benefit, media coverage or recruiting-wise, to having it here? Coach Williams was saying because of social media, you could have it anywhere, and it would still be covered heavily.
COACH PITINO: No question about that. That’s a true statement. But I go back to the fans. You have the best restaurants, the best hotels. It’s very tough to have this many teams in small towns. Charlotte is going to be great. And Greensboro is a great town. It’s like a big convention. Why do they have so many in Las Vegas and Napa Valley and all those places? There’s a reason for that.

Thanks for distracting me from this game.

Q. Talk about a quarterfinal game and the quality of the play. Did it almost feel like a championship game with the intensity?
COACH PITINO: Yeah, we really played well today. I can tell you, I’m heartbroken we lost today because we’ve become a very, very good offensive basketball team, and we have struggled with our offense. We always were decent at times at defense, and we’ve become a very good offensive team.

But we have got to cure these free-throw shooting woes because like last — you’ve got to win six games to win a National Championship. You can’t — like last game we shot free throws well. Next game we shoot — you can’t do that. You’re going to have to shoot a decent percentage for six games to win a National Championship because it’s like a turnover. And although we only turned it over eight times in the game with 15 assists, that’s a really good offensive production, and we shoot 48 percent, that’s good. But if you shoot 15 for 26, some of those being the first half of one-on-one, you’re beating yourself where they go and they shoot 22 for 31.

Q. Coach, when you met with us way back at Operation Basketball, you said, among other things, fans don’t like to hear that maybe you’ll be better next year than this year, but you said you came here thinking you could win this tournament. Did your guys surprise you with how far they came given what you said back in the preseason?
COACH PITINO: Well, we had very little experience returning, lost our two leading scorers. Only Q and Mango have any tournament experience. It showed a little bit tonight, not in the missed free throws because we’ve done that before. It showed in the missed switches, the lack of blocking out, all the little things.

And that will be a great lesson going into this game. When you’re playing in the ACC — we wanted to really play Carolina badly because it was one of few games we didn’t play well, and we wanted to have that opportunity. But Duke stopped it. Everybody from your neck of the woods will love Duke-Carolina talk. So it’s good. You put the hex on us.

Q. Your big guys’ length really bothered Duke today. You got credit for six blocked shots, and they may have missed a couple. You guys were able to convert that into fast break baskets. Just talk about that as a weapon going forward.
DENG ADEL: Our bigs are great at blocking shots. Usually, when we get beat, they step up and block the shot. But it’s up to us as the guards to switch out. Once they take our man, we got to block out the big guy. And then getting guard rebounds helps us out because it makes it easy to push the ball.