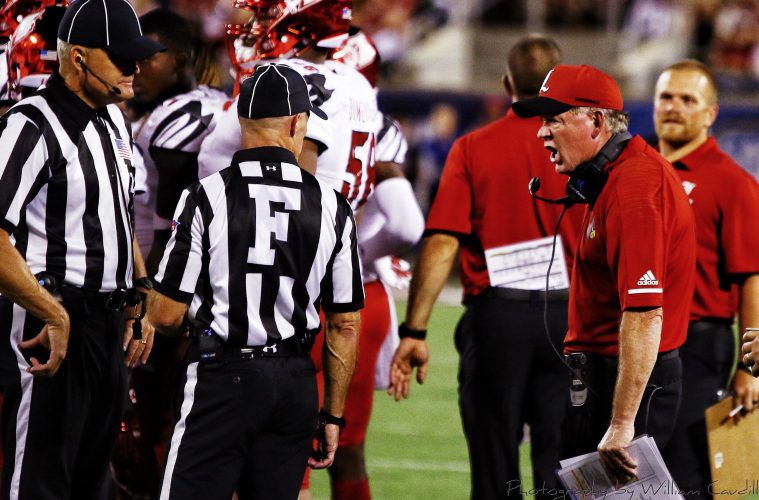 BOBBY PETRINO: We pressured their quarterback at times, didn’t make the tackles when we got there. Offensively we weren’t able to move the ball like we want to, and we’ve got to get back on the practice field and get all that fixed. We have had two good practices, came back and practiced Monday night and yesterday. I like this football team. They work hard. They’ve got a good attitude. So we’re looking forward to coming back and playing at home.

Q. Obviously you understood what a tough opening opponent you had. In your experience, does a team and a coaching staff learn more about themselves with a really tough opener or an easier opener where you get to see more people? What’s your philosophy there?
BOBBY PETRINO: Well, we’ve enjoyed opening up with a big game and a game that means something. I think it helps us in the off-season. I think it helped us in our preparation for the opener. Obviously they’re a great football team, so I’m hoping that it helps us in the fact that we’ve been in the battle and competing with guys that are very, very talented and very fast. I think it’ll help our quarterback because I think the speed of the game was something that will now slow down for them and won’t be as fast as it was against Alabama.

Q. We hear all the time that coaches say teams make a big jump from week 1 to week 2, maybe their biggest jump. Do you subscribe to that?
BOBBY PETRINO: I hope so. I hear it all the time. Every year it comes up after your opening game. I’m not sure whoever said that the very first time, that you make the most improvement between game 1 and game 2, but it sure stuck, and everybody always says it every single year.

Q. Can you describe the challenge for the defense now moving forward without Jon Greenard for an extended period of time it seems?
BOBBY PETRINO: Yeah, you know, Jonathan was doing a great job leading us, has been around for a long time, but he really took it personal to be voted as a captain and provide the leadership, not only by example but by how he acted and how he showed the other players what to do. He’ll be missed, but you have to move forward. Tabarius Peterson is a guy who has all kinds of talent, and he needs to be able to step up and improve on a daily basis in practice. I think the greatest challenge for us is to find the edge rusher that Jonathan was and give guys opportunities in there to come along and get better at it.

Q. Just talk about Indiana State, getting ready for that game on Saturday. Talk about them and what’s the challenge for them on Saturday?
BOBBY PETRINO: Yeah, well, watching them in their opening game, I was impressed with how they’re coached. They do a lot of really good things. They do things right, and they made huge improvement from their season a year ago. You know, most of our week this week is going to focus on us and doing the things that we need to do and getting better as an individual player, getting better each group of running backs, wide receivers, O-line, quarterbacks. It’s really about us improving and being a better football team come Saturday.

Q. And does that also mean getting the running game established? I know Alabama had a good defensive line, but that’s kind of hard for the first game of the year. Is that something you have to work on this weekend and get that going?
BOBBY PETRINO: Yeah, very, very important for us to get the run going and really establish an identity, what it is that we are going to do to run the ball.