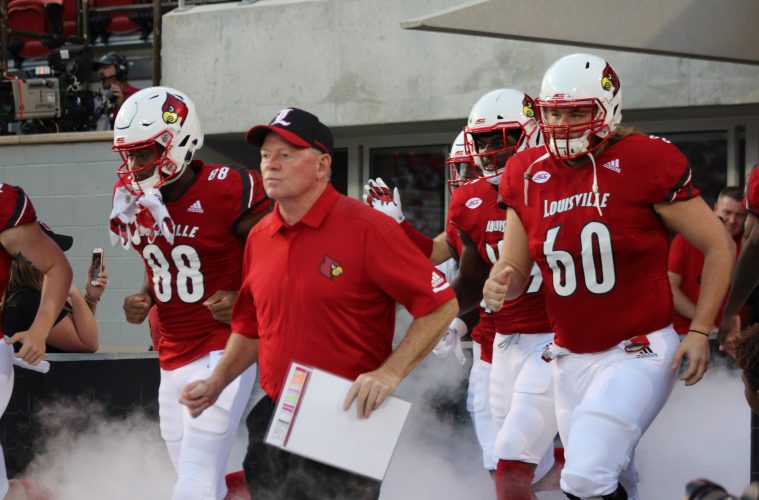 COACH PETRINO: We’re coming off a tough loss at home against Florida State. We did make a lot of improvement in the game. I felt like offensively we were moving the ball and receivers were making plays. We got our running game going. Defense has been playing hard and did a good job of stopping the run and tackling well. We did give up a couple of big plays that ended up hurting us.

It’s a short week for the Georgia Tech game so we had to move straightforward to that. On Sunday night we came in, met, had walk throughs. We know that Georgia Tech presents a unique challenge with its option offense.

We’ve had good practices and our players are working hard. So we’re looking forward to the game Saturday — Friday night.

Q. With the rise of Boston College and Syracuse and Duke doing well, do you see more parity this year than you have in previous years, or is it just pretty much the same as it’s been?
COACH PETRINO: Yeah, you know, we haven’t really got to watch much video on anybody else at this point in the year. A lot of times you get to see other teams as you’re going. But their records are good and they’re playing well and that’s the one thing about our conference we know is that it’s going to be a challenge week in, week out.

Q. Should Clemson not be the league champion, that would still leave the ACC with a good chance of having a college football playoff team, right?
COACH PETRINO: Yeah, I don’t have a crystal ball. I think we have a long way to go. We’ve got seven games left to go and everybody’s competing one week at a time.

Q. When you look at Georgia Tech, what jumps out at you?
COACH PETRINO: Well, obviously the option attack that they have and how well they execute it and the different things they do off of it.

We have to do a good job of being very disciplined, doing a good job with our eyes and really running full speed to the ball. Defensively they’ve done a good job with their front and their movements that they do. So you have to be able to block their different pressures and line movements.

Q. Have you had trouble — they changed their uniforms and they’re in gold numbers has that been hard to see when you guys are looking at the tape?
COACH PETRINO: It actually has been very hard to see and not be able to see what those numbers are. It’s been difficult for us on video.

Q. What kind of problems does that cause for you?
COACH PETRINO: I mean, we’re always going back and forth trying to figure out what that number is, what that guy’s number is, and I know that they submitted the uniforms to the conference and we’re cleared with them because there was a black trim around the numbers. But it’s hard to see that there’s a black trim on the video.

Q. Obviously the late interception notwithstanding, do you feel like Pass did some certain things in that game, did you see improvement in certain areas that made you think, yeah, I think we’ve hit on something offensively now?
COACH PETRINO: Yeah, he made some real good improvements in the way first the way he came out and started it and his ability to stand in the pocket and get hit and complete passes I thought really showed maturity and toughness and something that you really have to have at the quarterback position.

His decision-making and his vision improved a lot. And he moved the ball around. He got a bunch of completions to different receivers and got our tight ends involved and running backs. So we felt like we executed a lot better on offense than we had previously.

Q. You mentioned the short week and with everything that goes into preparing for Georgia Tech’s offense, I’m curious, how much of a challenge is that and what do you change in your preparation because you lost a day?
COACH PETRINO: Yeah, we had to take some time in spring football and work on this. And a lot of it is designed to get an understanding of it but also get it on video and see the different things and took a week out of our preparation in the off-season to game plan for the game. And then it’s just a matter of coming in and doing a walk-through on Sunday night so we were able to get normal practices in Monday, Tuesday, Wednesday.

Q. And physically I know the cut blocks are such a big part of that offense. How do you work on that in practice and also keep the guys safe and does it change in a short week?
COACH PETRINO: Yeah, it didn’t change a whole lot. We actually have a little circuit we have to do for the “D” line, the outside linebackers, inside linebackers, and really focus on being able to get our hands down and shed and then get to the ball. So we try to break it down and do some individual work and then some half line group work on it before you really put it together with 11 on 11.

Q. How have you had to change your approach with the run game or what you expect out of your runners to maybe try to get things going?
COACH PETRINO: We’ve had so many different guys back there. We thought we would have Dae Williams and he would get off to a good start with us and he dinged up a little bit. Trey Smith started the Alabama game and was playing well and wasn’t able to play in the second half. I thought last week that Trey did a good job in inside running and power running.

And then we got Hassan Hall involved, a true freshman that has really exceptional speed, is very, very fast and really good instincts. So we’re just trying to get a package for him that he can really understand and know as a true freshman.

Q. As a follow-up with your quarterback situation, with Jawon, have you found yourself having to find any kind of parallels in terms of bringing him along to maybe when you brought Reggie or Lamar along at that same point?
COACH PETRINO: Yeah, I was thinking going into the season it was going to be easier for him because he had been here for two years. But he hadn’t taken a lot of live snaps. It’s always different when you get on the field and things are going so fast and the linebackers are blitzing A gaps and your understanding how I can keep my eyes downfield and utilize my technique with my feet and so he got off to a rough start, but I do think that he really improved and he’s worked extremely hard in practice. He’s been able to keep a real positive attitude and a workman-type attitude.

So I like the improvement that we see on a daily basis in practice. And I thought last week he finally carried it over to the game.

Q. Citizenship question rather than football this week. With the elections coming up in November, do you feel a responsibility to encourage your players to register and to vote?
COACH PETRINO: We already do that. We always feel like that’s part of the great country that we live in, that you have the opportunity to contribute and do your part. So it’s a great question and a great point, that that’s part of being a citizen of the United States.