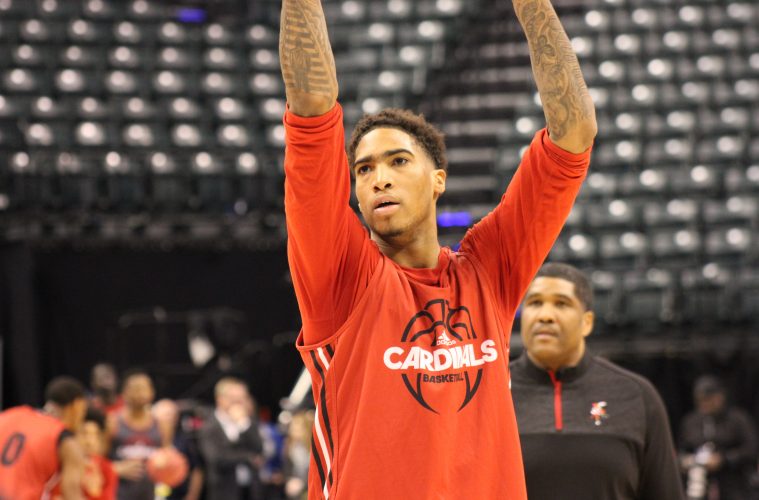 Q. For Anas and Ray, what stands out on film and what you saw yesterday from Michigan, specifically their offense?
ANAS MAHMOUD: They shoot the ball really well, all five positions. Watching film yesterday, we realize we have to limit their attempt, not even contest it. We have to make them do something else other than shoot the 3.

Q. V.J., rough start in the game yesterday. How important will it be to reverse that and avoid that in tomorrow’s game against Michigan?
V.J. KING: I think we kind of started off slow just because kind of the first game of the tournament, just jitters. I feel like that lasted throughout the whole first half, but we definitely picked it up and started playing our game.

We have to get off to a fast and a good start this game because if we get down to a team like Michigan, they’ll really put it on it, and it will be hard to come back if we dig a hole like that. It’s important to start out strong and start out focused.

Q. How have you guys fared, in your minds, against in type of team that relies on the 3? Do you think it’s a good matchup for you?
V.J. KING: Definitely. They play at sort of the pace we like to play at with the way they shoot the ball, but it’s going to be difficult for us to guard that. We have to, like Anas said earlier, limit the attempts and lock in on defenses. Offense comes and goes. If we play the defense we know how to play every single game, we have the best chance to win.

RAY SPALDING: Just like what Anas and V.J. said, they’re similar to our tempo, the game we like to play. I think really shoot the ball well. I think the way we play defense and how we’re going to lock in today with the scouting in practice today, we look forward to trying to stop that.

Q. Out of curiosity, Rick Pitino compared them to the Golden State Warriors. Who would you compare your team to, what NBA team, in terms of style?
RAY SPALDING: In terms of style is a good question. I’m more of a Sacramento Kings fan. I don’t know that we compare to the Sacramento Kings. Let’s go with the Cavs.

ANAS MAHMOUD: It’s tough to compare, you know, college to elite, especially when you’re focus so much on the defense. I don’t think people in the NBA focus as much on defense as college basketball do.

We always talk that we try to pass the ball as well as the Spurs basketball and move the basketball well. So I hope we can reach that level.

Q. Obviously, your coach has been coaching these tournaments since long before you guys were born. Do you feel that when he’s preparing you and talking to you? Do you get that sense of just that vast knowledge and experience he’s bringing to this?
V.J. KING: Definitely, just because it’s definitely tournament time. He’s definitely turned it up a notch. With him, it’s always the same with how we prepare, with how he coaches, with his intensity and passion. It’s the same with every team. If we were playing the first game for exhibition game to a game like we’re playing tomorrow, it’s always the same.

He’s definitely turned it up a notch because he wants to win. He sees the potential in us and knows how far we can go if we just play the way we’re capable of.

ANAS MAHMOUD: Since I’ve been here, everything

We kind of picked up on that, and we just listened to him as well as we could. Like V.J. said, he really picked it up going into the ACC tournament after our first loss playing last week before the NCAA started. Because he knows how far we can go and just he’s really picking it up on us.

Q. Describe the processes you guys follow in one of these tournament-type atmospheres. When you come off a game, describe what you do when you’ve got a game the next day or as is the case with Michigan tomorrow, describe the processes you guys go through.
In other words, do you start preparing for a team like Michigan anticipating you’ll be playing them, or do you wait until after you play the game and start preparing and then what that preparation consists of?

RAY SPALDING: With Louisville, preparation is very key in this program. We go by three Rs; refuel, refresh, recover. We really focus on that.

Once we won the game yesterday, it was onto the next one. So we dial into who we’ll play, who we could potentially play. Like before we even came to the tournament, just preparation the coaches were going through and the scouting report they have on several different teams we could play, it was crazy, but we’re really prepared well.

ANAS MAHMOUD: We never really kept any team — coming in last week, we looked at the bracket. We see who we potentially can play, but we never really prepare for any other team other than Jacksonville State. Nothing is guaranteed when you go to the tournament. You have to win every game.

You have to play game by game. Last night, after the game, we went home and ate dinner and started watching film on Michigan. Today, we have a scouting practice and just that’s how our program is. We don’t skip any games, and we literally prepare for every single game.

Q. Ray and V.J., your minutes seem to fluctuate from game to game. Yesterday, you played a lot. Do you think it is matchup-based or how you perform in practice? What determines your role and how do you see it from game to game?
RAY SPALDING: Really, I don’t know. That’s a good question. I guess however coach is feeling with the game, how the game style is played and how the game is going on with substitutions and minutes. It’s upon him. I don’t look into the minutes and points being scored. My jersey number is called, and I’m told to go in, and I look to produce in some type of way.

V.J. KING: Like Ray said, it’s not really about how we perform in practice, but just how the game’s going on with foul trouble and the flow of the game. Like he said, whenever our names are called, just be ready for however long it is for us to come in and try to contribute in the best way we can for however long we’re out there.