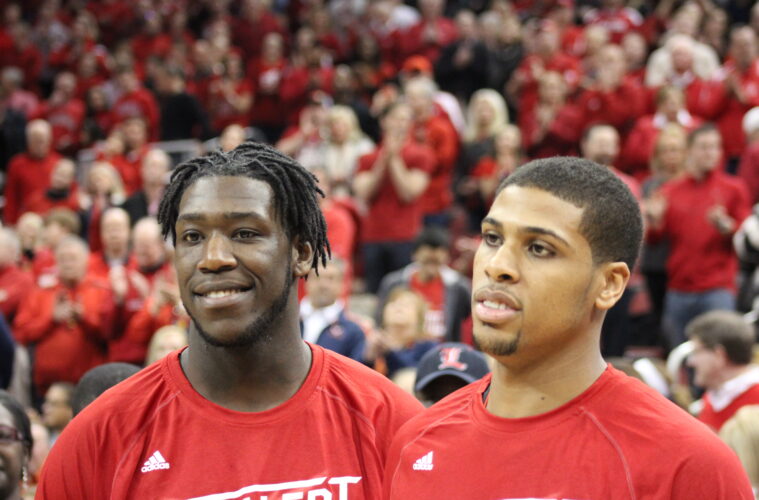 Saturday we say goodbye to Wayne Blackshear & Montrezl Harrell……..  Let that sink in.

In 2011-12, Louisville was coming off of what Rick Pitino called “A Bridge Year”.  Led in scoring by a former walk-on Preston Knowles, Louisville was bounced in the NCAA’s 1st (technically 2nd) Round for the 2nd straight season.  In 2011 by Morehead State, in 2010 by California.  The Cards were OK play from its Small Forward during the 2010 & 2011 years…but nothing like what the Cards enjoyed during a 7-year run from 2003-2009 with Francisco Garcia & Terrence Williams.  Wayne Blackshear was the promise to change all of that.

Hailing from Chicago’s Morgan Park. Wayne Blackshear was the 2011 Chicago Player of the Year and was a Parade All-American and McDonald’s All-American.  And then Wayne injured his shoulder, and while the Cards struggled and lost 5 of 7 during the 2012 the anticipated debut of Wayne Blackshear allowed fans to HOPE for more.  His debut came during February at the end of a 6-game win streak on the road in Morgantown…13 points 4 rebounds in 20 minutes of play.

After West Virginia Wayne struggled to get on the court for many minutes.  Rick Pitino reported that Wayne had stiffness in his shoulder and also struggled with his weight and conditioning.  “Fat Wayne” became the moniker dubbed by the fanbase.  Louisville lost 4 of 6 heading into the Big East Tournament….and then reeled off 8 in a row winning the Big East Championship and reaching the Final Four in New Orleans.

Wayne’s two dunks in the Final Four vs. Kentucky gave the Cards energy and Louisville used that as a catalyst to tie the game 49-49 with 9:12 to go in the 2nd half despite trailing by 13 five minutes prior.  Of course, Louisville would go on to fall in that Final Four as a decided underdog but the promise of Wayne Blackshear was realized, and one of the winningest stretches of Louisville Basketball history was underway.

Thank You Virginia Tech! In the Spring of 2012 Virginia Tech curiously fired Seth Greenberg, and Montrezl Harrell sought his release from the Hokies. Louisville found itself with an off-the-radar Power Forward with raw ability and a can’t quit motor from Tarboro, NC.

From the beginning of 2012-13 both Wayne & Montrezl played major minutes.  Everyone knows the magic of the 2013 run of 16 wins in a row.  But the Big East Tournament Championship would not have been possible without the breakout performance from Montrezl Harrell in a whirlwind comeback performance vs. Syracuse.  Wayne Blackshear, in his 2nd Final Four, stepped up huge in the 1st half vs. Michigan when Russ Smith picked up his 2nd foul and Rick Pitino played both Luke Hancock & Wayne Blackshear together.  Wayne had 8 points in 19 minutes vs. Michigan in the title game……….Montrezl Harrell had 2 points.  But oh do we remember those two points!

I’ve never heard a sports venue with a sharper sound after that Montrezl Harrell dunk.  There may be some more powerful, or more acrobatic, or more difficult.  But there may never be a more important or iconic dunk than Harrell’s 2 points in the 2013 National Championship vs. Michigan.

Wayne & Trez at this point were staples in the Louisville line-up.  Montrezl Harrell was beginning to outshine fellow Power Forward Chane Behanan, and Wayne’s steady play allowed the Cards consistency throughout. Louisville ROLLED through the 2013-14 season with little resistance, including the dismantling of eventual national champion UCONN, not once….not twice….but 3 TIMES during the season.  The Cards would go on to win its 3rd consecutive conference championship and would fall in the NCAA’s Sweet 16.

These Cardinals the past 4 seasons have won more games than any other program.  This year, Wayne Blackshear has been the steady hand.  Montrezl Harrell has been the focal point and the enforcer.  Can this year’s group go on to win its 4th Consecutive Conference Title?  Can they make a deep run in the NCAA Tournament and reach the Final Four in 3 out of 4 seasons?

Whatever those answers are, the legacy of Wayne Blackshear as a Louisville Cardinal is cemented.  His attitude, approach, and demeanor are reflective of the personality that Louisville Basketball strives for.  Wayne is on the cusp of becoming a 1000 point scorer…but the more important notable is that Wayne Blackshear is 10-0 in Conference Tournament games (3 consecutive championships), 12-2 in the NCAA Tournament, and 22-2 overall in the post-season.

Montrezl Harrell leaves Louisville as the ‘King of the Dunk”.  It’s fitting that the player with the most iconic dunk in Louisville’s History also has the most dunks in school history.  We can debate who did it better as a Cardinal, and that’s always a debate for the fans…..but what we can’t debate is, who did it the most?  That’s easily Montrezl Harrell.   Currently with 204 career dunks, and more to come, TREZ has created lasting memories around the rim with an entire catalog of OOPLs and DUNKLs.  Harrell himself also has an incredible post-season record, 6-0 in Conference Tournament games, 9-1 in the NCAA Tournament, and 15-1 in the post-season.

It’s been an incredible run during the tenure of Montrezl Harrell & Wayne Blackshear.  Harrell came to Louisville unheralded and only by chance.  Wayne Blackshear came was the answer to Louisville’s lost hope and then an injury slowed his arrival.  The paths may have been unlikely, the happenstances may have been unplanned, but the results have been beyond the imagination of Cardinal fans.

As a 2004 Louisville graduate I can’t thank Montrezl Harrell & Wayne Blackshear enough for their contributions to my school.  But also being great representatives of Louisville Basketball.   Louisville First, Cardinals Forever.