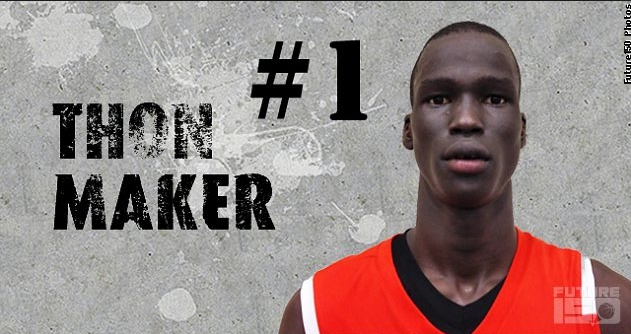 Last year I had the pleasure listening to guest speaker Don Yeager.  Don is a former Associate Editor of Sports Illustrated.  He left Sports illustrated to freelance, and is one of America’s best Sports Journalists.  In addition, he is a motivational speaker who travels sharing stories he has picked up along the way.

Don has always been fascinated by “what makes people great”, and has co-authored many books with people like John Wooden, Michael Jordan, Walter Payton, and more.  If you want to hear what drives these people – from their own mouths, there are no better series of books to check out than Don’s.  You can find them here.

Wooden shared many stories with Yeager over the years – they met regularly for coffee working on a book together – but on this day the story was about Swen Nater.  This is a story that I think could play favorably for Louisville’s chances with Thon Maker.

The Story Of Swen Nater

Swen Nater was from the Netherlands, but before the story begins check out this snippet on Nater’s childhood years from Wikipedia:

“Swen Nater was born in the Netherlands, but his parents divorced when he was three years old. When his mother remarried and the family’s economic situation deteriorated, she and her husband, and Swen’s younger brother moved to the United States, leaving Swen and his sister in an orphanage. After three years it appeared they would remain in the Netherlands until a television show, It Could Be You (a forerunner to This Is Your Life), discovered the situation and brought the two siblings to America to be reunited—on TV—with the rest of the family. At age nine, he was in a new country and didn’t speak a word of English.”

That is EXACTLY how my childhood went, probably yours too.

As Swen aged – he grew, and grew and grew.   He loved fixing cars. He didn’t play basketball and wasn’t terribly interested in sports.   He enrolled into Cyprus Community College and stayed under the hood of his car.   He wanted to be a car mechanic. The Cyprus Community College basketball campus spotted Swen going to class.  How could he not, Swen was 6′ 11″.  The coach insisted that he come out for the team.

The Juco coach persisted and eventually Swen caved. How did the experiment go?

Swen played very little is frosh year but  something clicked over the summer.  While still not considered a high major prospect, Nater earned Juco All-America honors in his sophomore year.  When he was graduating from Cyprus CC, his coach was set on getting him on the UCLA Bruins team.  A team that could do no wrong, winning titles on top of titles, and grabbed any recruit it wanted.  Swen’s coach started selling Swen Nater to John Wooden.

Swen’s coach wouldn’t take no for an answer.

He told John that he not only he’d want Swen, but that he needed him – and so badly that he would give Swen a scholarship.   It would be a mistake not to take him.  Wooden still declined.  John saw a kid that had played basketball for only 2 years.  There were plenty of top recruits to pick from – including Bill Walton who UCLA had just landed.

That is when Nater’s coach dropped the hammer on Wooden.

He told him (paraphrased) “Well I understand that Bill Walton is a great player, but who is going to guard him in your practice? ”  At the time UCLA only had a few medium-sized forwards.  The coach went on to say, “are you really going to stymie Bill’s development by letting him have his way with those shorter players?  Is nobody going to challenge Walton in practice?”

Nater played backup minutes for Bill Walton for his entire career.  In practice everyday, however, Swen gave Bill all he could handle.  Swen kept improving and nobody even knew it.

So that brings us to Thon Maker.

A mobile 7 footer who is wanting push his limits farther than the little guys he has been facing for the past few years.  He wants to work as hard as he can?   Check, nobody works you harder than Pitino.   Looking at Louisville’s roster of bigs – Thon may never face size like that in the NBA – what a selling point.   Mangok (6’ 10”), Chinaunu (6’ 10”), Matz (7’2”), Anas (7’0”) – are you kidding me? Some mobile bigs, some post up bigs – he would see it all, every day, with Rick working him harder than ever.

That is what makes Louisville an appealing option AFTER you get pass Kenny Johnson’s connection and Rick Pitino’s Hall of fame credentials doing the leg work.   This is why I think Louisville might be able to land this uber-talented big man.  Sure, this might be Swen Nater’s story in reverse, but the logic holds true just the same.

But what ever happened to Swen Nater?

The orphan, later re-united with family on a TV show, who wanted to be a car mechanic, played 2 years of Juco ball, limited minutes as back up to Bill Walton for his time at UCLA?

Swen was drafted by the NBA.

Drafted as an almost anonymous prospect who had only played basketball for a few short years.

Check out what happened to Swen, taken from Wikipedia;

Not bad for a guy who wanted to be a car mechanic.