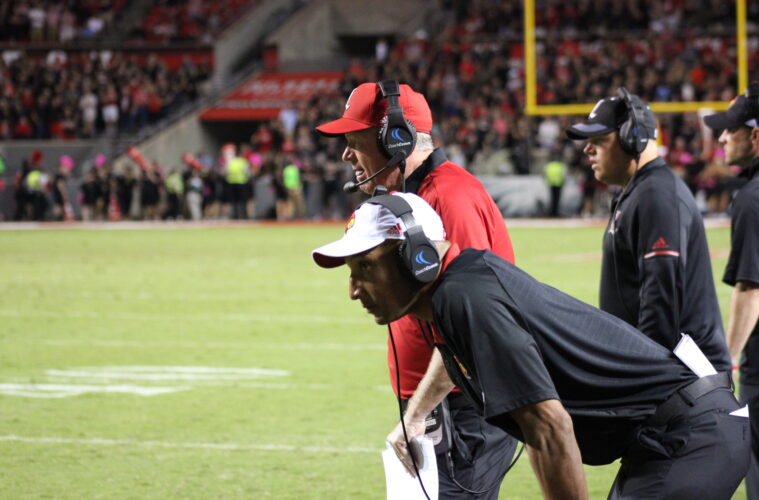 Losing the production of a Heisman Trophy winner isn’t easy to replace, and that’s exactly the task facing the University of Louisville football team this spring.

Quarterback Lamar Jackson, who totaled over 5,200 yards and 45 touchdowns last season, departed for the opportunity to be a high pick in the upcoming National Football League Draft. However, the optimism hinges on the of firepower returning on offense, especially at the wide receiver position, where over 147 receptions and 20 touchdowns return to the lineup.

“This is definitely a good group,” co-offensive coordinator Lonnie Galloway. “I’m looking for three or four guys that will step in and take control of the room. Competition is the best thing for every position. I need everyone to be pushed.”

After nine practices, the Cardinals, who return their top three pass catchers and some young talent, are confident they have all the pieces in place to arguably have one of the best groups in the Atlantic Coast Conference.

“They’re all back,” Galloway said. “It’s the same group, besides Jatavious (Harris) and Tutu (Atwell), who came in early, that were out there on Saturday last season. I expect even more from them this season.”

Entering his third year on the staff, Galloway has the reputation of building strong wide receiver groups and that’s exactly what has transpired in the short-term at Louisville.

With all the veterans in the room, one would expect a bunch of vocal leaders, but Galloway’s group takes a different leadership approach.

“They are all quiet leaders in their own way,” Galloway said. “I try to get them to be more vocal, but they do it in their own way. They push each other and going first in the drills that they do.”

With all that production last season, most of which are back, the Cardinals did have a few youngsters step in last season and contribute when called upon.

One of those rookies who produced in 2017 was sophomore Corey Reed.

A contributor mainly on special teams, Reed showed flashes, catching eight passes for 145 yards, averaging 18.1 yards per catch. He caught four passes for 94 yards versus Murray State and followed up his personal best with three receptions for 41 yards at NC State.

As a second-year guy in a high-powered offense, he’s looking to take a bigger step forward.

“I’m just trying to learn more of the offense,” Reed said. “I’m trying to understand what I have to do at my position and make plays when my number is called.”

With Jackson — one of the best college players of all-time — gone, Reed has been impressed with what he’s seen from the quarterback position this spring.

“It’s a timing thing, we are getting the timing down well with Malik (Cunningham) and Jawon (Pass),” Reed said. “They are both throwing the ball very well and it’s been fun to see their development this spring. There is competition every day.”

The University of Louisville football team will conduct its annual Wendy’s Wonderful Kids Spring Game on Saturday, April 14 at 1 p.m. at Papa John’s Cardinal Stadium. Admission to the game is free.