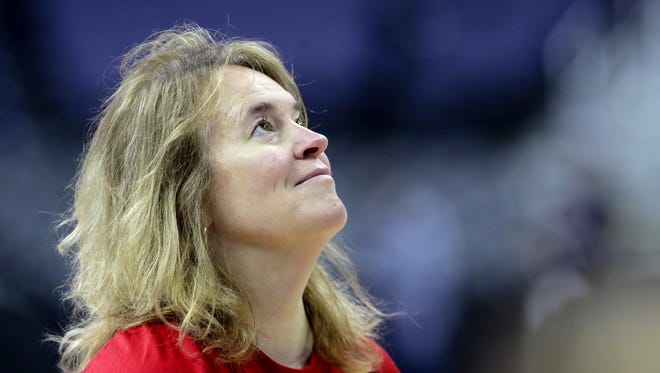 The WBCA Assistant Coach of the Year award is presented to one associate head coach or assistant coach in each membership division who demonstrates commitment to their program, their student-athletes and their head coach; their impact coaching on court; their mentorship and impact on other coaches; and their professional manner and attitude.

“I would like to thank Danielle Donehew, the WBCA and my colleagues and peers for this amazing award,” said Norman. “I would like to thank all of the coaches that I have worked with, including head coach Jeff Walz, who I have worked with the past 14 seasons, as these coaches have been extremely instrumental in my growth, my success and my enjoyment of the game. I would also like to thank the players, it’s because of them that we’ve been lucky enough to have success. Finally, I’d like to thank my family, my parents who always encouraged me to chase my dreams, my husband Geoff and my children Parker and Cassidy.”

“The role of an assistant coach is vital in reinforcing a positive student-athlete environment with encouragement, excellence, structure, security, support and integrity. The WBCA is proud to honor these individuals as our assistant coaches of the year in their respective divisions of membership,” said WBCA Executive Director Danielle Donehew. “Each coach was selected by vote of their peers, and the WBCA celebrates and applauds their lasting commitment to use our game as a platform to positively impact their student-athletes, institutions and communities.”

Norman, in her 14th year at Louisville and her ninth as associate head coach, has served on the Cardinals’ staff since the hiring of head coach Jeff Walz. She has helped the Cardinals to a 382-107 overall record since the 2007 season. In that time she has aided Louisville to nine Sweet 16 appearances, five Elite Eight appearances, and three Final Four appearances, including a pair of national championship contests. Norman has been instrumental in the Cardinals’ recruiting efforts, helping sign the No. 1 class of 2015 that featured three McDonald’s All-Americans; helped pen the No. 6 freshman class in 2016, the No. 4 class in 2017 and the No. 5 class in 2020.

The Assistant Coach of the Year award originated in 2016 and is presented annually.

Visit www.wbca.org/recognize/ to see a list of past recipients of the award.

About the WBCA
Founded in 1981, the Women’s Basketball Coaches Association is the professional association for coaches of women’s and girls’ basketball at all levels of competition. The WBCA offers educational resources that coaches need to help make themselves better leaders, teachers and mentors to their players; provides opportunities for coaches to connect with peers in the profession; serves as the unifying voice of a diverse community of coaches to the organizations that control the game; and celebrates those coaches, players and other individuals who excel each year and contribute to the advancement of the sport. Visit WBCA.org for more details about the association.