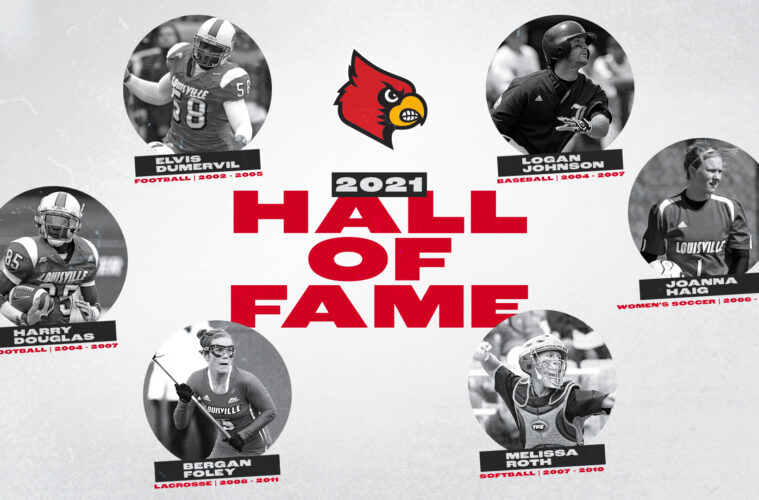 Six To Be Inducted To UofL Athletics Hall of Fame

Six outstanding individuals will be inducted into the University of Louisville Athletics Hall of Fame on Friday, Oct. 22 in the Brown & Williamson Club of Cardinal Stadium.

The event will begin with a reception at 6 p.m., dinner at 7 p.m. and the induction ceremony to follow.  Tickets are $50 per person, or $500 for a table of 10, and may be purchased online through “My Cardinal Account” at GoCards.com specifically at this link:  https://am.ticketmaster.com/uofl/hofdinner. Additional information may be obtained via email at ronee@gocards.com or by calling 502-852-2015.  The inductees will also be recognized at the Cardinals’ Oct. 23 homecoming football game against Boston College.

“We are pleased to honor this exceptional Hall of Fame class who each achieved national acclaim while representing Cardinal Athletics,” said UofL Vice President/Director of Athletics Vince Tyra.  “We look forward to welcoming back and recognizing these elite student-athletes who elevated their respective programs and UofL Athletics.”

One of the top receivers in UofL history, Harry Douglas (2004-07 at UofL) ranks second in career receiving yards at UofL with 2,924 yards and his 223 receiving yards in 13 catches against Kentucky in 2007 is a school single-game record.  The wide receiver from Jonesboro, Ga., earned second-team All-America honors as a junior in 2007 and was twice honored on the All-Big East first team.  Douglas’ 1,265 receiving yards in 70 receptions in 2006 is the second-most by a Cardinal as he helped UofL post a 12-1 record, win the Big East Championship and beat Wake Forest in the Orange Bowl.  His four career 150-yard receiving games is tied for the most by a UofL player and his 15 career receiving touchdowns ranks ninth at UofL.  Douglas was a third-round NFL Draft pick of the Atlanta Falcons and played nine seasons in the NFL with Atlanta and the Tennessee Titans.

Elvis Dumervil (2002-05) was a dominating defensive end for the Cardinals, ranking second in career sacks with 32.  A native of Miami, Fla., he led the Cardinals with 10 sacks as a junior in 2004 when UofL posted an 11-1 record, won the Liberty Bowl and finished in the nation’s top 10 in both polls.  As a senior in 2005, Dumervil was a consensus All-American and won the Bronco Nagurski Award as the nation’s top defensive player and the Ted Hendricks Award as the nation’s top defensive end.  His 20 sacks in 2005 led the nation and are a school record, including a single-game record of seven against Kentucky, and he helped the Cardinals achieve a 9-4 record and Gator Bowl appearance.  Dumervil was a fourth-round NFL Draft selection of the Denver Broncos and was a four-time NFL Pro Bowl selection (2009, 2011-12 and 2014).

A freshman on UofL’s first women’s lacrosse team in 2008, Bergan Foley (2008-11) developed into a prolific scorer for the Cardinals.  She set the Louisville single-season record with 78 goals in 2011 and her 65 goals scored in 2011 ranks fourth all-time at UofL.  Her school-record 265 career goals are 72 more than the second-place figure, and her 288 career points is a UofL record.  The Huntingdon Valley, Pa., attacker was a 2011 IWLCA All-America third team selection, becoming UofL’s first All-American in women’s lacrosse while also earning All-Big East Conference honors on three occasions (2010, 2011 first team; 2009 second team).  Foley holds the top four positions in goals per game for a season, including a top UofL mark of 4.59 per game in 2010.

Joanna Haig (2006-07) was a record-setting goalie after transferring to UofL from Iowa State for her final two collegiate seasons.  She is the UofL career leader with a goals against average of 0.48 and her 20 shutouts in her two seasons is the second-most ever by a Cardinal.  A product of Inver Grove Heights, Minn., she produced a school-record 12 shutouts in 2007 while being named to the Soccer Buzz All-America third team, the CoSIDA Academic All-America first team and the Big East Female Scholar Athlete of the Year.  Haig helped the Cardinals participate in back-to-back NCAA appearances in 2006 and 2007, when UofL posted records of 13-4-3 and 13-6-2, respectively.  She was a member of the US Soccer U-20 and U-21 National Teams.

A second baseman and leader on Louisville’s first College World Series team in 2007, Logan Johnson (2004-07) holds UofL baseball records for career doubles (66), career hit by pitch (74), single season doubles (27 in 2007) and single season HBP (32 in 2007).  He hit .365 with 17 home runs, 27 doubles, 65 RBI and 78 runs scored while starting all 71 games in 2007 as UofL posted a 47-24 record.  The Owensboro, Ky. native connected for four home runs and six RBI in Louisville’s three games of the 2007 College World Series.  The 2007 season not only marked the Cardinals’ first CWS, but was the first time UofL had ever won a game in the NCAA Tournament.  Johnson amassed 34 home runs, 167 RBI and 180 runs scored in his four collegiate seasons.  He played four years of professional baseball following college.

Melissa Roth (2007-10) was an exceptional catcher who helped the Cardinals’ softball team achieve four NCAA Regional appearances and 157 victories in her career.  The Long Beach, Calif., native is the only two-time All-American in UofL softball history, earning 2009 and 2010 Louisville Slugger/National Fastpitch Coaches Association All-America honors.  As the 2009 Big East Player of the Year, Roth hit a school-record .444, scored a UofL record 64 runs and produced a record .870 slugging percentage.  She owns the Cardinals’ career records for slugging percentage (.665), runs scored (204), doubles (68) and on-base percentage (.503).  She was the third overall pick in the National Professional Fastpitch Association senior draft in 2010.