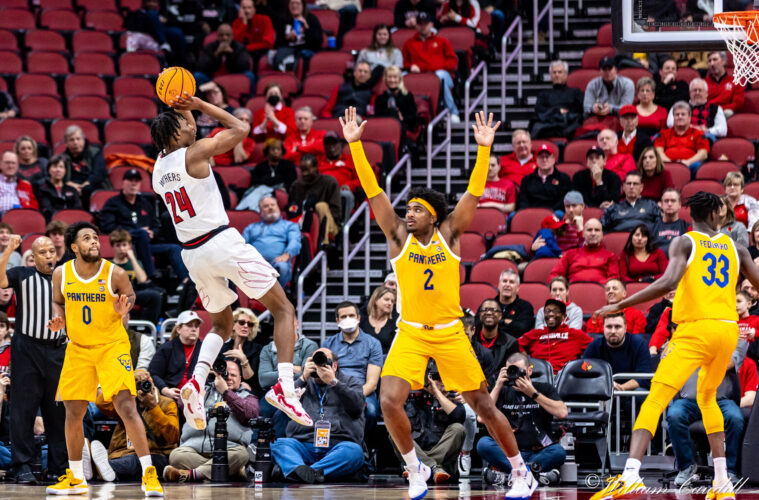 Louisville men’s basketball couldn’t withstand a barrage of 3-pointers from Pitt on Wednesday night, dropping a 75-54 contest at the KFC Yum! Center.

“I thought we were on our heels,” UofL head coach Kenny Payne said. “I feel bad for those guys because I am doing everything I can to explain to them just how hard winning is and how hard you have to play to win. What it requires and, for whatever reason, we get into spurts that they realize how hard it is and let go of the rope. That is not acceptable. But again, a lot of the credit goes to Pittsburgh because they have a mentality and have the experienced players. They have fighters. One kid made a shot and started talking trash to me. I like that. I like to see a guy play with confidence. Fans or critics may say I want them quiet and act like you’ve been there before.

“There is a battle going on and they are the aggressor. They were the predators, and we were the prey.”

“We just locked in on defense during (the beginning of the game),” junior forward JJ Traynor said. “We have to sustain that throughout the whole game. Tonight, we were playing good defense and then at the last second, we would give up the 3. We have to close out harder and know where the shooters are.”

Louisville had a late 8-2 run with 3s from redshirt freshman guard/forward Mike James and Traynor to help keep the halftime deficit to 37-28, and Traynor’s and-1 play with 17:04 to go made it a 39-33 ballgame.

The Panthers countered with a 3, a familiar theme as they answered every Cardinal punch and eventually stretched out the lead to 21.

Senior guard El Ellis had 19 points and five assists to lead Louisville, which outrebounded Pitt by one and won the points in the paint, 15-1.

Traynor tallied a career-high 14 points to go along with six rebounds, and Withers chipped in eight points and seven boards.

The Cardinals have a week off until they begin a road swing at Boston College at 9 p.m. ET next Wednesday. The game will air on ACC Network.