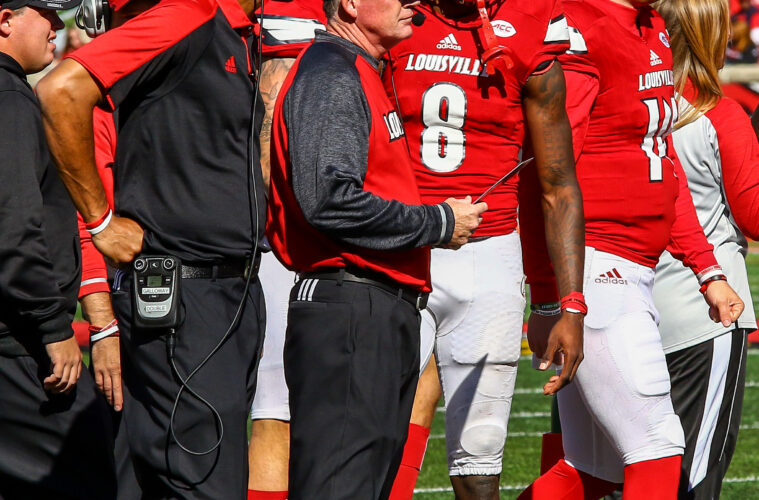 Lonnie Galloway, considered one of the nation’s top developer of wide receiver talent and measured  as one of the top recruiters, has been named co-offensive coordinator and wide receivers coach at the University of Louisville, head coach Bobby Petrino announced Monday.

Galloway joins the Cardinals from West Virginia, where he served as the associate head coach and wide receivers coach for three seasons.

Petrino also announced that Chris Klenakis, who was the offensive line coach since 2014, has been promoted to co-offensive coordinator and Nick Petrino will coach the quarterbacks.

“I am pleased to announce the hiring of Lonnie Galloway to our staff, and a well-deserved promotion for Coach Klenakis,” Petrino said. “Coach Galloway has been a part of programs with explosive, record-setting offenses and he has impressed me with his passion for the players he has coached. He’s a proven recruiter who has established relationships in key areas that will be an advantage for our program. Coach Klenakis has consistently brought a great energy to our program. He has been extremely dedicated and he did a tremendous job with our young offensive line last season. The perspective of both coaches blend well and we will continue our philosophy of being aggressive and attacking defenses in a number of ways.”

“It‘s an honor and privilege to be promoted to co-coordinator at the University of Louisville,” Klenakis said. “I’m appreciative that Coach Petrino believes in my abilities as a coach, and spending seven years on his staff, I’m grateful for what he has meant to my career. I look forward to working with the offensive staff in helping our offense continue to work toward our program’s increasing goals.”

Klenakis, who has been with Petrino for six seasons, begins his third season on Petrino’s staff at Louisville — helping the offense rush for 171.0 yards per game and 23 touchdowns in 2015.

Playing with three freshmen on the offensive line last season, Klenakis’ young group improved as the season went along, rushing for over 200 yards in seven games, including over 300 yards in wins over Kentucky and Texas A&M to close the season.

Klenakis served for Petrino as the offensive line coach for three seasons (2010-12) at Arkansas. The Razorbacks flourished with Klenakis directing the offensive line, allowing the third-fewest sacks in the SEC in 2012 and the pass offense was also third. Travis Swanson was named as an all-conference offensive lineman.

Klenakis’ offensive line had replaced three starters from 2010 and featured two players who made their first starts of their collegiate career in 2011 to block for an offense that set or tied 16 school records. Arkansas led the SEC in passing offense (300.7), total offense (438.1), and scoring offense (36.8) to become just the fifth different school to lead the conference in all three categories in a single season. The Razorbacks topped the conference in passing offense for the third-straight season and became the second SEC team since 1992 to lead the conference in that category for at least three straight seasons.

“I am very excited to have the opportunity to join the staff at the University of Louisville,” Galloway said. “My family and I are thrilled about what the city of Louisville and this program have to offer. This is a great opportunity for me at this point in my career and I am eager to start contributing to this program and achieving the goals that they have set for themselves. I look forward to learning under Coach Petrino, one of the great offensive minds in the country. I would like to thank Coach Petrino and Tom Jurich for giving me this opportunity. I am ready to get to Louisville to start spring ball and begin building relationships with these players.”

Spending two different stints at West Virginia (2008-10, 2013-15), Galloway enjoyed tremendous success in guiding the wide receivers at West Virginia. Galloway was instrumental in developing an explosive Mountaineer offensive attack. In 2015, West Virginia was ranked 23rd nationally in total offense with 479.7 yards of offense – 251.0 yards through the air and 228.7 yards on the ground.

Galloway, who had four wide receivers drafted since 2012, tutored 2014 NFL draft picks Kevin White and Mario Alford. White was one of the nation’s top players in 2014, when he helped lead the ninth-ranked WVU passing offense in the country and the 12th-ranked offense nationally. Following the season, White was named to 16 different All-America teams and was the No. 7 pick by the Chicago Bears.

Alford, an All-American and a seventh-round draft selection of the Cincinnati Bengals, was No. 9 in the Big 12 in receptions per game and receiving yards per game and was No. 1 in receiving touchdowns.

In his first go-around at WVU, Galloway helped the Mountaineers to three bowl appearances, including a win over North Carolina in the 2008 Meineke Car Care Bowl. Three of WVU’s touchdowns versus the Tar Heels came via the pass in a 31-30 win. The Mountaineers were co-BIG EAST champions in 2010 and also reached the 2010 Konica Minolta Gator Bowl.

Considered one of the nation’s top recruiters, Galloway was named the 2010 BIG EAST Recruiter of the Year by ESPN.com. While at West Virginia, Galloway, who recruited South Carolina, Georgia and Florida, recruited a pair of first round selections — Los Angeles Rams’ wide receiver Tavon Austin and Seattle Seahawks’ defensive end Bruce Irvin.

In his first season with the Demon Deacons in 2011, Galloway’s wideouts were on the receiving end of a school-record 3,291 passing yards. Chris Givens was named first team All-ACC after leading the conference in receiving yards per game (102.3). Givens also set the school record for receiving yards in a season with 1,330 on 83 catches and caught nine touchdowns. He was picked by St. Louis – now Los Angeles – in the fourth round of the 2012 NFL Draft.

Galloway coached for three seasons at Appalachian State, where he oversaw the split ends from 2005-07. He helped the Mountaineers to three Football Championship Subdivision national titles and coached three receivers who earned All-America honors.

From 2003-04, Galloway was the wide receivers coach at East Carolina, where he tutored Terrence Copper, who earned All-Conference USA honors while setting school records for receptions and receiving yards in a season.

A 1994 graduate of Western Carolina, Galloway was a four-year letterman who threw for 5,545 yards, the second-highest total in school history. He was a first team All-Southern Conference selection in 1993 when he led the Southern Conference in total offense with 231.9 yards per game.

Galloway finished second in the nation in passing efficiency as a junior in 1992 with a 167.4 rating. He earned three SoCon Offensive Player of the Week awards and produced a 322-yard passing game against Georgia Southern in 1993. Galloway finished his career with 6,832 career total offense yards, while completing 355 of 639 career passes for 5,545 yards and 30 touchdowns.

After spending the 1995 season with the Charlotte Rage of the Arena Football League, Galloway started his coaching career in 1996 at Elon, where he served as the quarterbacks and wide receivers coach through 2002. During his time with the Phoenix, Galloway coached Aretka Banks, a two-time all-conference player.

Galloway and his wife Winslow are the parents of three children: Anna, Hayes and Griffith. The Eden, N.C. native was born March 11, 1971.