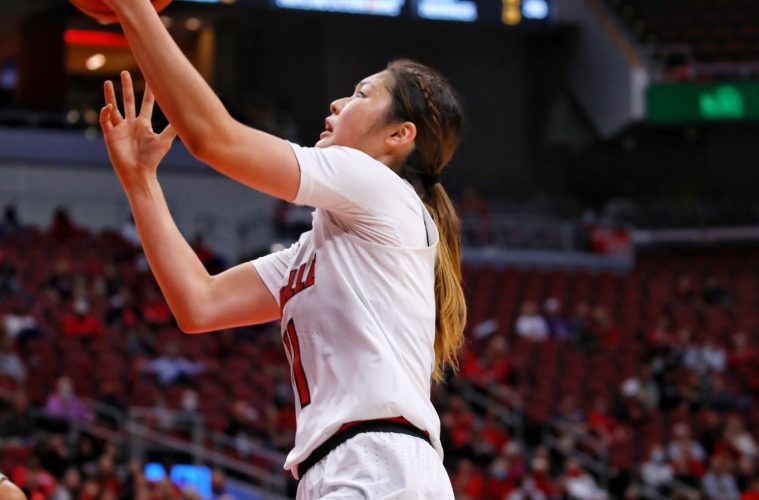 The No. 10 Cardinals steam rolled Bellarmine tonight recording an 82-25 victory in their home opener.

Going into this game I had questions. Did this team work on the things they lacked during the Arizona game? Did this team find their flow over the last few days? This is a Jeff Walz team, of course they did. That doesn’t mean the first possession or two didn’t have me a little worried. Turns out I just needed to shut up and calm down because it took very little time for them to settle in and get to work.

The first half showed us that having someone like Emily Engstler on this team is going to take us far. She came out with the motivation this team was lacking last Friday night. Recording a double double in the first half with 12 points and 10 rebounds, she was also leading the way in blocks and steals with 3 apiece. While the offense was firing, they were still showing some play that needs to be worked out before we move onto more challenging opponents. They were still making questionable passes and had 6 team turnovers in the first half. Something I’m sure Coach Walz let them know about in the locker room. The defense really did their job, holding Bellarmine to just 14 points in the first half and recording 13 defensive rebounds. Six of those came from Engstler. The Cards also managed to force 16 turnovers for 16 points.

Going into the second half Louisville didn’t slow down at all and by the fourth quarter every Cardinal had stepped foot on the court. Norika Konno had significant minutes off the bench totaling 11 points and coming up with big plays. I’d be remiss to not mention Peyton Verhulst when talking about bench players. She made her presence known today by putting herself in the middle of anything and everything. She would finish the night with 7 points, 5 rebounds, and 4 assists. The offense continued to show improvement with better passing in the second half and plays designed to get the ball to the right person. Oftentimes Ahlana Smith was this person as she kept finding herself in the right place at the right time. From fast break plays to a wide open three-pointer in the fourth quarter, she earned every bit of her 10 points tonight. However, the Cards did end up with 20 turnovers and Coach Walz said they just got sloppy. This is one area he says they really need to clean it up. It didn’t cost them tonight, but it did against Arizona and will be an issue if this continues against better opponents down the road.

The Cards finished the night with 4 players in double digit scoring, led by Engstler with 12 points. She also led the team in rebounds (14), and steals (4). Hailey Van Lith had 11 points and landed right in my lap at one time. Luckily neither of us suffered any injuries.

My biggest take away from tonight is that this team needs to find a way to improve their three-point shooting. Going 5-21 isn’t going to cut it once we get into ACC play. This team has the talent to be good behind the line and they’re getting good looks. When asked about the three-point shooting, Coach Walz said at one point he had to tell them to stop shooting threes. He added the only way they can improve is through practice.

Coach Walz stated in the press conference that he was really impressed with how Emily Engstler played tonight, saying she went out there and did what she knows how to do. He followed up by saying he’s not sure they’ve ever had a player get a double double in the first half before.

On Norika Konno, Walz says she’s been playing phenomenally, and she really understands concepts. He also added that she’s more confident in her shooting now and she has been a joy to coach.

On Ahlana Smith he says he will challenge her to do more defensively. He says he knows she has more in the tank than what she’s giving us even though she’s playing well.

On her double double, Emily Engstler says she was aware of it at halftime, and she hopes it starts to feel normal. She’s always been a rebounder, so she wants to be consistent in that. When asked what they take out of a win like tonight’s she said they play a game like this to reconnect the team after a loss like they had against Arizona.

The Cards will host UT Martin tomorrow (November 17th) at 7p.m. EST before heading to Washington on November 20th.