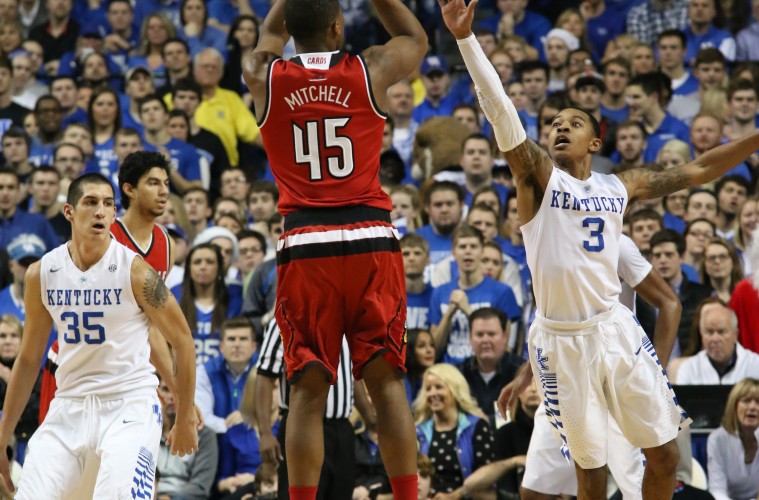 My Take: Battle of the Bluegrass

My Take:  Battle of the Bluegrass

This team is mentally tough. Michigan State was a good indicator the Cards can handle a rowdy road environment and hold court.  The game in Lexington re-affirms.  Down 16 points, crowd going berserk, the Cards rallied back and had two opportunities to tie or win.  We are used to Rick’s teams making comebacks – but it is not guaranteed.  We have a lot of fresh faces in a new system.  Guess what?  This team can.  Great to know especially when we hit neutral courts in the NCAA.

The team is still getting in sync. With the amount of first year players in Pitino’s system – I expect us to have some ugly moments.  This team has impressed us with early season success in that bucket.  This is only going to get better.  Late game execution will be a focus for sure.  However, in the end – you had two final possessions to tie or win.  One was in Lewis hands, one was in Lee’s.  They both can shoot it and are good free throw shooters.  This is better than giving Mangok a free throw line jumper – although that Virginia game will have you thinking otherwise.  My one complaint is I don’t think Lee streaking to a corner to shoot across his body was a high percentage option even if he was better balanced, but I am not a coach.  I am a dummy.

UK made 11 threes. How?  I don’t know.  Who?  Even more bizarre, as Hawkins goes ham only to likely disappear for the rest of the season.  When that happens at Rupp you should lose by a lot more than 2 points.  See point #1 above.  It just sucks, they won’t do that again this year and we have another frustrating loss to deal with.

Nanu’s 2 fouls. Kentucky got awfully comfortable in the first half with him out.  Factor in Mangok out with a broken foot – that puts the Cards down 2 of their toughest inside enforcers.  Nanu was able to avoid the fouls in the second half and the Cards were able to re-establish themselves inside after an early Kentucky surge.  The Cards will have both at the end of the season.  That helps, because if Nanu is out with 2 fouls – Mangok maintains the defensive toughness inside.  The other bigs will get there in time.  It’s all part of the development.

Rebounding: The Cards killed Kentucky on the boards.  This historically is hard to do.  This will only get better when Mangok returns.

Mitchell:  This man is not afraid of competition.  He looked good in the few minutes he got against Michigan State.  He looked “gooder longer” getting even more minutes against Kentucky.  He still reminds me of Eric Johnson from the 90’s.  Mitchell has a higher ceiling and better handles, but the wow factor is on par.  I was also happy to see the recovering Adel smoothly knock down a jumper.  Looking forward to getting him back in the mix more.

Matz out produced Skal. I just had to write this one out because it would have been an amazing preseason bet in Vegas.  Neither were a big factor.  Side note.  I LOVE that Matz feverishly goes for dunks.  I wish all the big men had fangs.  Poythress had a manly block, it happens.

Lee missed a free throw.  Anyone else think “My god, he never misses”.  He was 9/10 on the day, which means he actually shot better than his percentage (high 80’s).  I have to remind my self that I am willing to accept 90% shooting. Ha.

The replacements: To me this was the difference in the game.  Briscoe was hurt but Hawkins more than covered for his production.  Mangok was hurt and Ray had a tough one out there.  He will get there – Hawkins has experience in this game and was playing comfortably on the home court.  A terrible shooter getting 3 of 4 three pointers though?  Come on, man.

Graduate transfers: Lee and Lewis combined for 42 points.  Big environment.  Big Stage.  National exposure to the highest level in college basketball.  It would be a disservice to kids like Lee and Lewis if they ever shut this option down.  Without it, you have some great kids out there getting zero exposure.  If they graduate and have an opportunity to either play for a team that will make the NCAA, or get on a draft board – which Lee now has – that helps. It’s a good thing.

Going Forward: Plenty of opportunities lie ahead. The ACC might set a personal conference record for bids this year.  Many opportunities to get better and hardened for the NCAA.  Cards have lost two close ones on the road – eventually we will be playing these ranked teams at YUM! and then we get to be the 6th man.

I am bummed like anyone else to lose to Kentucky…again.  However, I try to look at this game on its own.  Rebounded well, we scored well, fought back in probably the toughest road environments there is.  This team can play basketball.  These kids are fun.  They will get better each week….and there are many more weeks ahead to do so.  Go Cards.