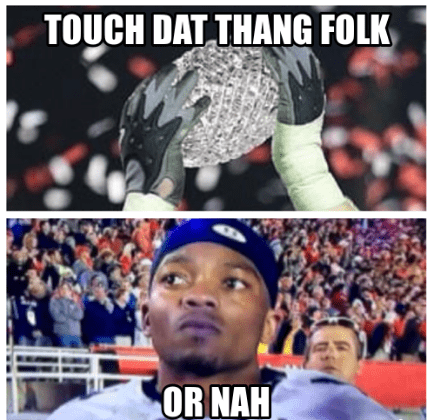 Money, coaches, and the trail; the formula for a breakthrough

If you listen to Louisville talk-radio on your work commute you’ve probably heard the shopworn sentiment that, “Louisville needs to beat Clemson and/or FSU to breakthrough as national contenders.” It’s a tiresome, shortsighted angle that has turned into a rut for the discerning listener. With the 2016 Louisville defense returning a bevy of defensive leaders that opted for another year of college ball over the NFL draft and the seeming limitless potential of Lamar Jackson behind center, it seems the focus of the fanbase is on them “breaking through” and unseating Clemson and FSU from their thrones atop the ACC this season.

Even if the ‘Cards can win the ACC, a stretch as far as I’m concerned, FSU and Clemson will be right there again next season.  Those programs didn’t become two of the hottest squads in the country overnight.  Make no mistake about it Jack, both of those schools are built to contend well into the year 2020, but are the ‘Cards?  NC State defeated FSU in 2012 as did Georgia Tech in 2015.  Beating FSU, or Clemson for that matter, does not mean your boys have “broken through,” it means they pulled off an upset.  In order to become a serious contender in any conference, the up and coming program must pose a threat to the blue bloods on a consistent basis.

Consistency starts on the recruiting trail and manifests on the field.  One does not simply, “beat FSU and Clemson” and then “breakthrough” by trotting out recruiting classes with a four year average of 38th nationally, against FSU (5th) and Clemson (13th) this year.  That 5th ranked class and 13th ranked class will be there next year, the year after, and the year after that.

Recruiting is an arms race and he who wields the Excalibur sits upon the throne, or at least a spot at the round table.  Turning a program from an 8-5 “middle-of-the-road team” to a title contender is a process that starts on the recruiting trail, continues through the training facilities, and ends in the hands of elite coaches deploying elite talent on the field. Even if you are contending that “breakthrough” simply means competing for ACC Championships, Louisville has to do better in several areas, mainly recruiting.

I saw Howie Lindsey tweet something a few weeks ago about 32 players from the 2012 Louisville squad “who have a shot at an NFL camp.”  Not to take away from those guys and their hard work, but this is the type of talent you need on your roster to “break through” and become a perineal power in college football: 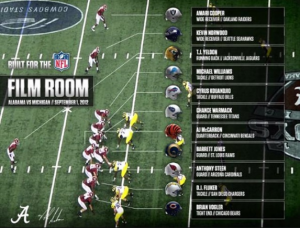 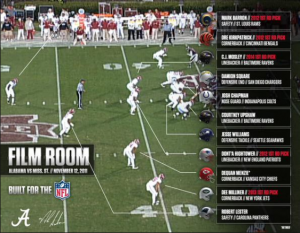 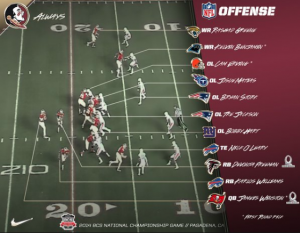 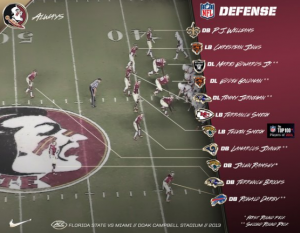 From 2012 through 2015, Alabama held the consensus number one recruiting ranking every season. They wear two rings from that four year period. Ohio State’s four year average during that span was fourth, and FSU came in at number five. Recruiting rankings are a strong indicator of on-filed success, but strong recruiting alone isn’t enough.

Getting blue chips on campus is only a third of the battle. High school physiques and skill sets have to be molded to meet the rigors of the college game. All three of the last championship programs have football facilities ranked in the national top 15 according to 24/7sports (Bama #3, OSU #6, and FSU #14) and all three programs cracked Forbes top 20 richest football teams (OSU #7 at $100M, Alabama #8 at $99M, FSU #17 at $70M) in December of 2015. Facilities promote strong training regimes and attract the best strength and conditioning personnel money can buy.

Finally, you can field a Lamborghini roster but, if you put the wrong driver at the wheel you’re just gonna end up driving it to the Idaho Potato Bowl.  The coaches of the last three championship teams are Nick Saban (100-18 at Alabama), Urban Meyer (50-4 at OSU), and Jimbo Fisher (68-14) at FSU.  All are elite coaches who trained elite talent in top notch facilities to national championships for millions of dollars in re-up money.

Louisville has good (not great) facilities, but with the new stadium expansion and the wads of cash Tom Jurich has reaped for the school, it is not hard to envision the UL football facilities being laced with state-of-the-art upgrades.  Many on the national scene believe Louisville Head Coach Bobby Petrino to be one of the best in the business.  I agree based upon his 58-18 record at Louisville. While HCBP’s numbers don’t stack up to the coaches that inherited legendary programs, namely Saban, Meyer, or Fisher, Petrino’s path is more fairly comparable to Clemson’s Dabo Swinney. Clemson was once a middle of the road program that has become a powerhouse lately and Swinney’s 75-27 record is one that Petrino can best in his 102nd game at Louisville.

On paper, it appears Louisville lacks the depth to go four quarters with teams including and outside of ACC big dogs FSU and Clemson.  Schools like Alabama, Ohio State, Oklahoma, Michigan, Georgia, and LSU have offensive line size and depth made to wear down first team defenses with power running attacks. They also have the defensive line personnel that allows them to rotate the big guys up front keeping them fresh.  As exciting as it is to have a QB like Lamar Jackson, football is won in the trenches, as cliche as that sounds, it’s a tried and true fact of life.

While the focus of the fan base is on knocking off FSU and Clemson, which is understandable considering they haven’t done so yet, splitting those games then running the rest of the regular season schedule is all that is truly required for a break out season.  Surely those with their mortgages on the line have their sights set on becoming a national player year-in-and-year-out.  But in order to turn your program into a powerhouse, you have to capitalize by turning your break through campaign into momentum on the recruiting trail.  The coaching staff is in place and the money is there for Louisville, but if they are to establish a consistent spot among the elite, they have to start poaching players from the top of the recruiting boards of coaches like Urban Meyers, Nick Saban, and Jimbo Fisher.