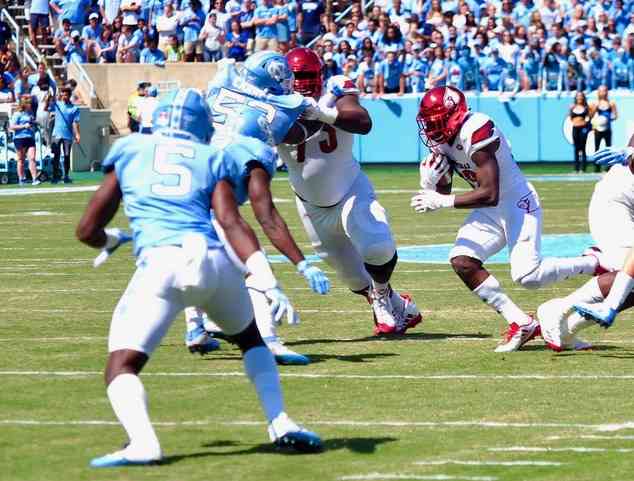 Mekhi Becton Ready to Take Next Step in His Second Season

Initially looking at Mekhi Becton last year, it was tough to fathom that the mammoth offensive lineman didn’t boast an ounce of collegiate experience.

The Highland Springs, Va., native towered over the opposition as a 6-foot-7, 345-pound rookie. Based on his physique, most pegged him as a veteran – not an 18-year old freshman.

Heading into this season, Bechton is one of the more experienced starters returning on the offensive line after starting nine games a year ago.

As a true freshman last season, Becton anchored an offense that was one of the best in the nation, finishing third in total offense at 544.9 yards per game and 38.1 points per contest.

Now a year under his belt, offensive line coach Mike Summers alluded to at Media Day that if Becton got his hands on a defender, his strength easily gave him the upper hand.

“I’ve been working on my strength and technique all season,” Becton said. “Last year was just a stepping stone, so this year is big for me in my development. I’ve worked hard to get even stronger, but also get better with a lot of the things the coaches have been working with me.”

While the 2017 offensive season was a success, Becton knows that to accomplish bigger goals, the offensive line must continue its development and build off its success from a year ago.

While most of the starters back along the offensive front, the Cardinals will likely have a new leader at center in sophomore Cole Bentley, another 300-pounder in the trenches. A starter in three games last year, Becton has all the confidence in the world in Bentley’s ability.

“Cole has been doing really well,” Becton said. “He’s been speaking … he’s been quick on his calls and getting everyone in the right position.”

While a lot of the focus has always been on the offense during head coach Bobby Petrino’s tenure, Becton has high praise for the other side of the ball, who he’s battling every day in practice.

“The defensive line is going to be really good,” Becton said. “I think Jon Greenard is playing with a chip on his shoulder this year. They are all coming at us hard and not slowing up at all. We have great competition at every practice.”

The Cardinals will get another opportunity at competition when the team returns to practice on Thursday at 9 a.m.