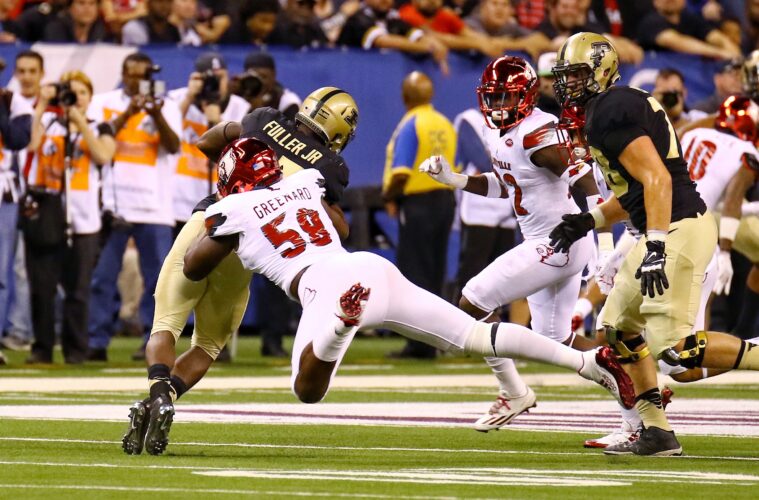 The University of Louisville football team used the first two weeks of training camp to learn a new defensive scheme and break in a number of new faces.

With only five returning starters returning, there were plenty of concerns about the youth and depth on that side of the ball.

However, with the season opener just 10 days away versus Alabama, the Cardinals are more comfortable on defense, and are closing in on its rotation, especially at the linebacker position, where a number of new faces will be counted on to build depth.

While the defense is adapting to a number of new bodies, linebacker Dorian Etheridge is subsequently the veteran despite being just sa ophomore. A starter in all 13 games last year,

Etheridge became the school’s first true freshman to lead the team in tackles with 83, but is still only in his second year.

“He’s done a really good job,” Beard said of Etheridge. “He’s developing more as a leader and has taken ownership in the entire defense. Last season he was worried about getting himself lined and focused more on his alignments, but now he’s taken more control of the whole system.”

In Brian VanGorder, the team’s new defensive coordinator, a lot of responsibility has been put on the 6-foot-3 linebacker from Charleston, West Virginia, and the freshman All-American has responded.

“There is some pressure that comes with that as the Mike linebacker,” Beard said. “You have to have broad shoulders to handle some of that pressure. However, he’s come in and has been prepared, and when you are knowledgeable, you can play more free.”

Linebackers C.J. Avery and P.J. Blue, a pair of former safeties, have transitioned to the linebacker position, and will be counted on immediately to stop Alabama’s vaunted running attack, which averaged 250.6 yards last season.

“They are extremely important to our defense,” linebackers coach Ryan Beard said of Avery and Blue. “They bring a lot of depth to the room. That’s the best part about it. We feel like we can play multiple guys at a number of different positions and still be productive.”

Avery, who hails from Grenada, Mississippi, appeared in all 13 games at safety last season, and made the adjustment to the linebacker position in the spring, and looks to make his first start at that postion on Sept. 1.

“I like it there,” Avery said of his position switch. “Coach VanGorder told me last spring that I’d be making the switch and I have accepted that role. I feel like I’m growing as a player and I’m getting better day-by-day.”

Hampered by injuries in his first two seasons, Blue is excited to make the switch to linebacker, but is really looking forward too finally getting on the field. The Jemison, Alabama, native redshirted his first year and tore his ACL in 2017, which has hampered his progress.

Blue and the rest of the Cardinals will get that opportunity on Sept. 1 when they face Alabama, the defending national champions, in Orlando, Fla.