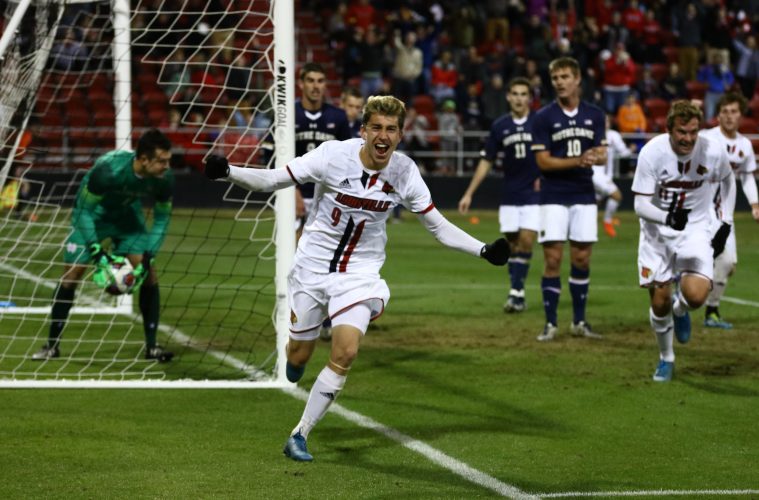 Louisville vs The Cardinal; Battle for the College Cup

The Cards are good.. They’ve played insanely well this season. Overall, 14-5-2.. Conference record, 5-2-1.. They were 10-2-1 at home. The ACC is strong. 5 of the elite 8 teams are members of the ACC conference. Of the 4 teams other than Louisville, the Cards faced two, Clemson and Wake Forest. They lost to both teams for 3 losses on the season.  Louisville’s other 2 losses were to rivals Indiana at home and Kentucky on the road.

The Cardinals, playing in the Elite Eight round of the NCAA Championship for the first time since making three straight appearances from 2010-12, will host No. 5 Stanford on Saturday at 7 p.m., ET at Lynn Stadium with the winner advancing to the 2016 NCAA Men’s College Cup in Houston, Texas.

Tickets for Saturday’s NCAA quarterfinal match against the Cardinal, the reigning NCAA champion who advanced with a 1-0 double overtime win against No. 12 Virginia, are priced at $10 for reserved chairback seats and $5 for general admission/berm seating and can be purchased online here, by phone at 502-GO-CARDS or in person through the Louisville Cardinals Ticket Office at Papa John’s Cardinal Stadium.

The Louisville men’s soccer team need a complete #Cardnation at Lynn Stadium on Satruday night. Should the Cards make it to Htown, there is not much of a home advantage opportunity for any team in the remaining tournament field, maybe Denver. The Cards were 4-3-1 on the road with a win over (14 at the time) Uconn, losses to (at the time 16) Kentucky & twice at (at the time 7 & 2 respectively) Wake Forest.  Should the Cards meet with Wake Forest for a third time this season, it would have to be in the final match.. And I’d put my money that the Cards would not fall to the demon Deacons for a third time this season.

How they became elite

LOUISVILLE, Ky. – For the second consecutive week, sophomores Danny Reynolds and Tate Schmitt combined for the decisive goal as the No. 4 University of Louisville men’s soccer team clinched its fourth NCAA Championship quarterfinal berth in the last seven seasons with a 3-1 victory over No. 13 Notre Dame in Sunday night’s third round match at Dr. Mark and Cindy Lynn Stadium.

With the score even at 1-1 in the 71st minute, Reynolds delivered a corner kick to the top of the six-yard box where Schmitt connected on a header scoring inside the left post to push the Cardinals (14-5-2) ahead for good. In last Sunday’s second round win over UCLA, Schmitt was on the receiving end of a cross from Reynolds before scoring on a header to lift Louisville to the overtime triumph. Along with Schmitt’s decisive goal, junior Mohamed Thiaw connected for a first half goal and freshman Cherif Dieye added a goal in the final 10 seconds of the match for the home side.

Who to watch for

Stanford’s Foster Langsdorf headed home a free kick from Adam Mosharrafa with under five minutes left in the second overtime to lift the Cardinal over the Cavaliers in the Sweet 16 round of the NCAA men’s soccer tournament on Sunday evening.

After regulation time and the first 10-minute overtime period failed to produce a goal, Mosharrafa took a free kick from near midfield that found the head of Langsdorf, who managed to direct it past Virginia (11-4-5) goalie Jeff Caldwell. Langsdorf’s goal is his 14th of the season.

Andrew Epstein made four saves for Stanford (13-3-4) vs Virginia. The shutout is Stanford’s fourth consecutive shutout in a postseason game. The Cardinal have not allowed a postseason goal in more than 400 minutes.