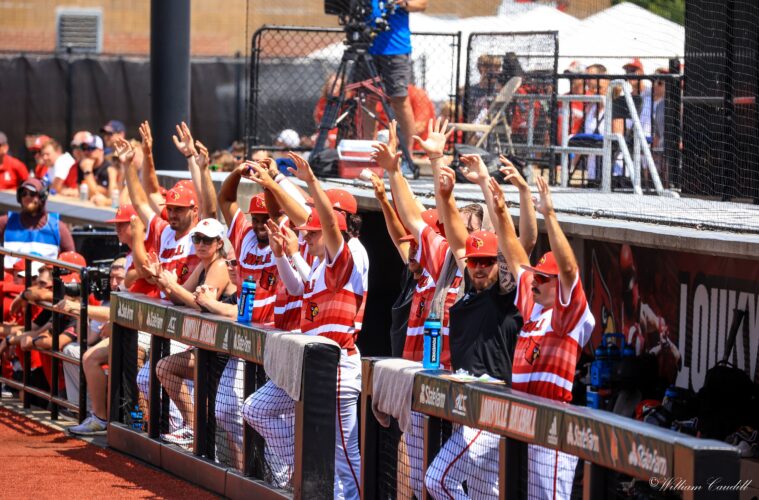 The University of Louisville baseball team turned in an 8-5 victory over Oregon and then a 20-1 win against Michigan to stay alive in the NCAA Louisville Regional at Jim Patterson Stadium on Sunday.

Louisville (41-19-1) has forced a winner-take-all game against Michigan on Monday with a spot in the super regional round on the line.

The Cardinals entered the day needing a pair of victories to keep their season alive, beginning with a win over Oregon.

Oregon (36-25) plated a run in the top of the first, but Jack Payton tied the game up in the bottom of the frame with a run-scoring groundout.

Carson Liggett followed with three scoreless frames and Cameron Masterman gave the Cards their first lead of the day in the fourth, sending a 0-1 pitch to the berm in left-center for a two-run shot.

The Ducks got one of the runs back in the fifth, but Michael Prosecky entered and kept Louisville in front by a run.

Louisville stretched the lead out with three runs in the sixth, getting its first tally with a balk and then run-scoring knocks from Logan Beard and Ben Bianco. In the seventh, Dalton Rushing launched a long homer just right of the scoreboard in right-centerfield.

Three runs in the eighth got the Ducks back within two, but Christian Knapczyk singled home Levi Usher to add an insurance run.

Tate Kuehner handled the final five outs of the ballgame to secure his fourth save of the season. Liggett (3-0) allowed just two runs over four innings for his third win.

Louisville’s offense got rolling early and often in the nightcap against Michigan.

Usher and Logan Beard each tallied two-run singles in the top of the first inning to stake the Cards to a 4-0 lead before Riley Phillips stepped on the mound.

The southpaw responded with three consecutive strikeouts in the bottom half, kicking off what would be a career night.

Ben Metzinger kept the offense rolling in the second with a two-run homer to straightaway centerfield and Masterman wrapped a double into the left field corner to make it 7-0 through two innings.

Michigan (34-27) grabbed its only run of the night with a solo homer in the third, but Phillips dominated the rest of the way.

Phillips (5-1) allowed just the one run on two hits over five innings of work, setting a career-high with 11 strikeouts. The 11 Ks tied the Louisville program record for strikeouts in a NCAA Regional game, matching Reid Detmers’ output against Illinois State in 2019.

Masterman tallied his second homer of the day and third of the regional in the fourth to make it 9-1 before the Cardinals pushed across three more in the fifth. Metzinger, Rushing and Payton had consecutive RBI hits to make it a dozen runs on the board.

Evan Webster handled the final four innings for the Cards, allowing just one hit to secure the first save of his career.

Louisville tacked on six more runs in the eighth, which included a two-run double off the bat of Austin Bode. Metzinger then capped the night with his second two-run homer of the game to help the Cards match their highest run total in postseason history. The 20 runs matched Louisville’s total in the third game of the 2007 Super Regional against Oklahoma State.

Thirteen different Cardinals recorded at least one hit between the two games on Sunday. Metzinger and Masterman each homered twice and drove in five to lead the way.