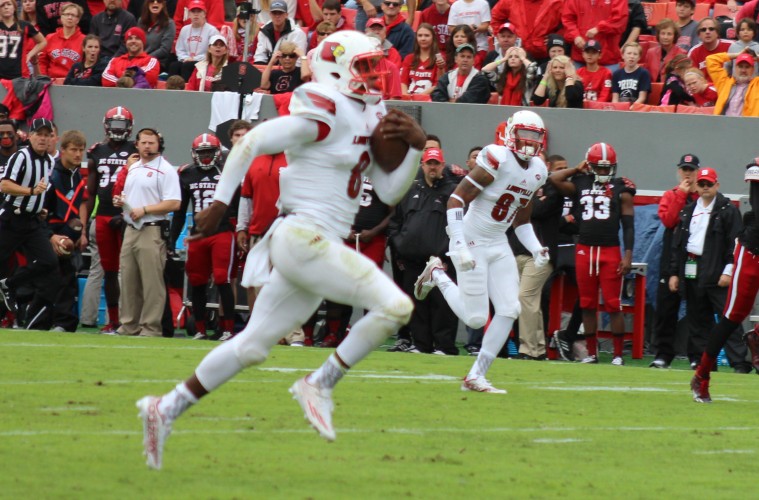 Louisville’s Offense is still searching for its identity.  That’s what happens when 6-8 freshman are on the field at a given time on a regular basis.  But the Cards have been more consistent, made fewer errors and have found some answers during its first 5 games of the season.  UofL’s found its Quarterback in Lamar Jackson, they’ve found both Tackles in Geron Christian and Kenny Thomas, they’ve found a tight end in Micky Crum (all freshman)…and they’ve gotten veteran players James Quick and Jamari Staples back from injury.  Progress…..but no where near being a finished product.

So far, the coaching staff has avoided putting Lamar Jackson under center and in short yardage has used Reggie Bonnafon.  This has greatly reduced Louisville’s offense.  The Cards can’t run play-action or implement a power running game…..which compromises Brandon Radcliff’s strength.  The lack of a running option outside of Jackson is a problem for the Cards, who have talented backs, so they need to find a way to get Lamar under center at some point.  Until then Louisville will be a shotgun team that relies on read option and challenges defenses to contain.  The task for Lamar is to do a much better job in the passing game to keep defenses guessing…and for receivers to catch the ball (too many drops vs. NC State).

Florida State is FAST and much improved defensively from a year ago in year 2 of Defensive Coordinator Charles Kelley’s leadership. Middle Linebackers Reggie Northrup and Ro’Derrick Hoskins lead FSU in tackles from the same position….and that should tell you something.  The guys upfront for the Noles are getting it done.  Derrick Nnadi, DeMarcus Walker,  and Nile Lawrence-Stample (among others) are causing all kinds of problems for opponents.  It’s equally as difficult to run as it is to pass against the Seminoles and as a result it’s really going to be difficult to sustain drives against FSU as the Cards convert just 41.10% on the year and face FSU who allows just 32.89%.  The Seminoles are equally as tough inside the RedZone allowing TDs just 41.67% of the time while the Cards score TDs just 58.33% in scoring territory.

And it gets worse……in addition to everything mentioned above.  Florida State is Top 15 in allowing long plays from scrimmage.  So teams sustain drives AND can’t break off huge chunk plays.

That’s a problem and it is directly related to Florida State’s speed.  Louisville’s offense has been plagued with a lack of consistency, but the group has been able to put together some really big plays to allow the Cards to put up points.  Against Florida State Louisville has to find a way to play its best football of the season and eliminate drops, penalties, mis-reads/checks…..and the Cards must run the football and attempt to attack the Noles on the outside.

One thing that FSU doesn’t do an awesome job of is making tackles in the backfield…..but that’s also a weakness of Louisville’s (allowing TFLs & Sacks).  In the end the Cards & Lamar Jackson will have to play the best game of the season to win in Tallahassee.  If UofL can keep it close in the 4th  quarter there is something to say about a play-maker like Lamar that defenses have to chase for 60 minutes…..the longer the game goes the worse the pursuit becomes.  It’s a lot to ask a true freshman QB like Lamar to go into Florida State on the road with 3 freshman offensive lineman and win.  It was a lot last year asking Reggie Bonnafon to go on the road against Notre Dame…but somehow the Cards got it done.

Either Louisville will sustain drives or they will get the big play here and there to get points…….or they won’t.  If they can’t do either, it’ll be a long day in Doak Campbell Stadium.  We will see how the Louisville offense has evolved in a week off.