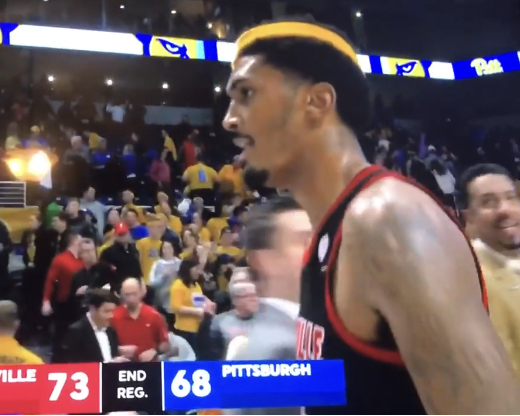 Louisville traveled to Pittsburgh and came away with 73-68 (OT) win over the Panthers in the zoo. The game was a rowdy affair on the floor and amongst the 9221 in attendance. Early in the game a Pitt student was tossed from the crowd following an early warning to the crowd. Chris Mack earned a technical and double technicals were issued to Louisville’s Malik Williams & Pittsburgh Au’Diese Toney.

Pitt led for 33:20 of the game and the Cards did trail in regulation until David Johnson finally knotted the game at 61-61 with 0:48 to go. The Cards missed the front end of two 1&1’s (Williamson & Sutton) in regulation and really had a tough time stopping Trey McGowens (24 points). But UofL found a way to win despite being out-rebounded.

The officiating crew was puzzling. Well actually they weren’t good at all. Pitt suffered early from an unkind home whistle and the Cards certainly could gripe in moments. But the call that changed the game was a phantom over the back call on Pittsburgh after a tip in that would have tied the game in overtime actually gave the Cards FTs to extend to a 72-68 lead instead of being tied at 70.

Of note, Darius Perry didn’t see action after 15:23 remaining in the 2nd half. Instead Chris Mack opted to go with freshman David Johnson in the critical situations. The results with Johnson were mixed, but mostly positive as he routinely gave the Cards an offensive option in the paint from the guard position and was a bigger body defensively to deal with McGowens, Xavier Johnson & Justin Chamagnie. Fresh Kimble made a HUGE 3 with 1:31 left in regulation to pull the Cards within 1, assisted by David Johnson as well.

It was Malik Williams night in the post. The junior finished with 9 points and 8 rebounds but it was his defense in critical situations that proved vital. He forced a travel at the top of the key, he rebounded and his +1 layup (followed by a made FT) with 2:50 to go was critical to Louisville’s comeback. Williams in the post-game handshake line retrieved a Pitt headband that had been thrown from “The Zoo” and wore it while shaking the Panthers’ hands. Pitt assistant coach Jason Capel could be heard on the ACC Network telling Malik “Take that shit off your head.”

Bad calls, technical fouls, head bands, overtime and confrontations in the handshake line….. this game had it all.

Louisville moves to tie for 1st place in the ACC with Duke (and technically FSU) as the Blue Devils lost at Clemson tonight. The Cards will travel to Durham on Saturday to square off against Duke in Cameron Indoor. It’ll be a tough environment, but let’s face it….. it’s no Littlejohn Coliseum.