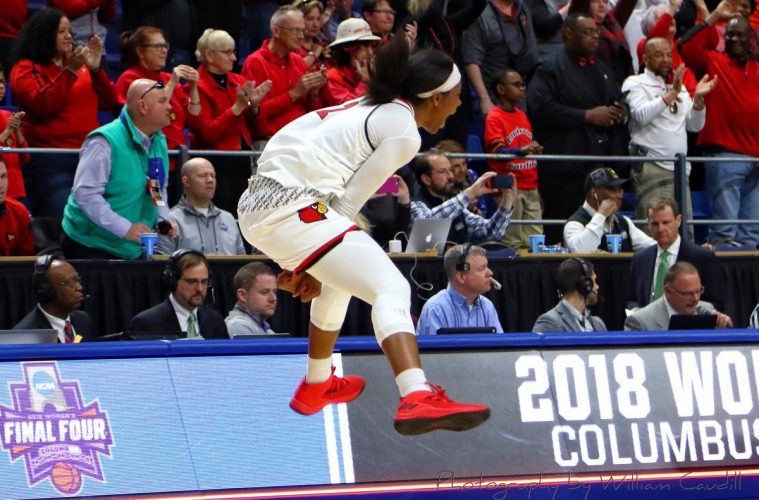 Louisville Headed to Final Four With Win Over Oregon State

Louisville players proudly strutted around the court in championship T-shirts and hats, some adorned with a little piece of the net.

Cardinals coach Jeff Walz brushed off confetti dumped on him during an interview to climb the ladder and clip the rest of the nylon, happily twirling it to celebrate his top-seeded team’s dominant run through the NCAA Tournament Lexington regional.

Louisville’s next quest is collecting another net and more confetti in next weekend’s women’s Final Four in Columbus, Ohio.

Asia Durr scored 18 points, Myisha Hines-Allen added 16 and Louisville earned its first Final Four berth since 2013 with a 76-43 rout of No. 6 seed Oregon State on Sunday in the Lexington Region final.

Playing its first regional final in four years and for the first time in school history as an NCAA No. 1 seed, the Cardinals (36-2) thoroughly ran the table while playing close to home. They never trailed in rolling to their 11th consecutive victory.

They outscored the Beavers 28-12 in the third quarter to break the game open and complete their four-game run through the regional by an average margin of victory of 27.5 points. Louisville controlled the paint 32-18 and scored 24 points off 17 turnovers against an Oregon State squad that succeeded with precise passing.

”If we were able to get stops and go in transition, we were going to be confident,” Hines-Allen said. ”Our shots were falling in the second half, and it all came down to defense. If we wanted to win, we had to stop them.”

Even more impressive for Louisville: the Cardinals committed just three turnovers to tie an NCAA Tournament record. This, despite playing a frenetic pace for much of the game. It worked in getting good shots that fell for the final three quarters.

Sam Fuehring had 14 points and Arica Carter 10 for Louisville, which shot 48 percent. Players celebrated on the court before its red-clad following that traveled just under 80 miles east and hung around to watch them cut down the nets.

The Beavers (26-8) struggled in their bid of adding Louisville to their remarkable run of NCAA upsets after previously ousting No. 3 seed Tennessee and No. 2 Baylor last week. Oregon State outrebounded Louisville 32-28 behind 6-foot-5 Marie Gulich (14 points, eight rebounds), but shot 35 percent in losing just their second game in the past 12.

”Hats off to Louisville, they played an outstanding game,” OSU coach Scott Rueck said. ”They were on point defensively, kept us off our spots early. Never let us get comfortable, forced us into turnovers.”

Oregon State: The Beavers initially succeeded in limiting Louisville’s scoring. But they couldn’t make baskets against a rotation of coverages on Gulich and tight defense on others, especially on the perimeter. Keeping pace with the Cardinals’ quickness was another struggle, especially during the pivotal third quarter in which Louisville took control.

Louisville: The Cardinals were a little too fast at the start and missed easy chances, but the shots they provided an early edge. Shooting 9 for 25 on 3s against Oregon State’s zone was huge in spreading things out, and they hit another gear in the third quarter to put it out of reach. Louisville reached the Final Four in 2009 and 2013 under Walz, losing the championship both times to UConn.

Durr, who totaled 42 points this weekend, was named the region’s Most Outstanding Player. Joining her on the all-region team were teammates Hines-Allen, Carter and Fuehring, and Oregon State’s Gulich.

Walz briefly became emotional as he let the victory sink in. Among those he thanked was former Louisville athletic director Tom Jurich, fired last fall in the wake of the school’s acknowledgement of its involvement in a federal corruption investigation of men’s college basketball.