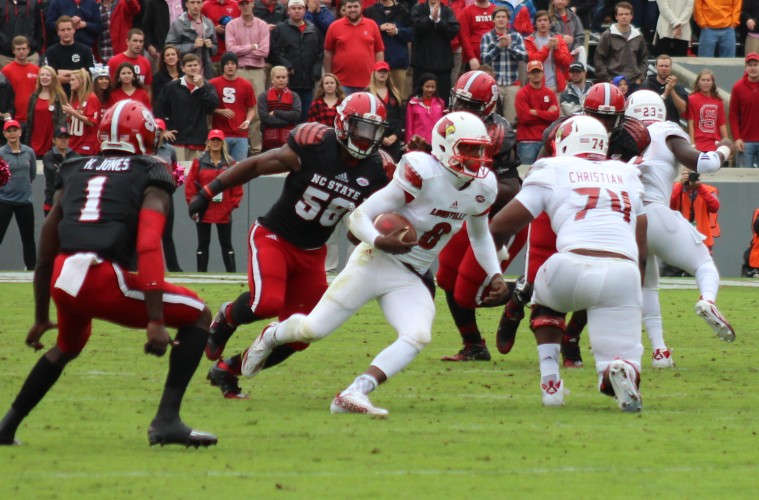 Coming off a pair of lopsided wins, the University of Louisville football team steps back into Atlantic Coast Conference play with a top-25 matchup Thursday night matchup against No. 24 NC State at Carter-Finley Stadium in Raleigh, N.C.

Improving to 4-1 overall with home victories over Kent State and Murray State, the competition will get stiffer against one of the nation’s top defensive lines.

Led by All-America candidate Bradley Chubb, who ranks second nationally in tackles for loss and ninth in sacks, the Wolfpack – winners of four straight – boast the eighth-ranked rushing defense heading into the nationally televised contest.

“They are a well-coached unit,” UofL co-offensive coordinator Lonnie Galloway said. “They have four seniors up front and three senior linebackers. They play hard. They are big, long, and athletic. They do a lot of things that are troublesome.

“Chubb is an outstanding defensive lineman. We have played them now for three years. They’re used to us, and we are used to them. It will come down to execution and taking care of the football.”

Reigning Heisman Trophy winning quarterback Lamar Jackson, who has thrown multiple touchdown passes in five-straight games, is excited about facing one of the nation’s top defensive teams on the road.

“They all run to the football and play really hard,” Jackson said of NC State’s defense. “Most of those guys are returning. They have a great defensive line and bring back a lot of the same guys. We just have to go out there and play football.”

The Cardinals, fresh off a Saturday victory, face a short turnaround, with two games in a five-day period. Hitting the practice field on Sunday night, the Cardinals have had two good days of practice to prepare for a tough league game in what will be a raucous environment.

“We have practiced with the crowd noise,” Galloway said. “You can go out and practice with noise, but you still have to go out and execute. They will have a great crowd, but a lot of our guys have played in a loud environment, except for some of the freshmen, but we have played in some tough stadiums.”

The defense has compiled consecutive solid performances, holding the last two opponents to a combined 230 yards of total offense.

“I felt like we gained our confidence back,” senior linebacker Stacy Thomas said. “We were able to play a lot of different players and everyone got used to being on the field. We feel if someone went down, then anyone can come in and step in.”

After two relatively two dominant games, the Cardinals will be challenged by one of the most accurate passers in the country in Ryan Finley, who is completing 71.9 percent of his throws and hasn’t tossed an interception in 257 attempts.

“I feel like he hasn’t been under pressure that much,” Thomas noted, “so I feel like if we can get him into passing downs and get pressure on him, hopefully we can cause a couple turnovers.”