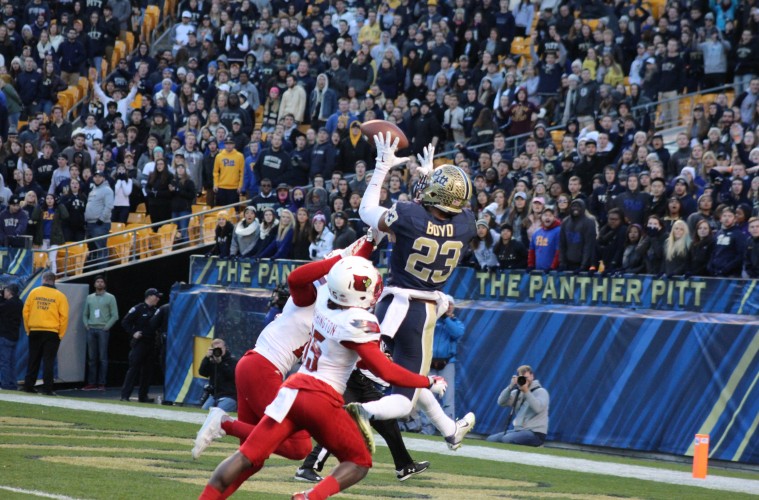 Louisville Football Let Itself Down vs. Pitt

Louisville Football let itself down on Saturday.  It wasn’t about the final score 45-34 or losing to a good football team on its home field.  As Keith Kelsey said in his post-game comments: “It’s about pride”.  And that’s the problem…..this team has an extreme amount of talent.  AN EXTREME AMOUNT OF TALENT.  But for some reason it’s pride has to be drawn out from somewhere else……not within.

There was no reason for the 3rd quarter vs. Florida State.  There was no reason for a 35-point 2nd quarter on Saturday vs. Pitt on Heinz Field.  Pitt is a good football team and they had a good plan, but the Panthers hadn’t scored 35 points IN A GAME vs. an FBS opponent this year.  So while Pitt is a good football team, this was more about Louisville than it was about Pitt.  Two Touchdowns?  Fine.  FIVE?!!??!  No way.  That’s on the Cards, that’s on PRIDE.

Coaches can only bring players along so much, at some point leadership has to come from INSIDE the team and motivation can only happen from within one person to the next.  Louisville is young, but being competitive is being competitive. Football, checkers, or table tennis you either walk on to Heinz Field like it’s the only game you’ll ever play or you treat it like it’s a walk in the park.

It’s hard for fans, writers, and announcers to get mad though….they didn’t train an entire year to play 12 games in 13 weekends.

Let’s take a look at what went wrong:

Offense Could Not Sustain Drives

A lot of folks might start with the defense and I’ll get to that, but Louisville had the ball for 22:22 of 60 minutes and had a PICK 6.  Allowing a non-offensive TD usually allows teams to WIN time of possession (which is why it’s not a reliable stat) but when Louisville gave up that PICK 6 AND STILL ONLY HAD THE BALL FOR 22:22 THAT’S A MAJOR PROBLEM.

Not a single possession lasted longer than 2:40 seconds. 7 sacks allowed. 5 sacks by a single player. -1 yard rushing and a Pick 6. That’s not going to win many football games no matter how well your defense is playing.

Bobby Petrino said after the game that he was disappointed in the defense because his defensive unit has experience, talent and leadership.  That defense gave up 4 Touchdowns in a single quarter.  There is too much talent on the defense for that to happen.  The investment in the coaching staff is too extreme for that to happen.  Louisville has grown a defensive culture since 2010….All Top 25 defenses….all kinds of pride.  But that’s all on the table now.

It is understandable for Louisville’s defense to crack a time or two.  It’s college football.  And with the way the offense has really put a ton of pressure on the D in 2015 (and 2014) a unit can only take so much.  But Pitt’s offense was really two-pronged:  #23 (Tyler Boyd) and #37 (Qadree Ollison) and oftentimes the Cards knew exactly what was coming….and couldn’t stop it.

Can Louisville Football excel at this stage with its veteran, talented, and experienced defensive unit mailing in the effort for an entire quarter?  No. It’s time that this unit start playing to its potential all the time.  4 quarters a game, 13 games in a season.  The Cards have 2 more games in 2015 to show that they mean to maximize their talent all of the time.