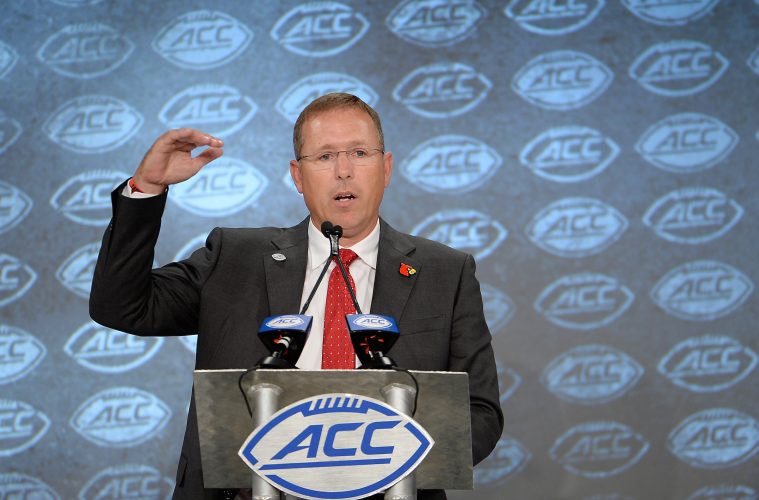 Scott Satterfield took over from a dismal 2018 season that will forever be remembered as one of the worst in Louisville Football history. This 4-year review will include those stats for the last time and from here on out, we’ll focus on the ups and downs of the Satterfield era.

It’s stunning to see how consistent the Louisville Offense has been under Satterfield. Each year the Cards score at 29.5-33.1ppg and the yardage gained is even more consistent at 444-448 ypg. That’s tough to do in any 3-year stretch.

The one thing that is clear, LOUISVILLE IS GOING TO RUN THE BALL. As a result the Cards have been consistent and they’ve averaged right at a 31:00 time of possession advantage over its opponents in the 3 years of Satterfield.

An obvious frustration is Louisville’s erosion on 3rd Down. The Cards were a Top 40 3rd Down team in its 1st two seasons under Satterfield but in 2021 UofL slipped to 66th.

One big thing Louisville was missing was Field Goal kicking in 2021. The Cards slipped from 15th to 111th in FG% in a single year and the the Kicker, James Turner, was the same. Louisville did have some tough kicks, but Turner missed some ‘have to have makeable” kicks too.

Make a few more kicks, win a few more games…… but put your kicker in better position OR score the TOUCHDOWN and problem solved. Go through the games when UofL could have punched it in (Clemson ring a bell?) and the outcome changes. Louisville has been to the Red Zone, 44, 44, and 45 times in the 3 years under Scott Satterfield. Incredibly consistent. Also Louisville has done OK scoring TDs in the Red Zone as well (32nd-45th in the nation). But put the ball in the endzone and the kicker does not matter.

Louisville did fix it’s sack and TFL problem offensively in 2021. Maybe it was the Offensive Line growing up (Caleb Chandler being awesome, moving Boone to guard, emergence of Trevor Reid, Renato Brown and Michael Gonzalez, Bryan Hudson addition and Cole Bentley Leadership) but UofL was 25th in Sacks Allowed and 28th in TFLs allowed. That’s the first Top 30 performance in both categories in over 20 years. Huge. Keep that going and the Cards and keep the chains moving in 2022.

Louisville was #10 in the nation in Yards Per Play in 2021. The Cards have been in the Top 20 each year under Satterfield as the play caller. Louisville may not run a ton of plays, they may not play with a lot of pace….. but they are effective each snap. Finishing #10 in 2021.

If the offense is consistent, the defense just frankly hasn’t been consistent at all. Understandably in Year 1, the Cards were a work in progress coming off that awful 2018 before the current staff came onboard. We saw strides and 2019 and 2020 and then significant slippage in 2021. There might be reasons for that (depth, injuries, youth, etc.) but we’re only looking at the numbers right now.

If Louisville is going to be a 444 ypg & 32 ppg offense they’ll need to get significantly better defensively. Presently the gap between Louisville’s production on both sides of the ball is too slim and turnovers, bad luck and close the gap….. and that’s exactly what we’ve seen over the past 2 seasons…. Louisville losing a bunch of games when outgaining its opponent.

It’s time for the defense to step up in 2022. Louisville in 2021 gave up way too much in the secondary. Maybe that’s the league having outstanding QB or maybe it’s Louisville’s rush defense edging towards respectability. Either way, the Cards quite simply can not give up 245 ypg in the air and win a bunch of games.

On 3rd Down UofL just HAS to get better. It’s been OK during the Bryan Brown era ranging from 54th-61st but the Cards need MORE from its defense on 3rd down in order to play complementary football (if UofL wants to be a run first solid offense).

In the Red Zone Louisville is just giving up way too many trips to the Red Zone. Not shock that 3rd Down stops correlates to Red Zone Trips Allowed, but the Cards have ranged from 82nd-92nd nationally in Red Zone trips. That’s WAYYYY too many scoring opportunities for opponents. Change this and you’ll get more punts and long field goal attempts and all of the sudden we are playing complementary football.

Yards Per Play HAS to be better for the Louisville Defense. The Cards have ranged from 72nd-110th under Satterfield and Bryan Brown and while they have generally been better than their opponent (offensively) the margin for error is simply too tight for the Cards to take advantage more often than not. Louisville has to find a way to get into the Top 50 in ypp in 2022.

Yards Per Point is a metric that measures special teams, defensive turnovers, field position and the offenses ability to execute when given great opportunities. Good teams find their way way up on Yards Per Point…… but lucky teams also end up here too. Louisville has been average in YPP ranging from 43rd in 2019, to 89th in 2020 to 52nd in 2021. Find yourself in the Top 20 of Yards Per Point and you have a really good team or a really lucky team……. and I’ll take either.