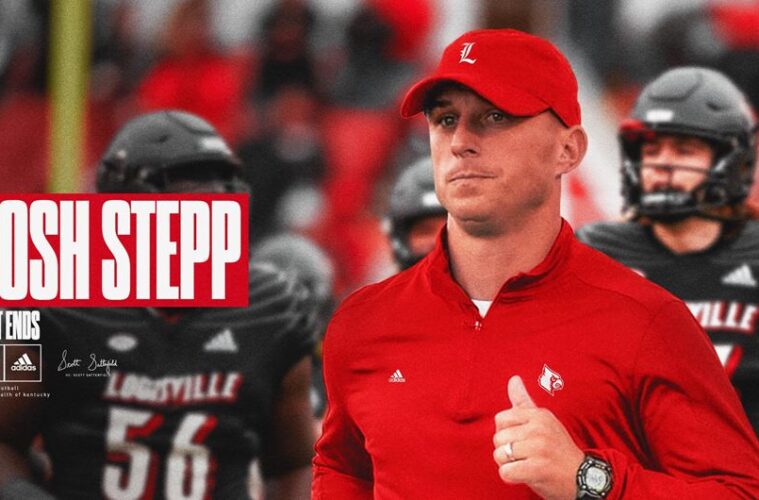 Satterfield also declared that Nic Cardwell will coach the offensive line and Lance Taylor will proceed with the wide receivers.

“Hiring Josh to coach our tight ends solidifies our coaching staff,” Satterfield said. “Having been a coordinator, Josh matches our offensive philosophy and want we are trying to do with our scheme. I’m excited for the experience he brings to the tight end room and I know our players will benefit from his expertise.”

Stepp joins the UofL staff after six seasons at Georgia State, where he coached tight ends and running backs before he was promoted to offensive coordinator and quarterbacks coach in January.

Stepp was a key member of the offensive staff that produced record-setting units, leading the Panthers to four straight winning seasons and bowl berths. He helped the GSU offense produce the top three scoring figures in program history and three of the top four total offense marks over the last three years.

Stepp assisted with a running game that ranked in the top 10 nationally. During the 2021 season, Georgia State ranked No. 8 in FBS in rushing at 226.4 yards per game, the second-best mark in school history, while winning a school-record eight games and posting a 51-20 win over Ball State in the Taxact Camellia Bowl.

In his first five seasons at GSU, Stepp primarily coached the tight ends but also worked with running backs and served as recruiting coordinator in 2020.

Under Stepp, tight ends Roger Carter and Aubry Payne combined for five All-Sun Belt Conference Awards in three years and were key weapons in both the running game and passing attack. Carter is the Panthers’ career leader in receptions and receiving yards by a tight end, while Payne has the tight end record for touchdown catches.

Formerly the head football coach and athletic director at Lexington (S.C.) High School, Stepp joined head coach Shawn Elliott’s staff in 2017. He coached both running backs and tight ends in his first year, including All-Sun Belt Conference all-purpose back Glenn Smith, and then focused on the tight ends beginning in 2018.

Stepp was chosen for the 2019 American Football Coaches Association 35 Under 35 Coaches Leadership Institute.

In four seasons at Lexington, Stepp posted a 36-17 record from 2013-16, despite inheriting a program that had gone 3-8 the year before he arrived. The Wildcats posted winning records and reached at least the second round of the playoffs in each of his four seasons.

The highlight of his tenure came in 2015, when he led his squad to a 13-game winning streak and a berth in the state championship game. Along the way, Lexington knocked off top-seeded and nationally-ranked Spartanburg to advance to the Class 4A, Division II state finals for the first time in 15 years. Stepp was honored as 4A Lower State Coach of the Year and Region V Coach of the Year.

He began his coaching career as an assistant at Pelion (S.C.) High School, his alma mater, in 2007 and continued with assistant coaching assignments at Blythewood High (2008) and Spring Valley High, where he served as offensive coordinator in 2009.

Stepp earned his first head coaching position at Dreher High School, where he coached three seasons (2010-12) before taking over as head coach and athletic director at Lexington. He led Dreher to an 8-2 mark in 2012 for the school’s best season in more than a decade.

A three-sport standout at Pelion, including all-state honors in football and baseball, Stepp began his college career at Furman. He transferred to Newberry (S.C.) College and enjoyed a enjoyed a record-setting three-year career at quarterback (2004-06), including All-America and National Player of the Week honors. He finished as Newberry’s all-time leader in passing yards, touchdowns and completions, and he was recently inducted into the school’s Athletic Hall of Fame. He is also a member of the Pelion High School Hall of Fame.

Stepp and his wife Caryn have four children.