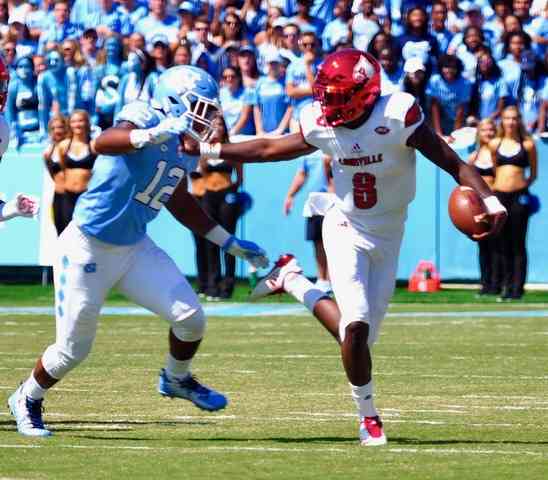 Already a semifinalist for the Maxwell Award, University of Louisville quarterback Lamar Jackson was named one of 16 semifinalists for the Davey O’Brien Award on Tuesday.

Jackson also was a finalist for the award last season, which is given to the nation’s top quarterback.

Statistically, Jackson, who accounted for 5,114 yards of total offense and 51 touchdowns last season, has amassed 3,837 yards and 32 touchdowns in 2017. He’s completed 196-of-326 passes this year with 18 touchdowns to just six interceptions while throwing for 2,808 yards and rushing for 1,029 yards and another 14 scores.

Rushing for 161 yards in a loss to Wake Forest on Oct. 28, Jackson became only the fourth player in school history to rush for over 1,000 yards in consecutive seasons, extending his school record for career rushing yards to 3,560 and 46 touchdowns.

As a passer, Jackson has thrown for over 300 yards in six games this season and owns a streak of nine-straight games with a touchdown throw. He sit in fifth all-time in school history with 8,191 yards and 60 touchdowns.

With 330 yards passing versus the Demon Deacons, Jackson became only the fourth player in NCAA history to pass for over 8,000 yards and rush for 3,000 yards in a career.

The Davey O’Brien Fan Vote counts as five percent during each round of the voting process, and is combined with the results from the Foundation’s national selection committee, which is comprised of journalists, broadcasters, commentators and former winners. The Fan Vote at VoteOBrien.org will be open from Nov. 7 until 1 p.m. (ET) on Sunday, Nov. 19. Fans are invited to cast their vote as often as once daily per email address.

In conjunction with ESPN, the Davey O’Brien Foundation and the award’s selection committee will release the names of the three finalists on Tuesday, Nov. 21. The 2017 Davey O’Brien winner will be announced live on The Home Depot College Football Awards on Thursday, Dec. 7. The 41st Annual Davey O’Brien Awards Dinner will be held Monday, Feb. 19, 2018, at The Fort Worth Club in Fort Worth, Texas.

Louisville plays host to Virginia on Saturday in Papa John’s Cardinal Stadium. Kickoff is scheduled for 3:30 p.m. ET on ESPNU.