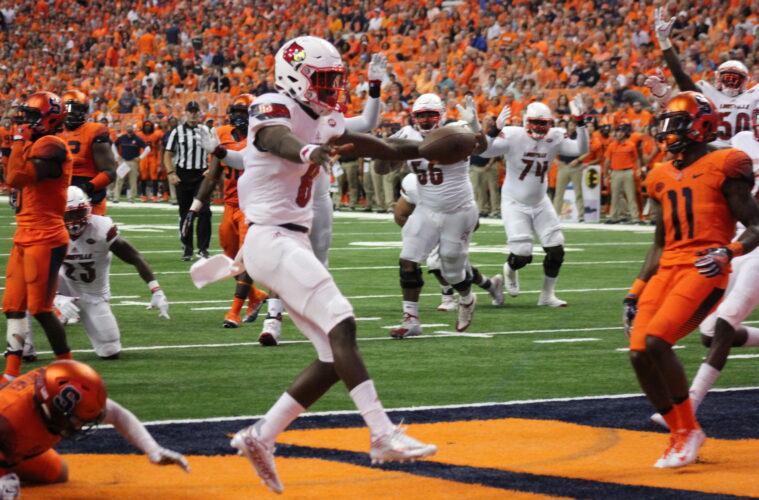 Lamar Jackson ACC Offensive Back of the Week

Louisville sophomore quarterback Lamar Jackson, who has accounted for over 1,000 yards from scrimmage in the Cardinals’ first two games, leads the ACC Football Players of Week for September 12.

Two Wake Forest players were recognized for their play in Saturday’s conference road win at Duke, as redshirt junior defensive end Duke Ejiofor picked up ACC Defensive Player of the Week honors, while freshman running back Cade Carney was voted the Rookie of the Week.

Pitt also had a pair of players recognized following its win over rival Penn State, as Ryan Lewis was named the Defensive Back of the Week and Quadree Henderson the Specialist of the Week.

North Carolina senior center Lucas Crowley was voted the ACC Offensive Lineman of the Week, while UNC sophomore Andre Smith was named the Linebacker of the Week following their play in the Tar Heels’ road win at Illinois.

Florida State junior Travis Rudolph is the Receiver of the Week following his performance in Saturday’s win over Charleston Southern.

ACC Football Player of the Week selections are determined by a vote of a 14-member media panel.

Jackson followed up his big numbers from week one by accounting for an ACC-record 610 yards from scrimmage in Friday night’s 62-28 win at Syracuse. The sophomore rushed for 199 yards while setting a school record for most rushing touchdowns by a quarterback with four. Jackson also completed 20-of-39 passes for a career-best 411 yards and one touchdown — including a 72-yard touchdown pass to James Quick on the first play of the game. He became the first player in FBS history to pass for 400 yards and rush for 175 yards in a game. Jackson currently ranks second nationally in total offense with an average of 507 yards per game, and has accounted for 13 touchdowns (six rushing, seven passing) to lead the Cardinals’ 2-0 start.