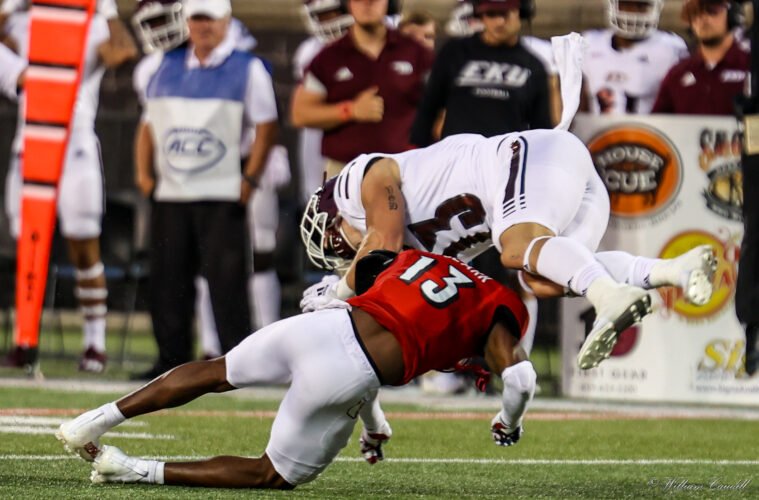 Kei’Trel Clark Named ACC Co-Defensive Back of the Week

QUARTERBACK –Brennan Armstrong, Virginia, Jr., QB, Shelby, Ohio
Earned second straight ACC Quarterback of the Week honor following a career day in the Cavaliers’ 42-14 victory against Illinois • Completed 27 of 36 pass attempts for 405 yards and five touchdowns • Passing yardage was the fourth best single-game total in UVA history • Became just the second Cavalier to throw for 400+ yards and five touchdowns in a game • Completed a career-high 27 passes • Also caught a pass for the first time in his UVA career, gaining 18 yards on the play • Had nine pass completions of at least 20 yards • Currently leads the ACC in total offense (387.50 ypg.) and passing (372.0 ypg.).

RECEIVER – Jelani Woods, Virginia, Gr., TE, Ellenwood, Ga.
Woods had a huge game in the Cavaliers’ 42-14 win over Illinois • Recorded a career-high 122 yards receiving, the most by a Cavalier tight end since Tom Santi (128 yards) in the 2005 Music City Bowl against Minnesota • Woods more than doubled his previous career high of 54 yards receiving (Oct. 24, 2020, while at Oklahoma State) • Averaged 24.4 yards per catch against the Illini and had three catches of at least 28 yards.

OFFENSIVE LINEMAN – Olusegun Oluwatimi, Virginia, Sr., C, Upper Marlboro, Md.
Keyed a Virginia offensive line that did not surrender a sack to Illinois in 40 passing plays • Graded out at 88.2 percent (based on Pro Football Focus system) and had nine pancake blocks • Key part of an offensive attack that piled up a total of 556 yards in the Cavaliers’ 42-14 victory against Illinois.

DEFENSIVE LINEMAN – Jordan Domineck, Georgia Tech, So., RE, Lakeland, Fla.
Recorded five tackles, three tackles for loss, a sack, two forced fumbles and a 70-yard fumble return for a touchdown in Georgia Tech’s 45-17 win over Kennesaw State • Turned in one of the nation’s top defensive plays of the weekend in the first quarter of Saturday’s win, when he forced a fumble on a pitch by KSU QB Xavier Shepherd, scooped up the loose ball and returned it 70 yards for a score to turn a potential tie game into a 14-0 Georgia Tech lead • Matched a Georgia Tech record with two forced fumbles, becoming only the 13th player in school history to force two fumbles in a single game • Helped lead a defense that limited KSU’s high-powered option offense to just 272 total yards.

LINEBACKER – Mikel Jones, Syracuse, Jr., LB, Miami, Fla.
Registered a team-high 11 tackles and a career-best 2.5 tackles for loss in Saturday’s game versus Rutgers • Helped lead the Orange defense to 13.0 tackles for loss in the contest, the fourth-highest single game total to date nationally this season, and the most versus a Power 5 opponent • Syracuse held Rutgers to 195 yards of total offense, 57 rushing yards and 3-of-15 on third down • Jones currently ranks ninth nationally with 11 tackles per game.

CO-DEFENSIVE BACK – Kei’Trel Clark, Louisville, So., CB, Richmond, Va.
Finished the night with a team-high six tackles, two for loss, and a pair of interceptions in Louisville’s 30-3 win over Eastern Kentucky • First Cardinals player to record two interceptions in a game since Trumaine Washington against Florida State on Oct. 21, 2017 • Two tackles for loss tied his career high.

CO-DEFENSIVE BACK – Brandon Hill, Pitt, So., S, Apopka, Fla.
Led the Panthers with seven tackles and came up with a game-clinching turnover in Saturday’s 41-34 win at Tennessee • With Pitt holding a one-touchdown lead and just under five minutes remaining, intercepted a Hendon Hooker pass at Pitt’s 17 and returned it 25 yards • The Panthers then ran out the final 4:52 of clock time for the victory.

SPECIALIST – Travis Levy, Gr., Boston College, KR, Olney, Md.
Returned a kickoff  96 yards for a touchdown in Saturday’s 45-28 win at UMass • Stands as the longest return of his career and his first score in 49 career returns  • The 96-yard kickoff return also tied for the fifth longest in BC history.