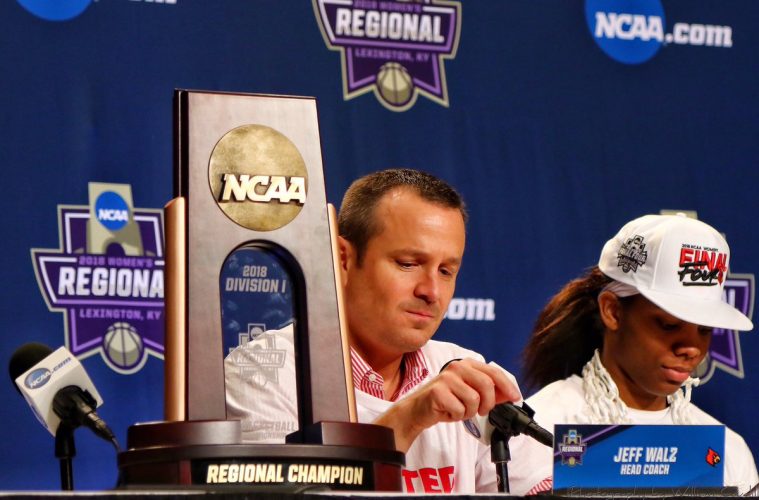 University of Louisville women’s basketball head coach Jeff Walz and his staff announced today that they have signed Nyah Green, a 6-foot-1 guard from Allen, Texas, and Ramani Parker, a 6-foot-4 forward from Fresno, Calif., to its 2019 class.

“We are thrilled to sign both Nyah and Ramani,” said Walz. “We’ve proven year after year that we will travel wherever necessary to find players that are a fit for our program. To get Nyah from Texas and Ramani from California is very exciting, and I can’t wait for our fans to get a chance to watch them play.”

Walz and his staff have signed nine McDonald’s All-Americans – with this year’s honorees still yet to be announced.

Nyah Green comes to Louisville as the No. 12-ranked player in the class of 2019, according to espnW HoopGurlz. The five-star prospect is tabbed as the seventh-best player at the guard position. She is ranked seventh overall and as the third-best guard by Prospects Nation.

She led Bishop Lynch to a TAPPS 6A state runner-up last season, averaging 18.7 points, 8.0 rebounds and 2.1 assists in 37 games. At the conclusion of the season, she was named TAPPS 6A MVP and MaxPreps High School Girls Basketball All-American Team honorable mention.

She averaged 14.9 points and 5.0 rebounds as a sophomore when Bishop Lynch won the TAPPS 6A state championship. She was a first-team all-state selection.

Green is transferring to Allen High School for her senior season, the school she attended as a freshman.

She is on the Citizen Naismith High School Girls’ Watch List.

What they’re saying about Nyah Green

“Nyah was the first to commit to us her freshman year and we have all anxiously awaited this day to make it official. Nyah and her family are an amazing group of people who will be great ambassadors for our program and the university. Nyah is a big guard who can play multiple positions and create mismatches across the board. She has played at an elite level for many years and will bring a winning attitude and skillset that fans will gravitate towards. She is a top level scorer from the perimeter and has a deadly pull-up jump-shot. Her wingspan will create havoc on the defensive end and her tireless work ethic will no doubt enable her to make an impact at an early stage.” Jeff Walz, Louisville head coach

“Consistently ranked among the nation’s elite players for years now, Green has size in the back court and a quality offensive game that is still growing. Coveted by many and committed to Louisville for some time now, Green should challenge early and make an immediate impact.” – Dan Olson, owner and director of the Collegiate Girls Basketball Report and director of espnW HoopGurlz

“Confident, attacking, scoring combo-guard. Scores in a variety of ways in open and half-court. Creates space off dribble, finishes with flare around basket. Pull-up in lane, with range to the arc. Fits perfect with the Cardinal system for Jeff Walz. One of the top players coming out of the 2019 class.” – Harry Elifson, Preferred Athlete Scouting Service

“Some players help make you a better person, Nyah Green was that player for me. Nyah will thrive under Coach Walz because she wants to be coached and pushed to greatness. Grounded in her spiritual convictions, this young woman understands that growth is a process and welcomes the hard road to success. I consistently asked her to sacrifice individual brilliance for the sake of team and she embraced the role of making her teammates better, becoming a terrific leader in the process.” – Ray Caldwell, San Antonio’s Finest Travel Team head coach.

“Nyah is an exceptional young lady who always carries herself the right way and treats others with respect. She is a family-first person, who loves and cares about the people close to her. As far as a player, she’s incredibly skilled and the way she handles the ball and passes is as good as anyone I’ve seen. She’s a big guard who creates mismatches. She will fit perfectly in Louisville’s open system.” –Tyler Relph, trainer

Ramani Parker is a four-star prospect and is ranked 99th overall in the class of 2019, according to espnW HoopGurlz. She is rated No. 13 at the forward position by espnW. She is rated 29th overall and as the seventh-best forward by Prospects Nation.

Parker played for Central High School in Fresno, Calif., before transferring to Montverde Academy in Montverde, Fla., for her senior season.

She is on the Citizen Naismith High School Girls’ Watch List.

What they’re saying about Ramani Parker

“We are so thrilled to add the length and athleticism of Ramani Parker. Ramani is a face-up forward with guard skills. She loves to run the floor and can spot up for 3-pointers in transition. She will create a lot of mismatches for opposing post players as she can post up with her back to the basket or bring her defender out on the perimeter. She will help us immediately on the defensive end as she is an elite shot blocker and has a nose for the ball. Ramani comes from a military family and understands discipline, teamwork, and trust. She is a fluid athlete whose game will continue to evolve as she adds strength and footwork.” – Jeff Walz, Louisville head coach

“Explosively athletic forward with a tremendous upside to her game. Plays taller than advertised, is quick and elusive in the paint. Parker could be a surprise performer as a rookie for Louisville.” – Dan Olson, owner and director of the Collegiate Girls Basketball Report and director of espnW HoopGurlz

“Super athletic forward with huge upside at the next level. The most athletic forward in the 2019 class. Attacks from the perimeter, finishes at the basket. Rebounds on both ends. Jumps out of gym. Will be an impact on the defense end of the floor with her versatility. With her athleticism and length, she will be a mismatch on both ends of the floor at next level. Best basketball in front of her.” – Harry Elifson, Preferred Athlete Scouting Service

“Ramani is a talented, athletic forward who can score inside and outside. She has a unique set of skills that is often developed in collegiate play. Her style of play is very versatile and she uses her length on both ends of the floor to capitalize on her opponents. When maxed out at her full potential, she is a lethal player that is very difficult to contain.” – E.C. Hill, Montverde Academy head coach

“Ramani Parker is one of the hardest working and most talented players I’ve ever coached. She is a nightmare matchup. She can play inside and outside. She has great footwork and the prettiest jump shot. Off the court, she is someone who will go out of her way to make sure everyone is doing fine. I remember in high school how excited she was to help with Special Olympics. Louisville has a very special person and talent in Ramani.” – Demetrius Porter, Fresno Lady Heat head coach

After opening the season with a 2-0 record, Louisville returns to action Monday when they travel to play at Boise State. They then venture to Las Vegas to take on Arizona State and Hartford. The Cardinals open their home schedule on Monday, Nov. 26 against Miami (Ohio).