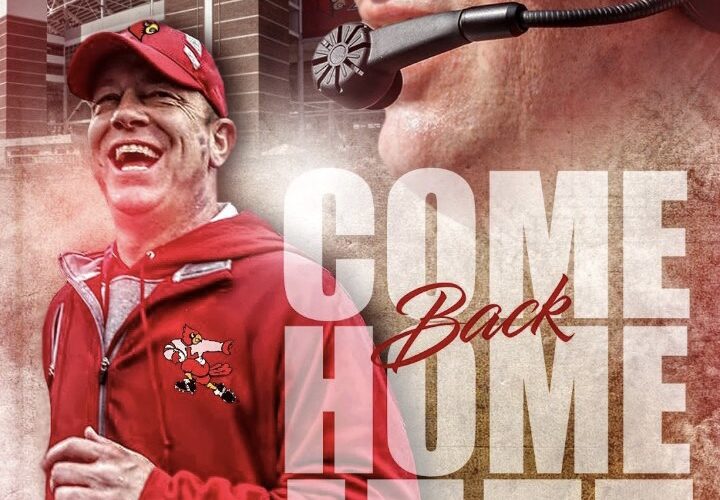 Jeff Brohm, one of the most accomplished signal callers in school history, returns to his alma mater to lead the University of Louisville football program, UofL Vice-President/Director of Athletics Josh Heird announced on Thursday.

The 24th head coach in school history, Brohm’s No. 11 jersey is one of 26 to be honored by the program throughout its history.

“We’re excited to welcome Head Coach Jeff Brohm and his family home to the University of Louisville,” Heird said. “The Brohms are synonymous with Louisville, and Jeff has made a lasting impact on our city as a high school star, college quarterback, professional athlete and coach. But beyond his ties to the city, what excites me most about Jeff is that he’s had success at the highest level of college football. To put it simply, Jeff is a proven winner. Along the way, he’s done it with an exciting brand of football that remains innovative and entertaining, and he’s done it by making the right decisions with the best interest of his student-athletes at the forefront. I knew we needed to identify a tremendous leader for our program who understood the history of Louisville Football, and who would be committed long-term to this school and this community. There’s not another coach in America who checks those boxes like Jeff Brohm.”

“Today is a great day for the University of Louisville as Jeff Brohm is coming home to the Commonwealth,” said Governor Andy Beshear. “Britainy and I want to personally welcome his family and we know he will not only be a great coach, but also a great member of our Louisville and Kentucky community.”

Brohm ushers in a new era of UofL football after elevating the Purdue program to unprecedented success during his six seasons as head coach.

Hired on Dec. 5, 2016, he guided the Boilermakers to four bowl appearances and the school’s first Big Ten West Divisional title in 2022. The Boilermakers fell to No. 2 Michigan in the Big Ten title game, but Purdue was awarded a trip to the Citrus Bowl.

“My family and I are honored to return home to the University of Louisville, a place we love, which has been so influential in shaping me as a player, a coach and a man,” Brohm said.  “I am extremely grateful and humbled that Dr. Gonzalez, Dr. Schatzel, Josh Heird and the ULAA Board believe that I am the right person to lead this football program. I promise relentless energy, effort, and hard work every single day on behalf of all our coaches, staff and student-athletes.  Our goal is to compete for championships while also developing our student-athletes into true leaders on and off the field. These young men will make our university, our community, and our fan base proud to be Louisville Cardinals.  This city means a great deal to me and my family. Louisville is who we are. Thank you all for welcoming us back home.”

Prior to his arrival in West Lafayette, the Boilermakers won a combined nine games over four seasons. In his six seasons at Purdue, Brohm compiled a 36-34 overall mark with the Boilermakers. He led the program to notable victories, posting three wins over Top 3 teams: No. 2 Ohio State in 2018; No. 2 Iowa in 2021; and, No. 3 Michigan State in 2021.

In nine seasons as a head coach, Brohm boasts a career record of 66-44, a .600 winning percentage, and has positioned himself as one of the top offensive minds in the country. His passing offenses have placed in the top 20 in eight of his nine seasons as an FBS coach, which ranked 13th on average over that span.

In his tenure at Purdue, Brohm produced nine National Football League draft picks, highlighted by defensive end George Karlaftis, who was selected as the No. 23 pick in the first round by the Kansas City Chiefs in 2022. Wide receiver Rondale Moore was a second-round selection in 2021 by the Arizona Cardinals, and wideout David Bell was taken in the third round by the Cleveland Browns in 2022.

Playing in Brohm’s high-powered offense, several Boilermakers were honored for their accomplishments within the league. Moore and Bell captured back-to-back Big Ten Freshman of the Year awards and Big Ten Wide Receiver of the Year awards, while Brycen Hopkins was tabbed the Big Ten Tight End of the Year in 2019. Moore was also the 2018 Paul Hornung Award winner as the nation’s most versatile player.

The 2021 season featured a 9-4 record, the second-most wins in Purdue history. The Boilermakers tied for second in the Big Ten West, which included a pair of Top 5 victories over No. 2 Iowa and No. 3 Michigan State, which handed both teams their first loss of their respective campaigns. The Boilermakers capped the campaign with a 48-45 overtime victory over Tennessee at the TransPerfect Music City Bowl in Nashville, Tenn.

Purdue exceeded all expectations in his first season in 2017 and put the program on the map nationally. The Boilermakers won seven games, recaptured both of its rivalry trophies (the Cannon and the Old Oaken Bucket), and finished the season with Foster Farms Bowl victory over Arizona. They followed that up in 2018 with another Bowl appearance, and Top 25 victories over Boston College, Iowa, and a monumental victory over No. 2 Ohio State at Ross-Ade Stadium.

In his first go-around as a head coach at Western Kentucky, the Hilltoppers were one of the most explosive offensive units in the nation, averaging 44.6 points, 356.6 passing yards and 526.2 yards of total offense per game over three seasons on The Hill.