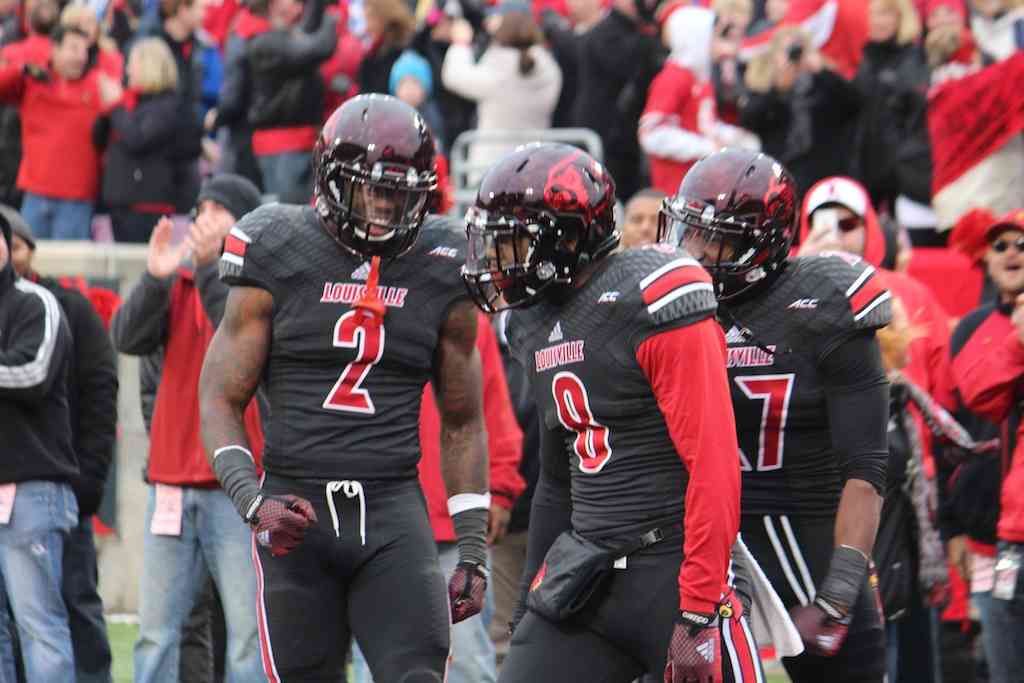 Gerod Holliman has 13 Interceptions this season, the most in school history and one shy of the NCAA Record of 14 that has stood for nearly a half-century.  After Holliman’s 3 INTs versus Boston College some national pundits floated Holliman’s name for the Heisman Trophy.

The only other primarily defensive player to win the Heisman Trophy is Charles Woodson (coincidentally who Vance Bedford also coached) at Michigan in 1997.   To win the Heisman, Woodson beat Peyton Manning, Randy Moss, Ryan Leaf, Curtis Enis, & Ricky Williams.  Charles returned 33 punts for 283 yards, played some wide receiver (11 receptions for 231 yards, 2 TDs), and had 8 Interceptions.  In addition to Woodson’s production Michigan finished the 1997 season undefeated (12-0) with a Rose Bowl win and ranked #1 in the AP, #2 in the coaches poll.

Gerod “Hot Rod” Holliman on the other hand doesn’t return kicks and hasn’t played a down of offense.  Gerod does has 180 yards of return yardage from him INTS, including 1 Touchdown and also has 31 tackles, 2 TFLs, 16 passes defended and 1 Forced Fumble.

Holliman’s 2014 has been OUTSTANDING.  But I am not ready to begin a Heisman Campaign.  I will however, advocate for Holliman to win the Jim Thorpe Award (Nation’s Top DB),  the Bronko Nagurski Trophy (Nation’s Best Defender), and the Chuck Bednarik Award (Defensive Player of the Year).

There are 2 games left to play so with a few more Interceptions and maybe a couple returned for a TD and I might change my mind.  But right now I think the Heisman is a little out of reach.  Winning the Heisman as a defensive player is RARE and even Charles Woodson had to do a lot of intangibles in all 3 phases to win it.  So let’s take a look at the more realistic options.

This is an award that Louisville Cornerback Coach Terrell Buckley won in 1991.  Even though Holliman plays Safety under Greg Brown at UofL, I do think it would be a special moment for T Buck to present this award to Gerod during the Awards season.

Legends like Terrell Buckley, Charles Woodson, & Deion Sanders have also won the award.  Since 2000 no Jim Thorpe Award Winner has more than 6 Interceptions.  To me, Holliman’s selection for the Jim Thorpe Award is a ‘no brainer’.

Holliman was named one of the 15 semi-finalists on October 27th and the Finalists are announced on November 24th with the winner being announced on December 11th on ESPN.

If Gerod Holliman can win this award he would be the 2nd winner from the University of Louisville in the past 10 years.  The other being Elvis Dumervil (currently 2nd in NFL in sacks with the Baltimore Ravens) who also played for Bobby Petrino and had 20 sacks in 2005.

The Nagurski Trophy hasn’t been awarded to a Defensive Back since 2003 when Derrick Strait of Oklahoma won the award with 3 Interceptions and 2 Fumble Recoveries (1 TD).  But classic DBs have won the award including Charles Woodson, Champ Bailey, and Roy Williams.

This is a much more competitive category for Holliman because it includes Linebackers and Defensive lineman and the award announces its finalists on November 20th with the winner being announced on December 8th in Charlotte, N.C.

Defensive Backs have had a better run at the Bednarik Award recently than the Nagurski with 2 of the past 4 winners being Defensive Backs, Tyrann “Honey Badger” Mathieu & Patrick Peterson.  Mathieu had just 2 INTs the year he won, and Peterson hauled in just 4 Interceptions.

Like the Nagurski Award this is a competitive category with all defensive positions being considered, but I think Gerod is well-positioned to win this award as well.

Holliman was announced as a semi-finalist for the Bednarik Award on November 3rd.  Finalists will be announced November 24th with the winner being award on December 11th on ESPN.

Should He Stay or Should He Go?

This is a tough one.  Holliman went to prep school out of High School and then red-shirted his 1st year at Louisville, so while he is a Redshirt-Sophomore with 2 years remaining after the 2014 season he is 4 years out of high school.  On the other hand, Holliman is playing just his first full season of college football.  Stepping up to the collegiate level was probably long overdue, but we can not ignore that Holliman just hasn’t played a lot of collegiate snaps.  Granted he has made the most of those snaps.

Several NFL Draftniks have recently said that Gerod Holliman has played his way into the 1st round.   I believe that is largely based on his interception total (which can’t be ignored).  But I also look at 25 solo and 6 assisted tackles (8th on team) for a starting safety and believe that Gerod could have more of an impact on the game.  Louisville’s defense is doing a great deal up front which takes a lot of tackles away from Holliman to go along with James Sample schematically designed to get more tackles (Sample leads the team) than Holliman.

In the NFL individual play is more important than scheme and I do worry that Holliman just doesn’t have the reps yet to guarantee tolerance in order to make an impact and gain his 2nd NFL contract.  THE SECOND NFL CONTRACT IS THE MOST IMPORTANT.  It used to be that the initial rookie deal and its signing bonuses were enough to promote early entry for projected 1st rounders….now with the new NFL Labor Agreement the most lucrative contract is the one following the rookie deal.

Last year I advocated for Calvin Pryor & Teddy Bridgewater to enter the NFL Draft early along with Damian Copeland who was forgoing his 5th year of eligibility after it was granted by the NCAA.  If I was advising Holliman I would advise him to return to Louisville for his junior year and really build on the hype of the defense and his play going into to 2015.  Holliman would leave some money on the table initially by doing this, but I do feel like he could go a long way towards ensuring an early impact during his 1st two seasons in the NFL and establish himself as a starter in Year 3 and a can’t miss player when it came time to ink his 2nd NFL Contract when he comes available in free-agency.

Rookie Deals are lucrative and certainly hard to pass up.  But 2nd contracts in the NFL are now generational setting deals and ensure a healthy retirement.  That’s what I want for any Louisville Cardinal considering an early entry….if you are 100% ready then absolutely go.  I would feel better about Gerod’s chances in the NFL if he returned for an additional season at Louisville.  There are still 3 games (bowl) that can change my mind and Holliman has time.   Players may contact the NFL stating their intentions for early declaration on January 5-15, but of course could declare prior to that time.