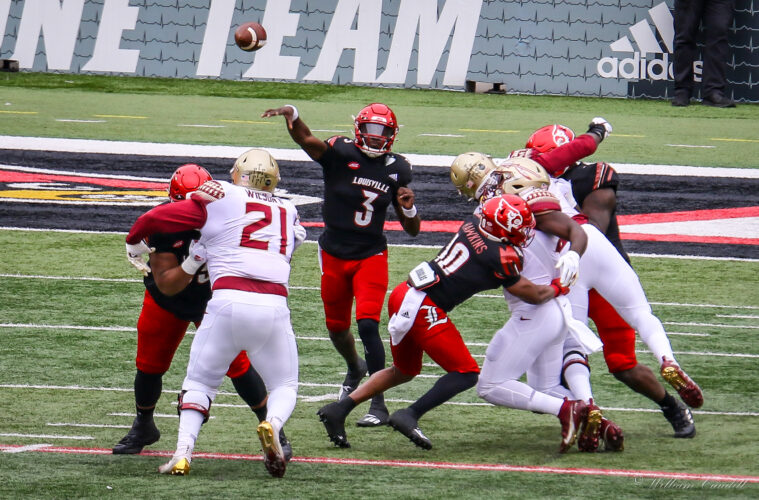 You wouldn’t think a program with 3 National Championships, 3 Heisman winners and the pedigree of Florida State would covet another program. But as is the case with Florida State, the Noles very much want what Louisville has. The “Louisville Envy” was on full display when last week Florida State debuted their “ICE” uniforms for this week’s road match up in Louisville and the program chose to highlight to former Cardinals: Jordan Travis and Jarrett Jackson.

Since the ACC series began in 2014 FSU & UofL are an even 4-4 with Louisville winning the last two meetings against the Seminoles. A crazy comeback in 2014 led by Jameis Winston prevented the Cards from opening their inaugural season in the ACC with a win over Florida State. That game was preceded by Florida State holding a work out at Louisville’s Waterfront Park (the city’s most visible park) and objecting to the public watching.

Everyone remembers the College GameDay UofL/FSU game where Showtime was ordered off the field in 2016 in the 3rd quarter. And of course the end of game play in 2018 where Louisville only had to run the ball to win, but Petrino called a passing play for Jawon Pass….. which led to an INT and ultimately the final score for FSU to secure the win.

But….. Florida State’s “Louisville Envy” has nothing to do with what happens on the field. It has to do with Louisville’s personnel that FSU covets: 2 Quarterbacks, 2 Defensive Lineman, 1 Corner and an Athletic Director.

This all started at the conclusion of the 2018 season season when Louisville suffered a mass exodus. Freshman Quarterback Jordan Travis and Defensive Lineman Jarrett Jackson were plucked away from the Cards. Travis, of course, remains Florida State’s starter and will face the Cards on Saturday. Jackson is currently the #2 DT for the Noles and got some face time last week on TV as Florida State won a thriller against LSU.

Then came the 2020 recruiting class. The Cards had locked up a young HS signal caller out of Arizona named Chubba Purdy. Purdy was a 4-star with a brother starting at QB for Iowa State. Louisville earned Chubba’s commitment on June 21, 2019……… and then he flipped to Florida State on National Signing Day.

AND LAST YEAR it wasn’t enough that Florida State attempted to poach Louisville’s Athletic Director Vince Tyra, the Noles also came after and landed Greedy Vance. UofL’s Board of Trustees even had a meeting changing Tyra’s contract terms waiving his non-compete if he did decide to accept the FSU job. Ultimately Tyra resigned from the Louisville AD spot and has since gone into private business.

Meanwhile there was rampant speculation regarding tampering in the case of Greedy Vance to Florida State. But in the era of a toothless NCAA, NIL, and one-time transfer who can really say. Greedy has played in both games for the Noles in 2022 and has totaled 3 tackles.

Despite all of the FSU poaching, the Cards have won two in a row over FSU. And really most of the games in the series have been interesting since 2002.