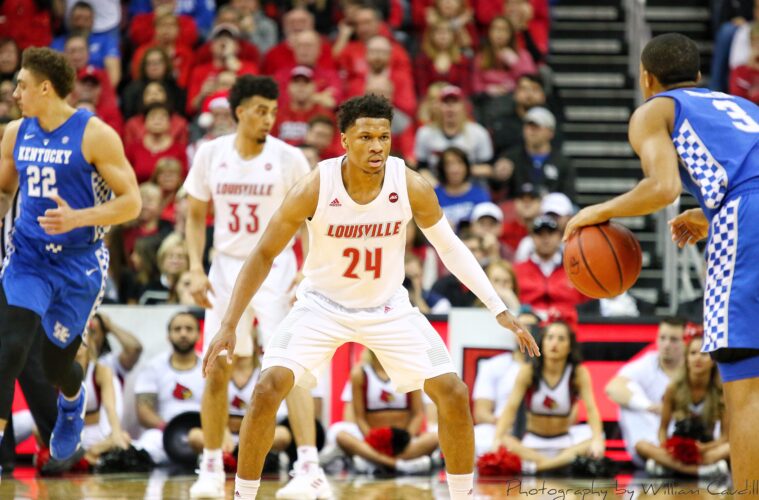 Dwayne Sutton Honored as ACC Player of the Week

University of Louisville junior forward Dwayne Sutton has been voted the ACC Men’s Basketball Player of the Week for Jan. 7-13 games.

In a pair of road games for the Cardinals last week, Sutton produced double-doubles in both games while averaging 14.5 points, 10.5 rebounds and 5.0 assists.

In Louisville’s 83-62 victory at No. 12 North Carolina, Sutton totaled a career-high 17 points, 10 rebounds, a career-best seven assists and four steals as Louisville had its widest margin of victory ever against an Associated Press-ranked team on the road.  Sutton became the first Louisville player in school history to have a double-double in points and rebounds combined with at least four steals and at least seven assists.

Sutton had 12 points and 11 rebounds in an overtime loss at Pittsburgh last Wednesday, when he scored his 700th career point and pulled down his 500th career collegiate rebound.

A starter in every game this year, Sutton has more than doubled his scoring average from last year — up from 4.3 to 10.0 this season — and his 6.6 rebounding average is 14th in the ACC.  He has already matched his three-point goals total from last season.  He averages a team-high 31.6 minutes per game (18th in the ACC).

ACC weekly honors are determined by a vote of a 15-member media panel and are announced on Mondays throughout the regular season. Pitt’s Trey McGowens received ACC Freshman of the Week accolades for the second time, averaging 20.0 points, 5.5 rebounds, 4.5 assists and 2.0 steals in two games.