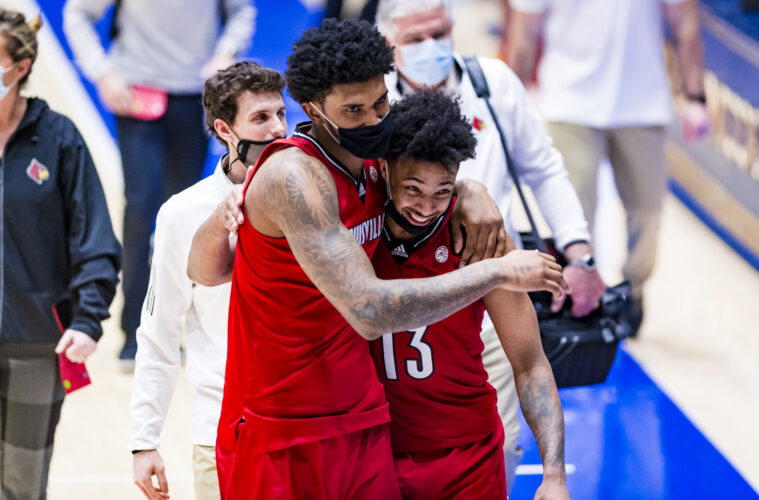 University of Louisville guard David Johnson will enter his name for consideration in the 2021 NBA Draft and forego his remaining collegiate eligibility, departing after two seasons with the Cardinals.

“First, I’d like to thank God for putting me in this position I’m in today. Without Him, this wouldn’t be possible,” said Johnson.  “To my Family, teammates, friends, and coaches, thank you for the endless support from the day I started this journey 15 years ago.  To the University of Louisville, thank you for taking me in with open arms and trusting my abilities as a young man.  To the city of Louisville, the love, support, and encouragement you’ve given has been imperative to my growth as “The Hometown Kid!” I thank you all from every word you’ve shared and everything you’ve done, I will always hold dear to my heart while showing appreciation to you.

“It has been a dream of mine to play in the NBA since I could remember and now it’s time to take the next step to get there.  My family and I value your continued prayers, love, and support as I forego my remaining years of college eligibility and enter the 2021 NBA Draft!”

“Two years ago, I had David in my office a couple months after his shoulder surgery,” said UofL Head Men’s Basketball Coach Chris Mack.  “It was September of his freshman year and I asked him what he was thinking in terms of playing.  He looked at me and said, ‘Coach, I’m going to be here two years and then head to the NBA.’ I said ‘that’s great DJ, but I mean when do you think you’ll be healthy enough to return?’ We’ve joked about that conversation since, but he sure made good on that promise.

“DJ is a terrific player and incredible representative of the University of Louisville. I’m going to miss coaching him, but I’m happy as heck for him and his family. He’s a first-round talent and a first-class kid, and he’ll always be a Cardinal.”

A 6-5 sophomore from Louisville, Johnson was the only player in the ACC to rank among the top 25 in both rebounding and assists, averaging 12.6 points, 3.2 assists (15th in the ACC) and 5.8 rebounds (21st). The 2021 All-ACC honorable mention selection scored 17 or more points in seven games, reaching double figures on 12 occasions this season (18 career).

Honored on the 2021 All-ACC Academic team, Johnson scored a career-high 24 points against Georgia Tech while grabbing 10 rebounds in one of his three double-doubles of the season. He set career highs in three-pointers made (6) and attempted (11), making one more three-pointer in the game than he hit during the entire 2019-20 season (5-of-23).

Johnson nearly doubled his scoring and rebounding averages from a year ago.  In his 19 games, Johnson had more than six times his three-point production from a year ago, burying a team-high 32-of-83 threes in his sophomore season (.386).

Johnson was honored as co-MVP with Carlik Jones in the Cardinals’ victory over Kentucky by the Bluegrass Sports Commission when he totaled 17 points, seven rebounds and four assists against the Wildcats while connecting on 3-of-4 three-pointers and playing the entire 40 minutes.  He was named ACC Player of the Week for games Dec. 21-27 and earned recognition on the 2020 Wade Houston Tipoff Classic All-Tournament team.

Johnson helped Louisville achieve a 13-7 record in a pandemic-shortened season as the Cardinals finished seventh in the ACC with one of the least experienced teams in the nation.