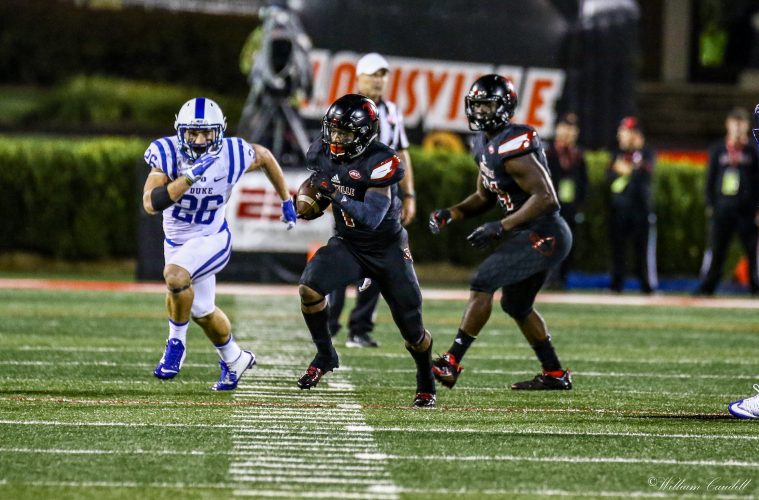 Louisville outlasted the Duke Blue Devils on Friday night which raised some eyebrows around the ‘Ville.  Fans were not happy that Duke was able to control the clock, convert on fifty-percent of their third downs, and keep the Louisville offense out of rhythm to an extent.

I took a look at exactly what happened and I think the ‘Cards won a unanimous decision against an unorthodox puncher that studied their opponent ad nauseam. Here is my breakdown on why this game was way closer than everyone thought it would be, check it.

Phase #1 – How Duke schemed for Lamar Jackson and the read option.

Lotta folks thought Lamar was missing his keys in the read option, here Duke disguises the defense, causing LJ to keep when he shoulda gave. pic.twitter.com/xtDkooIMQ9

Duke comes out in a 4-2-5 wide formation and shuts down the UofL sprint option play. Great play call by the Blue Devils and great execution. pic.twitter.com/KFz9ip4f7B

Duke again, does a great job not giving Lamar Jackson an obvious outside key on the read option and flowing to the outside to make a stop. pic.twitter.com/ScuBi02V6h

Duke did a good job sitting in the gaps and not over pursuing the read option in the first half. Duke kids are smart and they executed well. pic.twitter.com/wR3eKhT8wl

Brandon Radcliff takes a big shot in the hole from DT Brandon Boyce and poops out the big brown orb. pic.twitter.com/UoaLaLUErP

Phase #3: Hope for Louisville to screw up:

Also, miss me if you don't think this was a block in the back, it was. # pic.twitter.com/CzoKM59Hq6

Jeremy Smith misses a block and Lamar is forced to throw off his back foot resulting in a missed touchdown. Not everything is on the QB. pic.twitter.com/obD89uWssP

Lamar pulls a Randall Cunningham ball fake on the play action but side arms the throw flat footed rather than a backpedal over head throw. pic.twitter.com/z4oVA9XiaV

This boundary side pitchout to Radcliff woulda picked up more yards, maybe a TD, but the pulling tackle whiffs on the block downfield pic.twitter.com/t6HTitVkjD

Phase #3: Play conservatively to prevent turnovers and make timely plays on third down:

Great execution here by Duke on third and 10, throwing a tunnel screen into the vapors of the blitzing UofL secondary. pic.twitter.com/94ijxDhFnO

The one time I remember Daniel Jones keeping the ball in the read option he picked up a 1st down. Don't remember him keeping again tho. pic.twitter.com/NEEjCfk1z6

People wanted to blame Josh Harvey Clemons for Duke's first TD but I don't think it was his fault necessarily. Let me explain. pic.twitter.com/ntcQNS7QUh

Duke had been setting this play up all day with the quick screen game. Here KD Cannon bites, Lloyd runs the fade, TD Dookies. pic.twitter.com/ag17KdM94m

Despite Duke’s solid game plan, they couldn’t pull out the win, and this one boneheaded play right here is what did them in:

Louisville lucked out at the end of the game, as Lamar forces one into coverage and then Deon Borders rolls up on O'Hara's plant foot. pic.twitter.com/DhPkXl7XZJ

Also, Lamar Jackson was brilliant as always, and his steady play and resilience paced the ‘Cards and kept his team’s playoff hopes alive, as well as his Heisman candidacy.

Ever wonder what it means when you hear a QB shouting nonsensical words at the line of scrimmage? I gotchu. This is called "HOUSTON!" pic.twitter.com/abqkJfImJx

Lamar Jackson evades the rush, keeps his eyes down field, & flips a sidewinder about 48 yards in the air as Seth Dawkins makes a nice grab. pic.twitter.com/NbO0R7FjyM

Lamar Jackson does everything fast, including releasing the football. Watch him look down the gun barrel and throw a perfect laser. pic.twitter.com/ktU9FmU6As

If you have outside contain on #8 you have to target his outside shoulder with your inside shoulder and play outside-in. Inside-out is death pic.twitter.com/WVRHq1n6YU

Lamar Jackson's change of direction and acceleration is something to be marveled. pic.twitter.com/jdz8BSEar4

Oh yeah, Jeremy Smith’s 80-yard TD run and cameo on the Lamar Jackson show also was one of the key plays that really swung the momentum back in favor of Louisville, and obviously was the biggest play of the game.

Jeremy Smith to the house, UL gets away with some holding but that's football and you can't complain about every missed call. pic.twitter.com/BrnvT12LgO

Well that’s it folks, hope you learned something from all of this.  While it wasn’t the high scoring affair that UofL fans have grown accustomed to this season, it was still a solid win.  If you want to win a national championship in college football you gotta win the ugly ones, this was an ugly one, but UL escaped with the win and minimal injuries.  You gotta count your blessings when you walk away from a car wreck.

Check back next week, I’ll have a post game piece on the NC State game Saturday afternoon, and I will also have another game breakdown posted by mid-week.