Matt Jones made fun of Charlie Strong and Louisville football when the former head coach posted the “5 Core Values”.

He even ended the post with “Louisville football…you couldnt make it up if you tried.”

Turns out Louisville Football was ahead of it’s time.

Roger Goodell is set to meet coach Strong on how to repair the image of the NFL.

The point Matt makes is fine – should be obvious – but we are living in a world that is missing the obvious at times.

Now…Matt getting on his high horse to mock something the NFL wants to borrow (NOT STEAL)?  Priceless.

How many feet can fit into the mouth of Matt Jones?  I’ve lost count, but I can confirm….one more.

Honesty. Treat women with respect. No drugs. No stealing. No guns.

Scout.com Texas insider Chip Brown reported Thursday that Strong, now at Texas, is “supposed to meet” with NFL types within the next week “to talk about Strong’s commitment to his five core values.”

Indicating some contact had been made as of Thursday afternoon, NFL unior chief DeMaurice Smith tweeted, “Charlie Strong…good guy.” 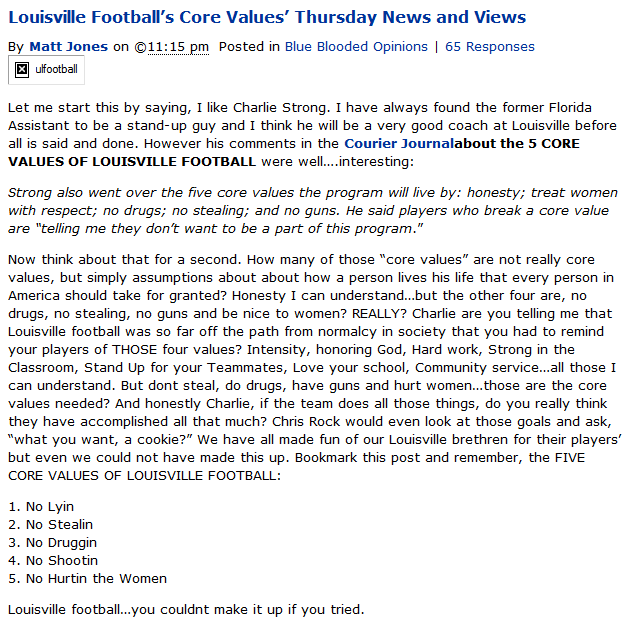