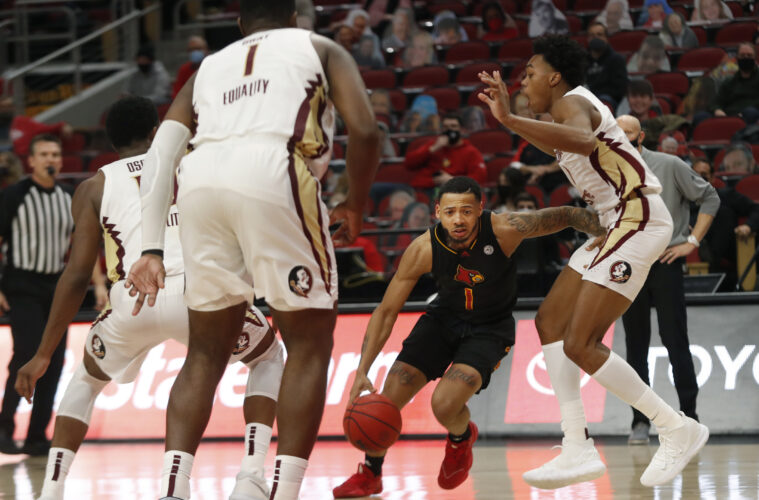 Louisville Basketball failed to break from the gate on Monday night against Florida State. Historically Louisville beats Florida State, the Cards are 34-15 all-time against the Noles…….. but not lately. UofL is 0-4 under Chris Mack (and Mack was eliminated by Florida State in the NCAA Tournament when Xavier was a #1 seed).

Prior to Mack’s arrival the Cards were 5-1 against the Leonard Hamilton coached Florida State Seminoles since joining the ACC. Florida State is clearly a problem for the Chris Mack coached Louisville Cardinals.

Tonight, Louisville started the game casually and found themselves down 40-16 in the 1st half. This isn’t the 1st time Louisville has started a game without enthusiasm, the Cards have only won the opening 4:00 segment 3 times in 12 games (UofL ended up winning the opening segment vs. VT despite opening with an 11-point deficit).

The Cards have MAJOR problems starting games. It’s a young team that for whatever reason needs a segment or two in order to begin playing well…… but no matter the reason it has to stop. We’ve heard Chris Mack & his assistants question his team’s effort several times this year. And the effort is keeping Louisville from having consistent results.

Chris Mack should not have to admonish his team to get great effort. These are young men playing College Basketball at the University of Louisville. If motivation comes from an external source then it doesn’t matter what Mack does. These guys HAVE to value the opportunity they have to cash in on the work they’ve put in over the course of the past year. Mack shouldn’t have to remind the team or individual players that they need to give more effort. There isn’t a coach out there who can fix lack of effort. The only thing Mack can do is bench players and recruit over top of them.

On the slow starts Villanova’s 2016 Jay Wright-coached National Championship warmed up with an insane amount of enthusiasm. Fans in the Yum! Center for Nova’s win over Miami & Kansas in the Sweet 16 & Elite 8 respectively walked away talking about the intensity of the Villanova warm-up and many questioned whether or not Wright’s team was expending too much energy prior to the game. They ended up winning the National Championship.

Regardless of what the problem is starting the game, any coach should insist on getting that effort somehow someway. Get it during the game or get it in practice or in individual drills. But no coach is going to sit idly by and watch his team take the floor as casually as Louisville did vs. Miami & Florida State and not get the effort somewhere else.

Now the Cards who were too cool to play hard to begin both games have found themselves with a two-game losing streak…… and internal problems (effort) that aren’t exactly easy to break. Playing hard is a natural mentality that you either have or you don’t….. and Louisville doesn’t have it. And that’s going to limit the Cards down the stretch as the games get tougher and the lack of effort will become easier and easier to identify.

The Cards will host Duke on Saturday and will try to break its two-game losing streak.