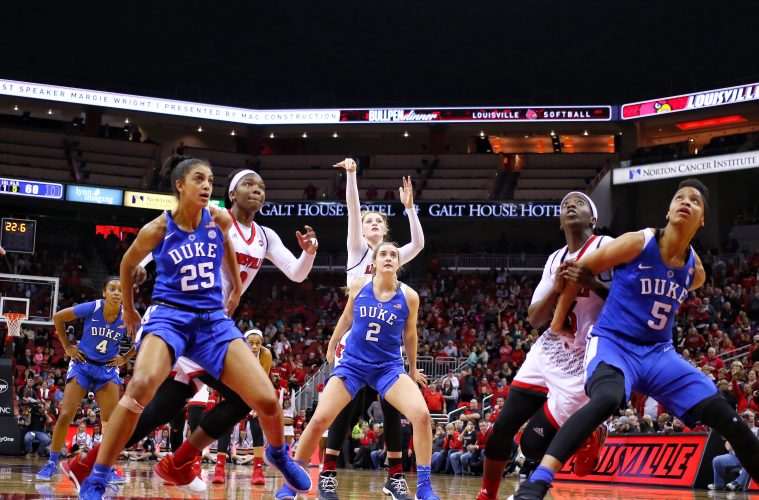 “Terrible defense…” that’s what Coach Walz called this one.  Even with a smile on his face.  That’s just the kind of man and coach he is.  He walked into the media room to what probably was a busted pipe right above the lighting fixtures and dripping in front of the podium.. “Boy times are rough!” he chimed, while noting a busted pipe at his own home over the New Year holiday.  In the same boat, my car didn’t make it into the new year!  The local frigid temps are to blame for the maintenance demand.   As for this game?  I’ve been watching the Cards play for 15 years, I know how cold it can get in the ‘Ville.  Even on the basketball front.

The ladies in red win the tip, and Asia is looking to score. She does and scores.  Just 4 seconds off the clock.  She had 14 of the Card’s 26 points in the first quarter.  The Cards shot 52.6% from the field & 66.7% from beyond 3 (Durr, 4-4).  Sounds good and all until you hear Duke shot 80% from the field in the quarter, a program best.  Durr would be the difference maker, per usual for Louisville.  Her and that Duke turned the ball over 7 times in the period.   Sam Fuehring was 3-3 while Myisha Hines-Allen had a rough start 1-6, 4 offensive rebounds.

The two teams would match in the second quarter shooting 63.6% (7-11) from the field, but the Dukies banked 2 more three pointers.  Hayley Gorecki also found her 3 point rhythm going 5-5 from the field, 3-3 beyond 3.  She had 13 points in the quarter finishing with 19 at half on 8-8 shooting.  Add 3 assists and 2 blocks to her tally.  Despite her performance, the Cards would secure a 10 point lead at half, 43-33.  Louisville had 15 assists at the break.. they would go on to finish the game with the same.   Also to note, a scare for beloved guard, Durr, as she fell to the floor and stayed there grabbing her ankle noted that she sort of twisted it.  The crowd of over 8,100 would remain silent as Coach LaMont would carry the junior off the floor… more than 5 minutes later she would jog back out on her own to rejoin the game.

The Cards would miss all six 3 point attempts in the 3rd quarter.  The defense, however, would also hold Duke to only 21.4% as Gorecki would not score and Duke’s leading scorer, Lexie Brown, to 1-5 FG, 1-3 beyond 3 and only 8 points in the game.

The Blue Devils would find a 4th quarter comeback that came up short where the Cards were obviously out-performed.  Duke used the same 5 players for the entire 10 minutes and out-score the Cards 18-10. Brown, however, still not able to get her shot going… 1-5 for only 3 points in the period.  Despite the Cards’ holding her to 2-12 on the day and hanging on to victory, after 2 big made free throws by Sam Fuehring and Jeff Walz displeased with the defense, the Cards would win by a score of 66-60 in their first game played back at KFC Yum! Center in the new 2018 year to remain undefeated on the season.

Myisha Hines-Allen had 13 points on 5-14 shooting and 10 rebounds (8 offensive) for her 35th double-double of her career, 6th on the season.  Despite leading the ACC in double-doubles, she was not pleased with her performance and Coach Walz notes she should be scoring close to 18 a night.   Asia finished with 22 and 5 rebounds.   Arica Carter was sharing the ball well with Asia while she was hot in the first quarter (4 assists) but the redshirt junior was 1-7 on the day missing all three 3 point attempts finishing with 5 assists and 3 turnovers.  Fuehring finished 5-7 for 12 points, 7 rebounds and 2 clutch free throws to secure the victory.