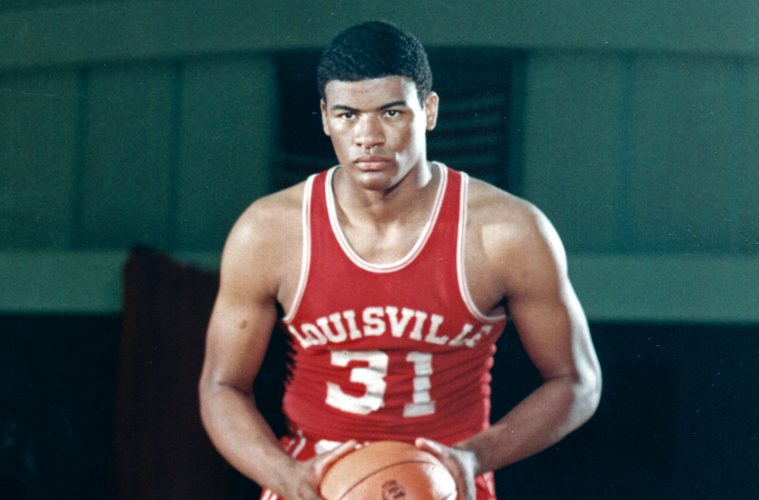 Wes Unseld, a member of the University of Louisville and Naismith Memorial Basketball Hall of Fame, passed away on Tuesday.  He was 74.

“Wes is one of my all-time favorite players,” said UofL Vice-President/Director of Athletics Vince Tyra.  “Like dad (former UofL All-America Charlie Tyra), he was a local player who had great success at UofL. What’s as impressive was his NBA career as both a player and coach.  Wes was a UofL and NBA Hall of Famer that used his platform to create change in education for generations to come.  He was truly one of the finest ever to wear a Cardinal uniform.  All of us in Card Nation offer our thoughts and prayers with the Unseld family.”

Unseld’s number 31 is one of just four retired numbers in UofL history.  In three seasons at UofL (1965-68), he amassed 1,686 points (11th at UofL) and 1,551 rebounds (2nd at UofL).  A consensus All-American during his junior and senior years, Unseld is one of only five Cardinal players to pull down over 1,000 rebounds in his career.

A native of Louisville who graduated from Seneca High School, he began his senior season with a 45-point effort against Georgetown College, a UofL single-game scoring record that stands today.

Unseld was honored on the All-Missouri Valley Conference team each of his three years at UofL while leading the Cardinals to a combined 60-22 record.  As a sophomore, he led the Cardinals to a final No. 2 ranking in both wire service polls while averaging 18.7 points and 19.0 rebounds. In his final season at UofL in 1967-68, he averaged 23.0 points and 18.3 rebounds when the Cardinals posted a 21-7 record and were ninth in the final Associated Press poll.  Unseld’s 20.6 career scoring average ranks as the best in Louisville history and his 18.9 career rebounding average is also the highest for a Cardinal.

Following his career at UofL, Unseld was chosen as the second player overall in the 1968 NBA Draft by the Baltimore Bullets.  He went on to play 13 years for the Baltimore/Capital/Washington Bullets (1968-81), where he became the second player in NBA history to be chose NBA Rookie of the Year and Most Valuable Player in the same season.  He was a five-time NBA All-Start and was named the Championship Series MVP when he led the Bullets to the 1978 NBA title.

He was enshrined in the Basketball Hall of Fame in 1988 and was selected among the 50 Greatest Players in NBA history in 1996 to honor the 50th anniversary of the league.  He served as head coach of the Bullets from 1988-94 and worked in the organization’s front office for many years.