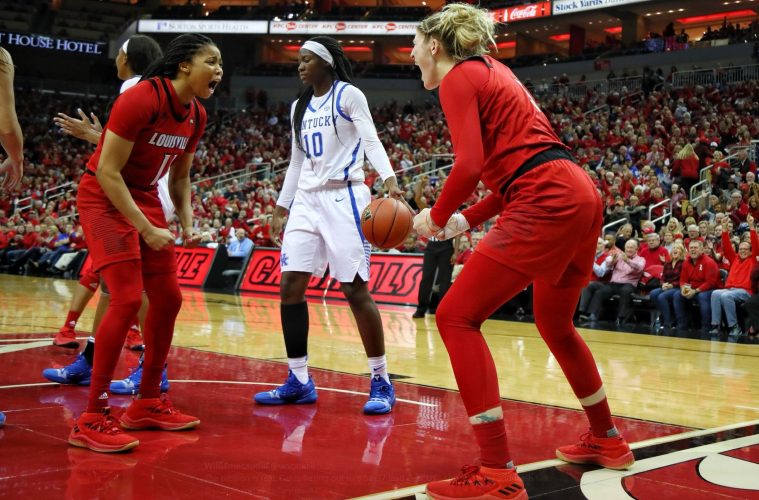 Asia Durr scored 32 points, as Louisville Women’s Basketball took down arch-rival Kentucky, 80-75 for their third straight victory over the Wildcats on Sunday afternoon inside the KFC Yum! Center.

Sam Fuehring hit a 3-pointer to open up the second quarter, while Durr chipped in an additional four points, as the Cards increased their lead to seven at halftime. The Cards held the Cats to just 26.7 percent from the field on 4-of-15 shooting in the second quarter.

Durr led the Cards in scoring in the first half with 19.

Jazmine Jones hit a 3-pointer to begin the second half for the Cards, as Louisville used a 21-10 run in the third quarter to take a 57-39 lead. The Cards took a 67-52 lead into the fourth quarter. Durr and Bionca Dunham led UofL in the period with seven points each.

In the fourth quarter, the Cards had to hold off a furious Kentucky comeback attempt, but two clutch baskets from Durr and some staunch defense was enough to hold off the Cats, and the Cards held on to win, 80-75.

Durr scored 32 points on 13-of-25 shooting from the field, including two three-pointers. Fuehring and Jones each added 12 points, while Dunham and Dana Evans chipped in with 11 and 10 points, respectively.

Fuehring and Dunham led the team in rebounds with seven apiece, while Jones led the Cards with four assists.

Next up, the Cards host another in-state opponent, the Norse of Northern Kentucky, on Saturday at 11:30 a.m.