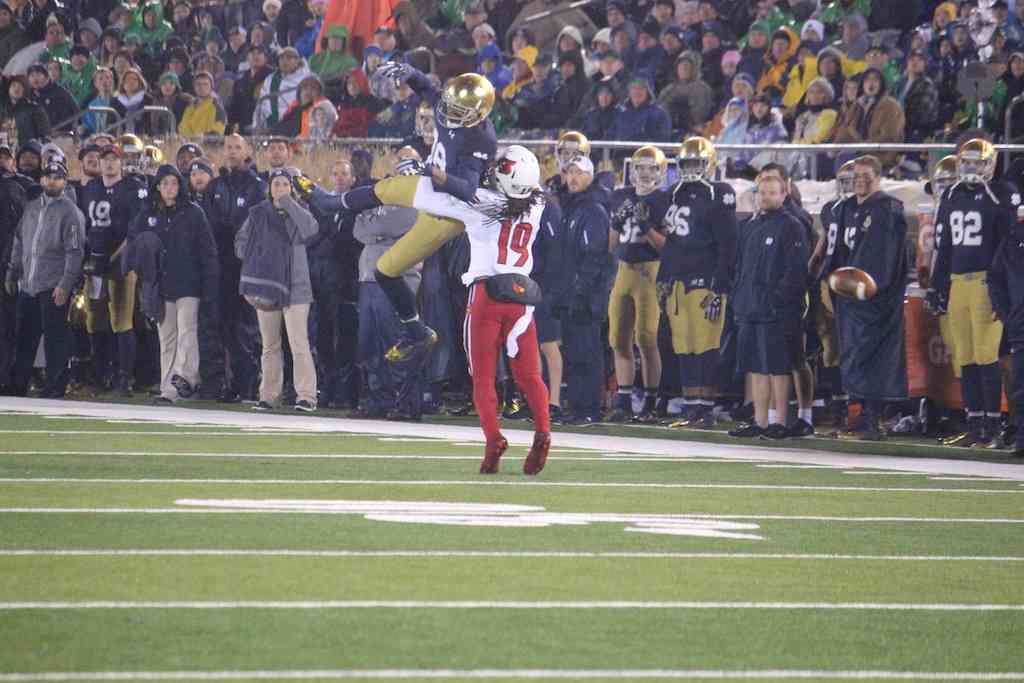 After last season it’s quite the culture shock that a trio of games featuring a road meeting at Syracuse would be considered the softest part of Louisville’s schedule. However, that appears to be the case. Louisville won’t play a ranked opponent over the next 3 games which will feature teams with a combined 4-4 record with losses against Bethum-Cookman and Louisiana Monroe. Once this skid concludes Louisville is slated to face a ranked opponent in every other game.

The good thing for Louisville is that this soft slate will allow Louisville to try a few new things. Could lineup changes be on the horizon? Possibly. I’ll break down a few potential ones here.

On a Tuesday practice session with the media, Offensive Coordinator Garrick McGee essentially told the media each spot is up for grabs once again.

“This is a very important week of practice for the offense,” He explained. “Every spot will be earned on the practice field.”

He’s not lying. Bobby Petrino and company showed that even the Quarterback position is not safe. Just days after noting there was no Quarterback controversy, starting QB Will Gardner was pulled midway through the second quarter against Virginia after poor play in favor of Reggie Bonnafon. He didn’t return until the beginning of the fourth quarter. Seemingly in the course of about 25 minutes of game time, Gardner had lost his spot, forced questions about QB play, and then redeemed himself with back-to-back touchdown drives including taking the lead late.

Any questions about a potential QB switch will be answered over the next few games mainly because Louisville is forced to do it that way. Although Bonnafon won’t travel to Florida International after the death of his father, if they eventually choose to go with freshmen Reggie Bonnafon, they’ll want to get him ready against lackluster competition (IE Wake Forest, and maybe against Syracuse if the Cards play well enough) before reaching the meat of their schedule. I don’t expect that to happen. I still believe Gardner has a firm hold on the starting Quarterback position. I also think that’s the way it should be. The only difference now is that it’s closer than it was before and it’ll have to be earned a little more in both practice & games.

If you watched on Saturday, these positions are a pretty obvious eyesore – right tackle & center.

When asked if the offensive line would be any different against Florida International, Offensive Coordinator Garrick McGee simply said ‘I’m not sure’. Personally, I believe that loosely to translate to ‘we’re looking at that’.

Jake Smith has been solid at Right Guard, but Tobijah Hughley hasn’t been awesome at Center.  As a former walk-on it’s easy to give Hughley more of a leash on him given that he is a new scholarship player for the Cards.  Hughley has had his moments but it hasn’t been consistent enough and we can see the pocket ‘sink’ in the middle as a result.  Louisville just needs a stronger player there, and Jake Smith played Center throughout 2013 and has plenty of experience.

Starting at the Right Tackle position, Ryan Mack really struggled at Right Tackle Saturday against Virginia. I shudder at what a Clemson or Florida State would do to a Quarterback if Mack plays how he played Saturday…..then again could he really do worse?  He was blown by repeatedly making a rattled Will Gardner even more insecure in the pocket. I think the biggest change likely to occur will be inserting Kelby Johnson at RT – who has experience and played as a true freshman at Virginia.

With Kelby Johnson at Center the Cards could then place Ryan Mack or Skylar Lacy at Right Guard and try and mix & match the right personnel on the offensive line.  After Virginia production here is a necessity as the Cardinal offense can’t get grounded because of it’s line, which definitely happened against UVA.

The last lineup change that I’ll speak on has not been discussed nearly as much by coaches or fans but it’s one that I think Louisville would heavily benefit from.

It’s on the defensive side. It involves moving Terrell Floyd from Safety back to his natural position to Cornerback.  Trumaine Washington did a great job Saturday in replacement of Andrew Johnson who had a bad outing vs. Virginia.  Both of those players could play nickel, with Holliman at Strong Safety……OR putting Chucky Williams at Nickel.  Bobby Petrino has stated recently that Chucky has really come on lately.

The biggest concern coming into the season on defense was the Secondary, particularly the Safeties position. That’s to be expected considering Louisville lost a tandem of safeties to the NFL who had held down the spot for three consecutive years in Hakeem Smith and Calvin Pryor. Louisville hoped to mask this when they moved Terrell Floyd to Safety coupling him with an impressive transfer in James Sample. But after Saturday, and after Holliman’s performance and Andrew Johnson’s disappointment a change may need to be evaluated.

What all did Holliman do? 2 interceptions, 1 forced fumble, 1 tackle for a loss and 6 tackles total in limited action. I don’t know about you but to me those stats make me think he should see more playing time.

The other side to this is what happened to Andrew Johnson, whom Terrell Floyd would replace if this move occurred. He was picked on and there wasn’t a thing he could do about. Andrew Johnson is 5 foot 9, he was guarding Myles Gooch who is 6 foot 5. Given he’s leaping ability – although no matter how high you could job in this particular mismatch – Johnson never stood a chance. He was burned a countless amount of times and once for a Touchdown.

Replacing Johnson with Terrell Floyd would give you a taller defender, as Floyd is 5-11, and also given you one that has shown more playmaking ability when placed in that role. That’s evidenced by his 4 interceptions, 47 tackles and 13 consecutive starts all coming from that position last season.

It’s important to remember that Louisville could simply keep everything the same and see what happens. However if Louisville wants to shake up positions or starting spots, now would be the best time to make that happen.