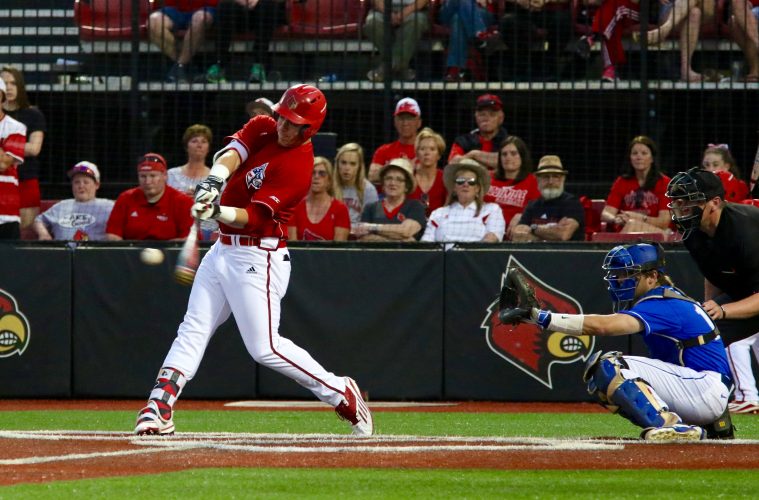 Pairings and game times for the 2016 Atlantic Coast Conference Championship were announced on Sunday and for the second consecutive year, the Louisville baseball team will open under the lights at Durham Bulls Athletic Park in Durham, North Carolina. The second-seeded and Atlantic Division champion Cardinals will begin its Pool B schedule on Wednesday at 7 p.m., ET against the winner of Tuesday’s first round contest between No. 7 Duke and No. 10 Wake Forest.

Following a day off on Thursday, Louisville (46-10, 22-8 ACC) will continue its pool-play slate against No. 6 Clemson on Friday at 11 a.m., before concluding the preliminary action with another primetime contest versus No. 3 Virginia on Saturday at 7 p.m. After each team has played its three pool-play games, the two teams with the best records within their respective pools will advance to the title game on Sunday, May 29 at noon with the winner earning the ACC’s automatic berth into the NCAA Championship.

Miami is the No. 1 overall seed and will lead Pool A. The Hurricanes are joined by fourth-seeded Florida State and fifth-seeded NC State, while No. 8 Boston College and No. 9 Georgia Tech will play Tuesday in the first round with the winner joining the pool. Ticket packages and single-game tickets are available for next week’s championship by calling 919-956-BULL or visiting http://theacc.co/BASE16tix.

Radio coverage for all Louisville baseball games at the ACC Championship and throughout the postseason will be provided by 93.9 The Ville. Regional Sports Networks from across the conference footprint and across the nation will carry all 14 games on Tuesday throughSaturday. Sunday’s championship game will televised nationally by ESPN2. All games will also be available on ESPN3.

In addition, the games on Tuesday through Saturday will be broadcast via satellite radio on Sirius 106/XM 193, while Sunday’schampionship will be on SiriusXM College Sports National Channel 84.

The ACC Baseball Championship FanFest will be held just outside Durham Bulls Athletic Park on Saturday, May 28, from 2 to 7 p.m. and on Sunday, May 29, starting at 9 a.m.