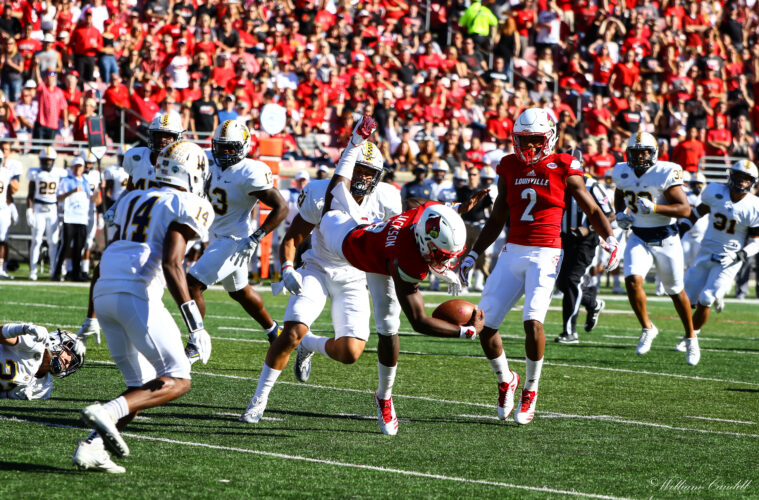 A Better Solution For FCS Opponents: Spring Games Or Pre-Season

This week the University of Louisville will take on Football Championship Subdivision (FCS) Indiana State of the Missouri Valley Conference.  The gaps between resources and profile between UofL & Indiana State are vast. Indiana State has a very nice campus in Terre Haute, IN and is often named as a “Best in the Midwest” university by the Princeton Review .  In 2016-17, Indiana State’s Athletic Budget was $16.1 Million.  Louisville’s in 2016-17 was $120.4 Million.

FBS schools win 83.4% of all time matches vs. FCS schools, the winning percentage is even higher of Power 5 FBS schools vs. FCS schools.  There are some instances where FCS schools sneak up and SHOCK a Power 5 program, but those instances are few and far between.  And for Indiana State vs. Louisville it’s even less likely.  Indiana State did beat Quincy in shutout fashion last week 49-0.  Quincy last season was 3-8 and has lost their last 7 games.  The Sycamores of Indiana State were 0-11 last season and their one try vs. FBS was against Tennessee (Loss 49-7).

Notre Dame, Southern Cal, and UCLA are 3 programs who have never scheduled an FCS program. The Big Ten announced that beginning in 2016 its conference membership would no longer be permitted to schedule FCS schools……BUT then changed the policy to allow schools (like Illinois this year vs. Western Illinois) to schedule FCS programs when they only play 4 league home games.

So what’s the incentive?   Why do programs continue to schedule FCS programs?  Why does UofL?

The incentive for FBS programs is: A win.  What we at TheCrunchZone.com call “Scheduling Around the Myth”.  FBS programs schedule the FCS school to notch that extra W, some programs do it to make boosters happy, to ensure a bowl appearance, or in the case of a young FBS program they play an FCS school to get the jitters out of the way early and get game experience in their home stadium before getting to the meat of the schedule.  Oh and FBS schools pay for the privilege to play an FCS opponent often with values exceeding several hundred thousand dollars (sometimes well over $1M) which ends up making up sometimes to as much as 25% of an FCS team’s overall team budget.

For Louisville the Cards might have benefited playing Indiana State prior to Alabama (hello Illegal Substitution). As it happens though Louisville needs a game like Indiana State to re-group and everyone goes home happy (even Indiana State).

Must Have 7 Home Games

Athletic Departments (Like Louisville’s) rely on 7 home games in a season to fund the entire athletic department. As we’ve seen in recent years, sometimes it is difficult to find an FBS opponent willing to travel and play a home & home match-up and risk traveling to another venue.  Kentucky, for example, played 8 home games in 2015 & 2017.

An extra home game with 61,000 seats can net UofL an extra $3M on ticket sales alone, not including the extra revenue from parking, concessions, signage, or any other stream of revenue that may exist.  Louisville this year has 7 home games, and the Camping World Kickoff netted the program $2.7M without expenses (and also bought stadium construction an extra week).

Amend the Spring Game rules and play the FBS vs. FCS game or games in the Spring.  Sell tickets (include in season ticket packages), concessions, put it on Television.  Both programs get the the cash benefit, the fans get the benefit of getting to cheer on their school, and the programs can line up against another team that isn’t as familiar as its own. Losses don’t hurt FBS programs, and those programs can try and develop REAL game depth outside of practice before the season starts with some of the younger players.

This will appeal to the networks of individual conferences.  The Big Ten Network, SEC Network, Pac 12 Network and the ACC Network would all be able to broadcast their schools’ Spring Games adding valuable inventory to the networks.

Additionally the NCAA has set a precedent for this with baseball allowing schools to play other programs during Fall Ball.  This could lend itself well for college football.  Also we don’t have to limit this to just ONE game.  Programs regularly have intra-squad scrimmages in the Spring and bringing in another program could help preparation.

Lastly by playing the FCS game(s) in the Spring we free up an extra week during the College Football Regular Season and allow for playoff expansion to 8 teams (Five Power 5 Conference Champions, One Group of 5 entry if qualified, and 2 at-large).

Benefits of Playing the FCS Games in the Spring

Many reasons would be the same as above, but do this like the NFL.  Give the fans something to cheer about in the pre-season and include a practice session with the FCS school during Fall Camp.  Allow freshman who may play in just the 4 maximum games and retain their redshirt a chance to prove their value before the season and gain experience playing in a game inside their home stadium.  College Football is the only MAJOR sport (College & Pro) that does not have a pre-season.  Playing a single FCS game before the season would essentially be a dry run and there is less downside for the FBS schools.

Currently an NCAA rule does not allow either of these options for college football.  Hopefully the NCAA gets creative and comes up with a rule similar to the recently instituted college baseball rule that allows baseball programs to play other programs in scrimmages during the Fall.

If nothing else a rule requiring FBS schools to play ALL 12 of their games against FBS schools would be another step in the right direction in terms of clearing the way to finding a true champion and increasing the revenue of college football. Right now the FCS regular season game creates little intrigue.  So my vote (I don’t get one) is to 1) Move the FCS game to pre-season or Spring and maybe have more than one  OR 2) Require all 12 regular season games for the FBS schools to be against FBS schools.