It was 1952, Louisville wasn’t very good. Florida State was.

This has been the tune for much of the Louisville-FSU rivalry that currently sits in the Seminoles favor 12-2. Cards fans remember the epic “rain game” in 2002 when Dave Ragone and the Cardinals pulled a major upset over the at the time #4 ranked Seminoles. The goal posts came down.

Fewer Cardinal fans remember the first time Louisville beat FSU. I was there. That is a complete lie. It happened decades before I was born, but thanks to the book entitled “Johnny U, the Life and Times of Johnny Unitas”, we can read all about it.  However, let’s back it up a little and see how Johnny U got the starting job first. 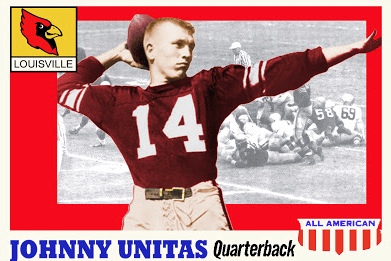 Johnny came to “the oldest municipal university west of the Allegheny Mountains”, a message the current day Marketing Team decided to move away from. Weighing only 145 pounds, Coach Camp thought Johnny Unitas was the water boy at the first practice. When play began – it was another freshman QB, Bill Campbell, that got the starting nod. Bill got hurt before the season began. UL wanted to turn to Junior Jack Browning, but he had an emergency tonsillectomy. Who did they go with in their third choice? You guessed it, Sophomore Jim Olmsted. All of this turmoil was before the first game; the Cards won 28-12 over Wayne State. Then the beatings began – Boston, Cincinnati and Xavier beat the Cardinals by a combined score of 124-13.

About game 5, Coach camp decided to give Unitas a shot. Ultimately making him Louisville’s 4th choice at QB in 1951. Down 19-0, Johnny U got hot. 11 straight passes, 3 for Touchdowns. Cards lost on a controversial ending. A game that had 3 endings. The first when UL celebrated the 21-19 win, the second after the time keeper found a few more seconds to put on the clock and the opponents missed a FG (another UL celebration ensued), and the 3rd after the refs threw a flag giving the opponent 2nd at the FG to win 22-21. Johnny U went on to beat NC State, Houston, Washington & Lee, and Mississippi Southern. UL finished the season 5-4; 4 straight wins and Johnny U was solidified as the starting QB. An offseason car accident, in combination with 15 players flunking out decimated the team, and 1951 would be Johnny U’s only winning season at UL.

Down to 19 total players on the team the cads had to fill some spots with walk-ons. Larry “Bumpy” Simmons would make history for UL. He would become Louisville’s first player to break the color line at Louisville – 14 years before the University of Kentucky. He played in the 4th quarter of Louisville’s season opening win over Wayne State. It wasn’t considered safe enough for him to travel south. Louisville had quite a few southern games lined up – so Larry didn’t get in enough games to letter. This is primarily why Lenny Lyles is given credit as Louisville’s first black football player. He was the first to letter. If you asked Lenny – he would always respectfully recognize Bumpy being the first.

Louisville caught a break. One platoon football returned this year. Not bad for a team down to 19 players. The 1-0 Cardinals headed down to Tallahassee and grabbed a miracle win 41-14. Johnny was nothing short of spectacular going 16-22 for 198 yards and 3 touchdowns. It would be the last big moment for the team that year, only beating EKU the rest of the way. Johnny U was so beat up by the end of the season he could barely hold up his arms.  There is more to Johnny U’s story at UofL, but I am ending here with the 1952 season.

1 year later the new Florida State QB was amazed after watching Johnny’s film against FSU the year before; “You should have seen him. Holy Mackerel this guy was good, Not fast, but quick. The Seminole’s didn’t have an answer for him”. Who was that new FSU QB complimenting Johnny Unitas? Lee Corso.

After the 1952 season, Johnny U almost transferred to IU (then in the Western Conference).  Seeing the writing on the wall with a depleted team, he earned respect for his play on the field and they asked him to visit. He did.  Indiana had many big time opponents on the schedule he could square off against.  He thought long and hard. Talked to sports writers, coaches, and friends. In the end, Johnny U stayed with UL.  In Johnny U’s own words, “These people took me in when nobody else wanted me. I am staying here”.

Louisville heads into Thursday night’s game an underdog to another powerful Florida State team.  The Seminole’s are boasting a National Championship and Heisman winning QB and 23 straight wins.  It should be a great game.  Johnny U can’t help us – but that statue might crack a smile if the Cards can pull off win #3.  After all, he started the existing 14 game FSU/Louisville series off with a win.

Information in this story taken from “Johnny U, the Life and Times of Johnny Unitas”, by Tom Callahan.