The Atlantic Coast Conference unveiled its championship sites for the 2015-16 academic year on Thursday as the league concluded its annual spring meetings.

As previously announced, the Dr Pepper ACC Football Championship Game will be played for a sixth straight year at Charlotte’s Bank of America Stadium on Dec. 5. The Verizon Center in Washington, D.C., will welcome the New York Life ACC Tournament for the second time – and the first time since 2005 –March 8-12.  The Greensboro Coliseum will play host to the ACC Women’s Basketball Tournament (March 2-6) for a 17th straight year.

Meanwhile, the ACC Baseball Championship is set to return to Durham Bulls Athletic Park in Durham, North Carolina, for the second straight year and the fifth time in eight years onMay 24-29, 2016.

The first ACC championships of the 2015-16 season will be held on Friday, Oct. 30, as Florida State plays host to the Men’s and Women’s Cross Country events.

In a change from previous seasons, all four rounds of the 2015 ACC Men’s Soccer Championship will be held at campus sites, with the higher seeded teams serving as hosts for each game. The first round is set for Nov. 4, followed by the quarterfinals on Nov. 8. Semifinal games will be played Nov. 11, followed by the championship match on Nov. 15.

The Greensboro Aquatic Center (GAC) will play host to the first ACC championship of the 2016 calendar year on Feb. 17-20, when it welcomes ACC Women’s Swimming and Diving, as well as Men’s Diving. The venue will also serve as home to the ACC Men’s Swimming Championship Feb. 24-27. Next February will mark the beginning of a seven-year association between the conference and the GAC, as it was announced on Thursday as that the venue will also serve as the host site for the ACC Men’s and Women’s Swimming & Diving Championships from 2017 through 2022.

Notre Dame is set to host its first-ever full ACC Championship on Feb. 27-28, when the conference’s four fencing teams are set to battle for the league title.

The ACC Men’s and Women’s Indoor Track and Field Championships will be held at the Reggie Lewis Center in Roxbury Crossing, Massachusetts, on Feb. 25-27. Virginia’s John Paul Jones Arena will play host to the ACC Wrestling Championship on March 5 or 6.

The Cary Tennis Park will welcome the ACC Men’s and Women’s Championships for an eighth straight year April 20-24.

The ACC Softball Championship is scheduled May 12-14 at NC State. Florida State will host the ACC Outdoor Track and Field Championships for a second straight year on May 13-15.

The ACC Women’s Rowing Championship will return to South Carolina and Clemson’s Lake Hartwell on May 13-14, with the ACC Baseball Championship in the final week of May bringing down the curtain on the 2015-16 sports season.

The ACC is currently wrapping up a successful 2014-15 academic year, with three conference Championships remaining on the spring schedule and a number of teams and student-athlete currently competing in NCAA play. The ACC Outdoor Track and Field Championships are set today through Saturday at Florida State, and Clemson will play host to the ACC Rowing Championships on Friday and Saturday. The ACC Baseball Championship will be held May 19-24 in Durham. 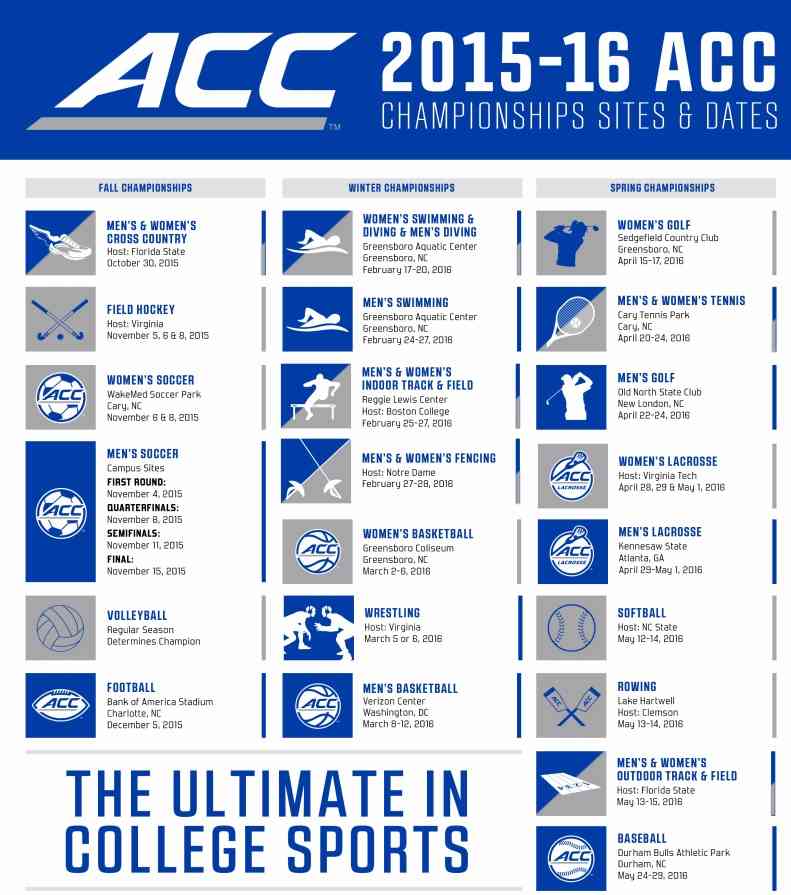