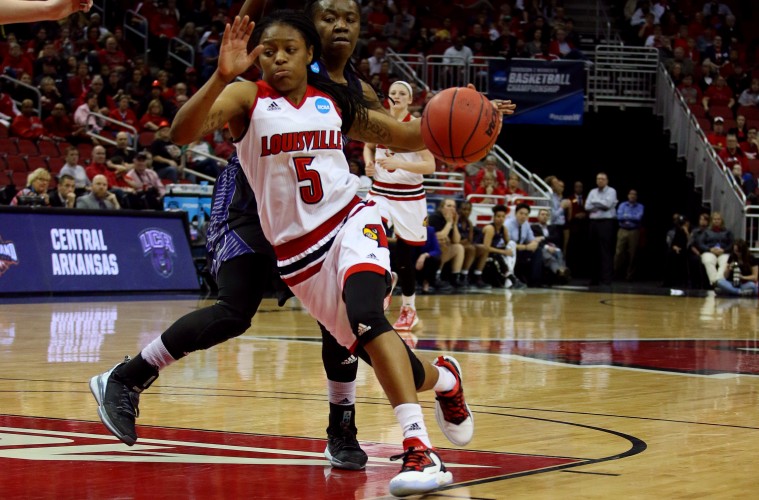 #8 Louisville Squares Off vs. #20 DePaul in NCAA’s 2nd Round

Louisville and DePaul are meeting for the 32nd time in series history, having last played during the 2012-13 season in the BIG EAST.

The Cardinals earned an 81-55 victory in the KFC Yum! Center on Feb. 17, 2013. Louisville connected on 43.3 percent of its shots from the floor and avenged a loss at DePaul from earlier in the year. Louisville grabbed 50 rebounds in the win and held DePaul to 24.6 percent (16-for-65) shooting.

Sophomore Bria Smith led the way for the Cardinals with a season-high 21 points, including shooting 13-of-15 from the free throw line. She also had seven rebounds. Sara Hammond added 17 points and 13 rebounds for her fifth double-double on the season. The Cardinals had six players with eight or more points. Chanise Jenkins led the Blue Demons with a career-high 16 points, while Megan Podkoa added 14 points off the bench.

The University of Louisville women’s basketball team is heading to the NCAA Tournament second round for the sixth-consecutive season, and the Cardinals meet a familiar foe in No. 20 DePaul on Sunday in the KFC Yum! Center.

The two programs met 31 times previously, both as members of Conference USA and the BIG EAST. DePaul currently holds a 16-15 advantage, but Louisville has won six of the last nine contests.

No. 8 Louisville (26-7) defeated Central Arkansas 87-60 on Friday afternoon, marking the Cardinals’ eighth-consecutive victory in the opening round under head coach Jeff Walz. Louisville finished the game 54.8 percent from the field and dished out 22 assists, the most in a tournament game in program history.

Myisha Hines-Allen scored a game-high 25 points on 12-of-17 shooting, her 12th game with at least 20 points. Her point total is the seventh most in an NCAA Tournament game in school history, while her 12 field goals are tied for the second most in a tournament contest. Mariya Moore added 16 points and four assists, and Sam Fuehring added 12 points and four assists.

Dakota Weatherford made a significant spark defensively from the bench, and she finished with seven points, three steals, and two rebounds.

DePaul (26-8) beat James Madison 97-67 earlier in the day, connecting on 11 3-pointers and shooting 53.6 percent from the field. The Blue Demons collected a season-best 55 rebounds and totaled 24 assists.