Part of the excitement of college football is looking forward to the upcoming season. Spring practice gets the juices flowing for any fan of a program. Last season the Cards entered the ACC and had a reasonably successful season. What can we expect in year 2?

The improvement in year-2-Petrino Teams is pretty astounding and certainly encouraging for he upcoming season. What follows is a table that shows the Year 1 versus year 2 performances in the major statistical categories, plus a brief analysis. This also a (non-scientific) projection of what this season can look like statistically.

Numbers are represented as “per game” performance. 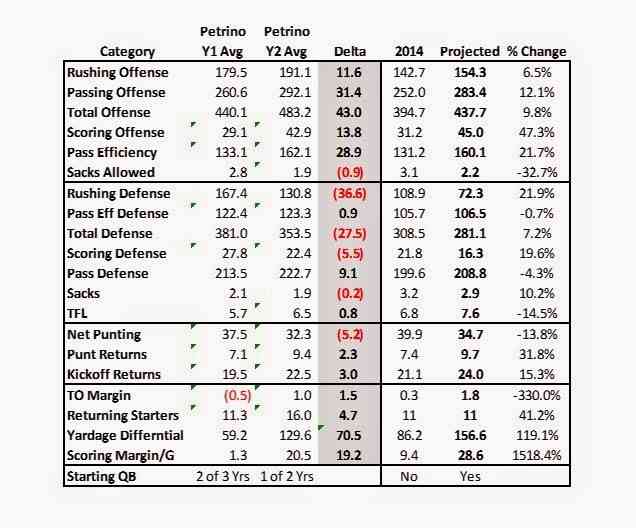 In year 2, Petrino-coached quarterbacks have a dramatic improvement. Whether it is a returning starter (the most significant improvement) or one who has been in the program a year as a backup, the efficiency rating jumps from 133.1 to 162.1 (28.9 points). The national average QBR is approximately 131 each year. Last year, the Cards QBs had a combined rating of 131.2; all are coming back with playing and starting experience, plus Tyler Ferguson has had a year to learn. This is very encouraging and shows promise for the upcoming season. More on this topic as the preview article come together.

The overall improvement in team performance is as impressive. Scoring margin jumps 19.2 points, Yardage differential improves by 70.5 yards per game. Priorities have been made on effectively running the football and stopping the run on defense. Bobby Petrino has a simple philosophy about running the football and stopping the opponents run game on defense…… it is the core of how his teams succeed. The high octane offenses he produces are based on the run game and being able to pass out of the same formations.

The potential issues with the Cardinals this upcoming season are mainly the offensive line and how they will perform against some of the attacking defenses they will see. While Petrino’s offenses give up less sacks in year 2, they are typically returning a good portion of their offensive line. This season is a rebuild and will take Coach Klenakis’ development of the returning and incoming linemen to make the difference. The size, strength, and speed are there; they will have to find the right combinations of personnel to make the difference.

Finally, the receiving corps have been a question mark as well. Without Devante Parker and the senior group that is leaving, there seems to be some concern about filling that gap. Remember this card fans, how many times, in their best years, did a receiver come out of the woodwork to surprise teams? More than I can list. The current group has size, speed, and, by most accounts, excellent hands. This could be a year where the talent and work ethic will offset the lack of returning starters.

If the offense can improve to the level that is expected and the defense can be as dominant as they are thinking; this could be a surprise year. This level of performance translates to 10-11 wins using the aggregate Pyth method.