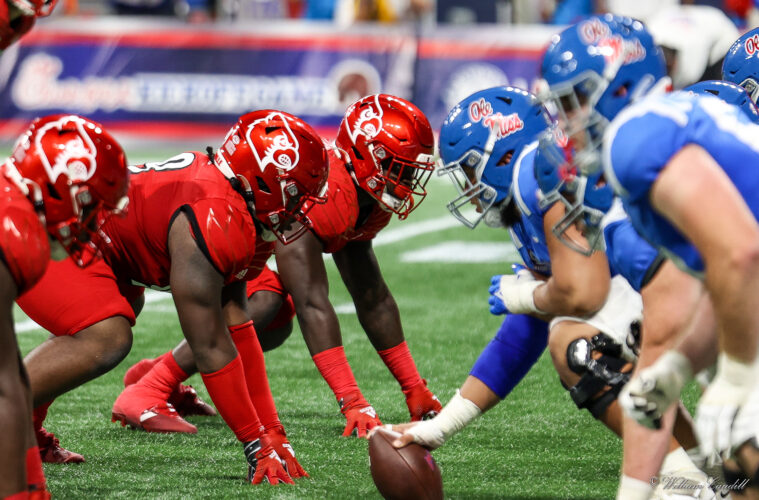 SCOTT SATTERFIELD: I mean, first of all, just give credit to Ole Miss. I thought they came out and played out and played a really good game offensively and defensively, and we didn’t play good enough, bottom line.

When we had a couple of opportunities there in the game and didn’t take advantage of them, we’d get a holding penalty or we’d drop the pitch on an option play that probably would have scored.

That’s the kind of offense you want to see.

Q. That first half offensively, I know you guys had a lot of questions coming into the game; what do you think went wrong? It looked like it was just everybody was just at fault.

SCOTT SATTERFIELD: Well, sometimes when you play obviously a first opponent you don’t know exactly the things they’re going to be doing defensively.

They had been talking about how bad their defense was all off-season and how good their offense was if they can get anything cleaned up. We knew things were going to happen and be different on defense.

We never got in a rhythm in the first half. We never got the sticks moving. And I think obviously when you do that, like we did in the second half, then everybody feels more comfortable, and you’re in more of a rhythm and you can move the football and go score points.

We didn’t have that in the first half probably for a lot of different reasons. It’s not any one player. It was overall as an offense.

Q. Was there anything said or done with Malik to settle him down and get him where you wanted him in the second half?

SCOTT SATTERFIELD: No, I think our coaches did a good job at halftime of figuring out what we needed to do with trying to get some easier throws, which obviously you want to do that from the beginning of the game.

We didn’t do it. I mean, we’ll take the blame for that. And second half I thought we had some god things designed that enabled good completions, and he started settling in and played really well in the second half.

I take more of the blame than that for anything. I think the second half, the way the guys ran routes, caught the football, ran after the catch, I thought was really nice and good to see, and we’ll build off of that.

Q. You struggled to get your running backs going today. You had to kind of run with Malik mostly. That was the reason for that and how do you fix it?

SCOTT SATTERFIELD: Yeah, I think the way they were playing their defense, they were three down defense and really keeping everything contained with the edges and in the middle, so really kind of presented itself with some cue runs and up-the-middle type runs with the quarterback, even in scrambles because if we’re releasing four or five guys in a route and they’ve got eight guys covering, sometimes the quarterback is going to have to run.

That’s what happened. I think that is why his carries were a little bit more today as opposed to what the running backs normally get carries-wise.

And then we probably could have stuck with the tailbacks more so, but then the game we’re down two or three touchdowns so you’ve got to continue to spread out and try to throw the ball, get the ball down the field.

Q. You mentioned that second half was obviously much better; Malik was in rhythm. What can you do as a play caller to get Malik in rhythm earlier in the game?

SCOTT SATTERFIELD: Well, I think moving forward as we — you’re seeing these teams now there’s a game under their belt, we’re going to see kind of what teams are doing, how they’re going to try to defend us.

This will be a great learning for Malik, too, and our offense to see how they defended us early in the first half, and they didn’t change their defense. They stayed the same defense the whole game.

Our guys did a great job of adjusting and moving forward in the second half. Really and truly kind of what we did in the second half I think obviously is what you want to do against that, and if the game is in hand then we are going to be able to run the football.

I thought at times we had some really nice running lanes with the running backs off the edges, and we we’re not able to stick with that and continue that just because the game got out of hand a little bit.

Q. What were the adjustments that you made at halftime as it specifically pertained to the offensive line? It seemed like in the first half Ole Miss was able to get a lot of pressure, even in three and four-man fronts.

SCOTT SATTERFIELD: You know, really it wasn’t a lot of change up front as far as scheme or anything we were doing. I think what we were able to do was try to find some formations and some routes that were getting guys free, and now Malik is able to get rid of the football and not have to hold the ball.

That’s probably the biggest thing. We didn’t change anything up front. The guys continued to block the same way, and the guys did a better job in the second half I think really is what it came down to.

Q. There were a couple mistakes in that first half, like the trick play where Malik had blockers upfield probably could have gotten more; there’s the pitch that Hassan drops. When you’re seeing those live, what do you attribute those to, just a mental error thing?

SCOTT SATTERFIELD: Well, the throw by the quarterback, he got nine yards. I’ll take that. Obviously you want to score on every play, but we’ll take nine. The pitch was — he took his eye off the ball. You’ve got to catch the ball. We do it every day in practice, catch the ball.

But he snuck a peek down the field before he caught it. That’s almost certain a touchdown in that defense.

You know, you’ve got to let the guys go out there and play, and everything that you work on in practice and get better every single day, but we expect them to make all the plays in a game.

Q. Negative 2 in turnover margin today. You mentioned the fumble, but you got your hands on some pass breakups but weren’t able to get one on your own. How frustrating is that?

SCOTT SATTERFIELD: Yeah, I mean, you obviously don’t like it. I think the one interception there we wanted to take a shot and get the ball down the field, and we had a guy out there, the backside safety came over and made the play.

It was a good play by their guy, and obviously the fumble, again, that’s something we work on every day. He just didn’t catch the football on that option that would have scored.

Q. Kind of a two-parter here. One, I know obviously the receivers are kind of a work in progress to figure out who’s your guy, who are the guys out there, but what did you learn about them today? And obviously targeting played a big part in today. What were your thoughts on that in the first half?

SCOTT SATTERFIELD: Yeah, I thought, again, referring to the second half, I thought Braden Smith I thought played solid, played a good game.

I thought Watkins, he’s a really good receiver. He did some good things.

I think Ahmari Huggins did some good things tonight. I think he’ll continue to grow and develop as a player. I think he’s going to be really good.

Marshon Ford was more involved, as well. I think he’s going to be obviously a guy we want to throw the ball to, four catches.

As far as the targeting goes, I’ve never seen four targeting calls hold up in one game, two and two. And then it’s hard, man. Like several times their quarterback went to go run and he’s running right at our defenders and he goes to slide and our guys were running full speed at the quarterback.

It’s hard to pull up. It’s hard to avoid hitting him, and that was one of the targeting calls. And then he did it two or three other times and they could have called those probably, maybe not targeting but a defenseless player. I think that’s extremely difficult to defend that.

It’s unfortunate with all the targeting. I don’t like it. It’s not a good look. We want to keep the game safe. But when you’re going helmet to helmet or you’re lowering your head, the crown of your helmet to hit someone, we don’t teach that, we don’t want to do that.

One of our targets was on a block. TP was going to block a guy, and they hit helmet to helmet. I get sometimes it’s going to happen; we don’t like it. We’re coaching against it, and we’ve got to get better with that because those penalties are crucial and they obviously hurt you.