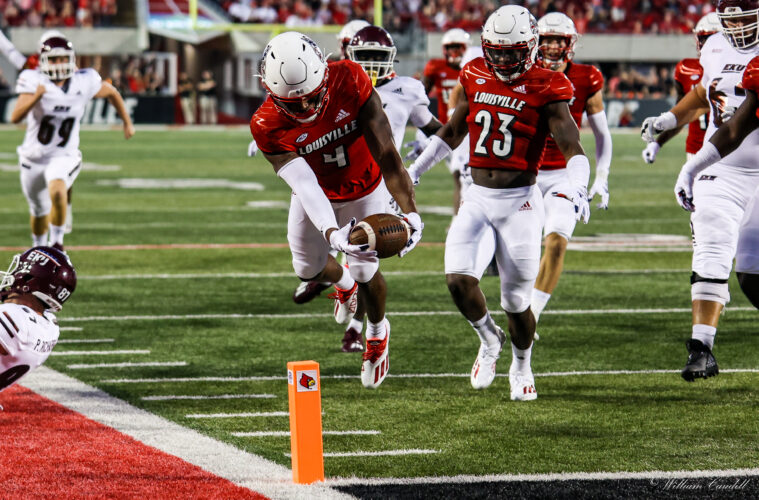 “Man it’s good to get a win, there’s no question about that. We all like winning. I’m proud of our guys with the way they came back off a tough loss on Monday night. And on a short week, to be able to come back out. They started getting fresh again toward Thursday and then Friday had a good day of practice. And I thought they came out and played hard tonight. Defensively, we really had a good night. Kei’Trel Clark, in particular, I thought he played awesome out there on the edge. He had some deflections and some interceptions and some great tackles coming off those little bubble spot screens they were trying to run. Overall, I just thought our defense played well. We gave up the three points on the one play when they had third down and we get the PI (pass interference) call, and that put them in field goal range, but that’s pretty much it, what they did all night. So I’m proud of that. Offensively, we did some things that were good tonight and also some things that were just average. We got to get a lot better as we move forward. But, we won the turnover margin, which was nice. Overall, I’m just proud of the guys coming back to get the win and we know we got to do it again this week. It’s a short week, we’ll get back in here tomorrow and start working on Central Florida.”

(What were your thoughts on the offense?)

“I thought Malik came out and played solid. He sat in the pocket and that’s what we wanted him to do this game, to go through his reads and make his throws. I thought he looked a lot better at that. I think the running game, it struggled sometimes, but I did think we hit some good runs in there. I thought (Jalen) Mitchell ran hard again. I thought he did Monday night, as well. He’s a big back, he’s got good vision. He had a nice catch and went down the sideline, so you know he’s very solid there. I thought (Trevion) Cooley got a few more touches tonight and did some really good things. We played a lot of guys up front and I think that’s a positive, and we needed to because we had a couple of guys that got dinged, so we subbed them in. The positive is those guys still played at a high level out there. I thought they did some good things. They protected well. It’s good to see some of the receivers make some plays. Ahmari (Huggin-Bruce), that play was unfortunate. He did the hard part, the heavy lifting was outrunning the entire defense and the easy part, anybody in this room could just carry the ball across the line, but that’s unfortunate for him. But, he still had a great night. He’s a very good playmaker with the ball in his hands. He’s got exceptional speed and quickness. It’s just a shame he didn’t get a touchdown on that particular play. Overall, we know we want to get better offensively and we’ll continue to work on it.”

(How would you assess the offensive line play?)

“We want to get better. We’ve got high expectations for them. II think tonight it was solid, we protected well. They brought a lot of pressure tonight and our guys did a pretty good job of picking all of that up.  In the run game there were several times tonight they did a really good job. And then there was a couple of times when they did bring pressure and the offensive line has got to out it and work toward the pressure and we didn’t do that, we’d leave one guy off the edge which they got to see that and pick that up. Those are the kind of things, if you don’t get fixed then teams are going to do it. So, we got to shore that up. (Michael) Gonzalez is a true freshman and he was out there one time that happened. You know it’s just learning for him, but it’s not just him because it was the left side, as well. Those are the things we got to get better at.”

(On the punt return for the touchdown, it was a short punt and a low one, do you have any trepidation about him fielding that in those circumstances?)

“Working on their punt team this week was different. They do some rugby, and they also do the traditional punt, so we worked on fielding those types of punts this week. What they are trying to do is let the ball hit the ground so it’ll roll another 25 yards. I thought Braden Smith did an excellent job this evening fielding those punts, because some of those punts could have gone 15-20 more yards and particularly on that one. Sometimes they think it’s going to roll out, so it hit the ground once or twice and then they relaxed and he was right there to catch it and that’s when he scored. I have a lot of confidence in Braden. He is a smooth operator back there. He has a lot of poise when it comes to fielding those punts. That’s not easy to do, he just has a good knack for it, and I like the way he did that tonight.”

(In the run game, what do you think you need to do to be able to move the ball on first and second down and even third and short, a little more consistently?)

“It’s just getting the blocks. It’s execution, really. They were doing a lot of movement tonight, extending the front, moving the backers down, moving the line over. Things happen fast and we work on those things, but we have to get better at it. The first short yardage that we didn’t get, the backside backer played over the top, our line didn’t work up to that backer. We just have to get better at it. We just have to be more smooth in our execution, that’s the bottom line.”

(On having more big plays)

“One of the things we came out of the game against Ole Miss was we needed to take more deep shots. Even though they were dropping eight most of the night and were trying to keep everything in front, but we still have to take some shots down the sideline. We took one and we threw a pick, maybe that’s why we didn’t take many more. Tonight, coming into the game, we felt how they were playing us coverage wise enabled us to take more shots. It depends on how the defense is playing it, but we certainly want to take more chances with some of the balls down the field. We didn’t hit on all of them, but we hit on a few.”

“The first or second drive he got out and hit Braden Smith on a nice first down. I thought that was good, but we wanted to keep his eyes up. Once we go back and see the tape, we’ll be able to see how he did, but I thought that was pretty good on that play and he did it a couple more times throughout the game. Our receivers have to work to get open as well and work in those windows. He can put so much pressure on defenses with his legs, and they’re going to come up and you’re going to have some opportunities with that. We want to get better when he is outside of the pocket making big plays down the field.”

(This offense has been a work in progress, but what’s the next step before a pretty big game for you guys next week against UCF?)

“We want to continue to take care of the ball. I thought that was big tonight. Offensively, we have to do much better on third down. We were not good on third down tonight at all. I think that’s one thing we certainly have to get better at because we’re going to have to sustain drives. One thing we know about Central Florida is they’re going to go fast. Offensively, one of the best things we can do is keep their offense off the field so if we can keep drives sustained, that’s going to help us, but third downs have to get a lot better. That’s obviously something we have to really focus on this week so we can keep drives moving.”